Tara Deschamps The Canadian Press Published Thursday, May 24, 2018 7:24AM EDT 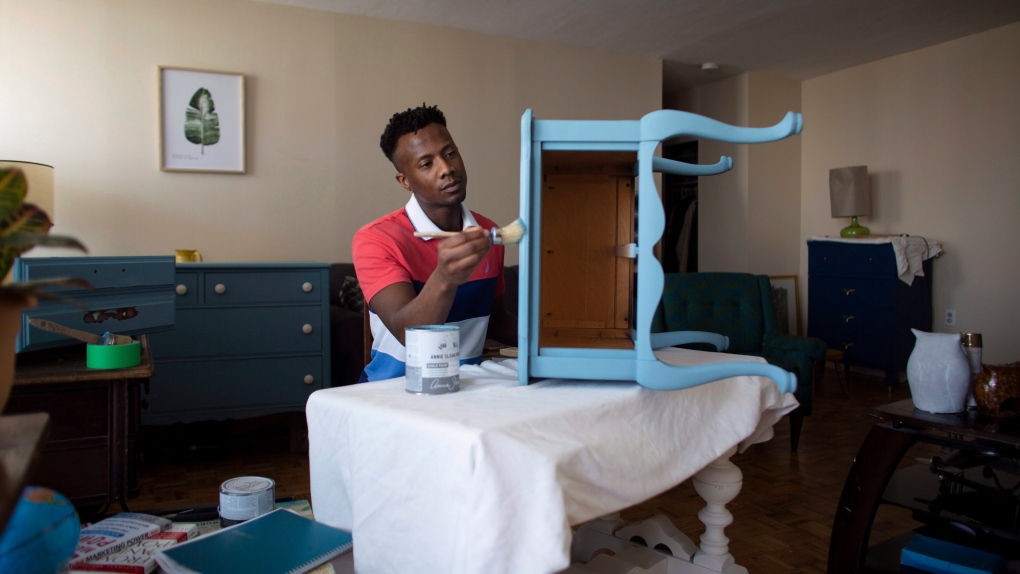 Kbre Hamilton, who runs an online business selling antique furniture, refinishes a table in his Hamilton apartment on Thursday, May 17, 2018. THE CANADIAN PRESS/Peter Power

TORONTO -- Kbre Hamilton has long worked as a model and a tavern server, but five years ago when he snagged a dresser at a garage sale and gave it a coat of Emperor's Silk red paint and some new knobs, he stumbled onto a new way to make money.

The 33-year-old opened Hamilton, Ont.-based custom furnishings business Fresh Furniture Co. -- but he didn't bother to set up a storefront to enter the market. Instead he grabbed a phone, snapped photos of his pieces and started selling directly on Facebook and Instagram.

"I haven't done a storefront because of the cost," said Hamilton. "I did have a website, but far more people were engaged in the social media. That is where I get most of my clients and referrals from."

The entrepreneur's decision to sell solely on social media is quickly being embraced by others who want to minimize costs, responsibilities and risk of failure. Social media giants are also hungry to cash in on the trend that provides them with another avenue to drive clicks and ultimately, profits.

In recent months, social platforms have rolled out a handful of retail-friendly features.

In March, Instagram started offering Canadian businesses a feature that lets users tap on photos of products or people and learn more information about the items or be linked to a spot where they can buy them. It helps companies increase sales because users can easily and instantly make a purchase without having to leave the platform or start searching for the item online or in store. Companies also gain access to data on how many people are tapping to see or buy their products.

Instagram is also experimenting with allowing customers to make reservations or appointments through the app.

"We are probably in version one of what shopping can be," Susan Rose, Instagram's director of product marketing, said.

"You no longer need a brick-and-mortar store to get off the ground," she said, adding e-commerce businesses can decide later if they want a physical location or pop-up shop.

In September 2015, website host GoDaddy research showed 59 per cent of Canadian small businesses don't have a website -- with 41 per cent believing their companies were too small to warrant one.

However, within the next few years, a handful of successful online businesses -- mattress purveyor Casper, eyeglasses company Warby Parker and apparel brand Frank and Oak -- started moving away from their original business model towards opening bricks-and-mortar locations.

UPS Canada Ltd. also released a study, saying that 40 per cent of online shoppers in Canada search for products in one channel, but purchase via another. The April study also found that 77 per cent of the 18,000 consumers it surveyed were satisfied with online shopping, but only 59 per cent felt the same way about their in-store experiences.

Most businesses operating primarily or solely on social platforms are small artisans or entrepreneurs drawn to the low cost and ability to experiment with little risk, said David Soberman, a University of Toronto marketing professor.

"This doesn't seem like something an $8- or $9-million business would do," he said.

The concept of operating a business solely on social media is still in its infancy, he said, adding that it comes as shoppers have increasingly become more comfortable with online shopping and buying from smaller companies whose credibility can't always be reaffirmed with a Google search or a trip to the mall.

Ottawa-based e-commerce giant Shopify as well as handmade and small goods seller Etsy enabled many such companies. Both started to help small business owners find a cost-effective way to enter the retail market. Etsy charges listing fees around 20 cents and a 3.5 per cent transaction fee for purchases in Canada and the U.S. Shopify offers access to its platform and technology in packages starting at $29, but that comes with transaction fees between 2.4 and 3.5 per cent plus a 30 cent charge, depending on the credit card used to make a purchase.

But Soberman noted that there is fierce competition to corner the online shopping market because social media giants can use it to generate more traffic for their ads, which is a big chunk of how they make their money.

"I think in the longer term all of these social media platforms worry about being overtaken or being made obsolete, like Myspace. If you don't have the functionality or the bells and whistles like the competitors, you risk falling behind."

Hamilton said he has thought little about how social media companies are courting entrepreneurs or what they could do to increase business owners' use of the platform because it brings him thousands more clicks than he got from his website, when it wasn't under construction, as it currently is.

It has also driven dozens of people to request custom painting jobs from him and inspired a potential second business idea that taps into another passion of his: selling vintage clothing.