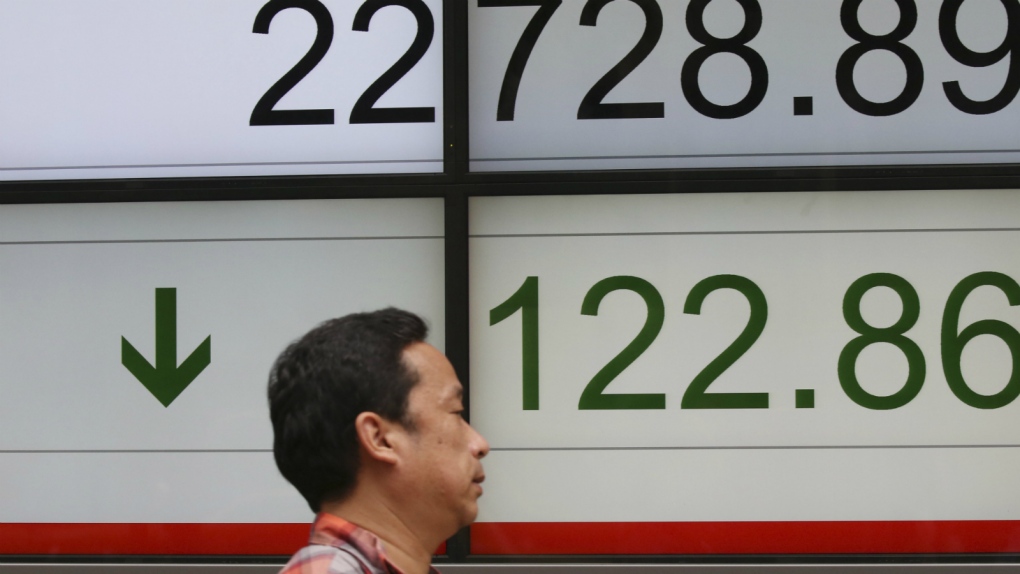 A man walks by an electronic stock board of a securities firm in Tokyo, Monday, June 18, 2018. (AP Photo/Koji Sasahara)

Trade tensions between the U.S. and Canada have also escalated recently after U.S. President Donald Trump threatened to impose tariffs on auto imports.

"We're seeing the loonie is being weighed down by escalating trade tensions, which has arguably complicated the status of NAFTA negotiations."

The drop in the loonie, which started last week at over 77 cents US, is part of the widespread impact trade uncertainty with the U.S. has caused, said Bangsund.

"The Canadian dollar, Canadian interest rate, even equity market have all been unfairly punished due to this overhanging uncertainty on NAFTA. Our expectation is if we do get some sort of clarity on the NAFTA front, investors can look past that uncertainty towards the fundamentals, which actually do support a stronger Canadian dollar, higher stock prices, and higher interest rates in Canada."

The rise in oil prices came as speculation around the Organization of the Petroleum Exporting Countries (OPEC) meeting later this week shifted towards a more limited increase in production in its efforts to make up for dropping output from Iran and Venezuela.

"Today the news was that we could expect maybe a smaller increase or boost to production to offset those declines, so the market is obviously taking some comfort that these OPEC-plus producers aren't going to flood the market," said Bangsund.

The market was risk-averse after Trump said Friday he would impose tariffs on Chinese goods, with China responding with planned tariffs on $34 billion worth of U.S. goods.

"That stepped-up protectionist rhetoric that we've been hearing from President Trump has really intensified the trade dispute between the U.S. and China last week, on Friday. In general this is weighing on sentiment here today."