Emirates to get 30 Boeing 787 Dreamliners for US$8.8 billion 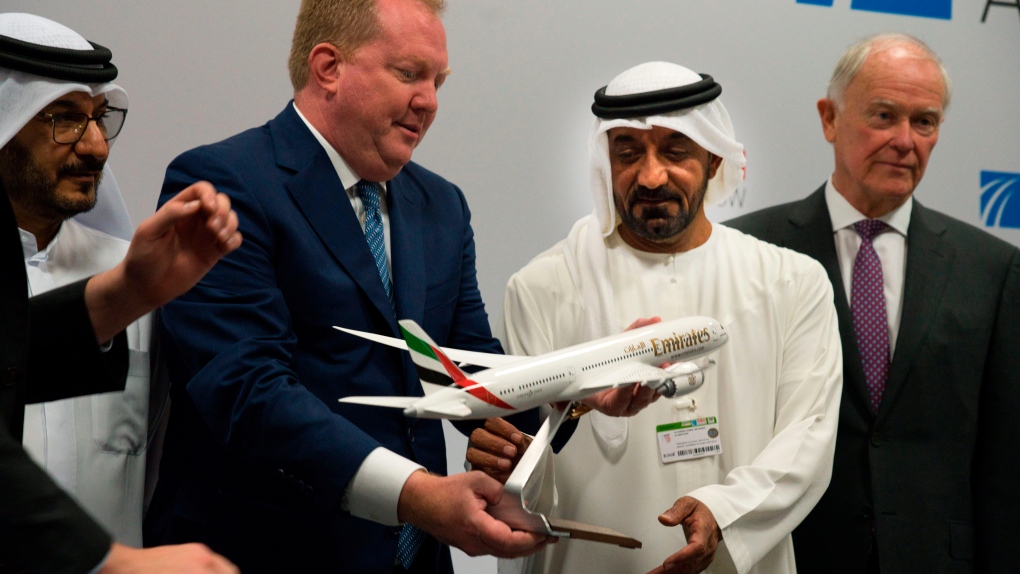 DUBAI, United Arab Emirates -- The Middle East's biggest carrier, the Dubai-based Emirates, announced on Wednesday a firm order for 30 Boeing 787 Dreamliners in a deal valued at US$8.8 billion.

The order, however, does not represent additional spending by Emirates because it replaces a previous agreement with the Chicago-based plane manufacturer at a near trade at list prices, which are negotiated by airlines.

Earlier at the airshow, Emirates announced it would be buying 20 wide-body Airbus A350s, bringing its total order for the aircraft to 50 in an agreement worth $16 billion at list price. That deal, however, replaced a $21.4 billion agreement struck in February to purchase 70 Airbus aircraft, which had included 40 of the A330neo.

Overall, Airbus netted around $38 billion in new plane orders at the airshow this week to Boeing's roughly $17 billion, though not all are firm orders. Around $20 billion of these commercial purchasing announcements were made by low-cost carriers.

The Dubai Airshow, which opened Sunday and is the Middle East's biggest aviation event, has seen the region's flagship Gulf carriers rein back big-ticket purchases as they face industry headwinds from lower airfreight demand to weakened travel demand in the region. The big Gulf airlines also have multiple existing orders on planes yet to be delivered.

Still, Boeing announced 60 orders for the jet this week, signalling a vote of confidence among some airlines for the Max that's been grounded around the world following crashes that killed 346 people. Boeing said Wednesday an order for 20 came from an unidentified customer.

The crashes, in October of last year and March, raised questions about pilot training requirements and the plane's new technology, particularly an anti-stall software that pushed the planes' noses down.

Boeing has said it hopes to have the Max certified by the FAA and flying again by January, before other regulators around the world follow suit.

FAA Administrator Steve Dickson told reporters at the airshow Wednesday that the regulator will not be pressured on time.

"As a regulator, there's certain things that we have to do, but time pressure can't be one of them," he said. "We've got to make sure that we do everything the right way and do it the complete way."

He said his message to the FAA workforce is to understand "that we need to run every step of the process." When asked if the plane would be certified by January, Dickson said: "It remains to be seen."

"I'm not going to commit to a timeline," said Dickson, who was sworn-in to the post for a five-year term in August.