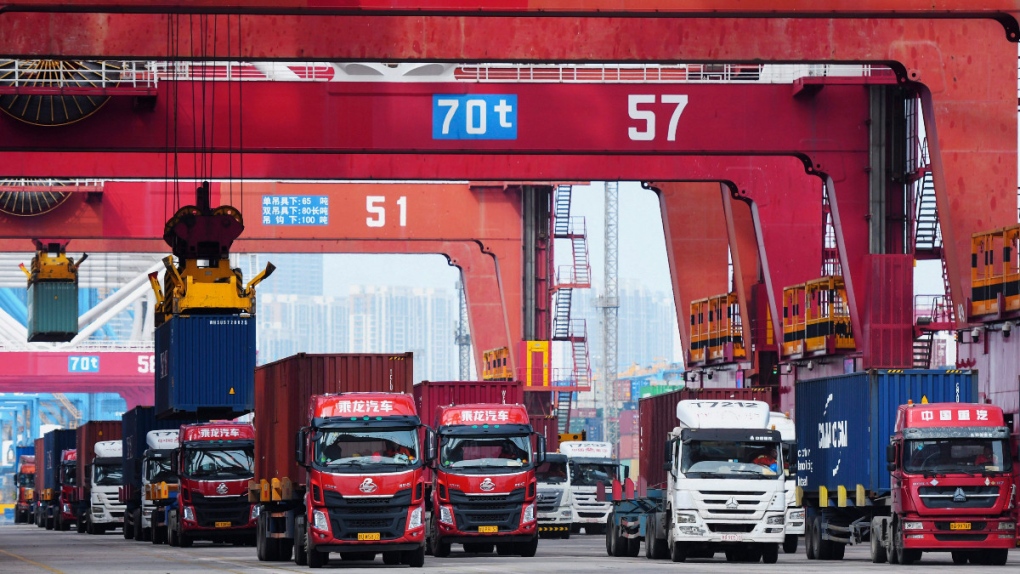 Trucks line up to transport containers at the container port in Qingdao in eastern China's Shandong province, on June 2, 2020.(Chinatopix via AP)

OTTAWA -- Export Development Canada is forecasting that exports this year will fall 20.3 per cent due to the COVID-19 pandemic.

In its updated global export forecast released Thursday, the agency says exports will bounce back in 2021, but the predicted rise of 19.0 per cent will leave them short of where they were in 2019 before the crisis.

"When it comes to the global economy, an annual decline is extremely rare," EDC chief economist Peter Hall said in the report.

"It's not common in a world recession, and when it happens, the number is usually pretty small. Now, forecasters are leapfrogging each other to be more negative."

The drop EDC is bracing for this year is expected to include a 30 per cent plunge in automotive exports and a 33 per cent drop in the energy sector. Aerospace industry exports are forecast to fall 35 per cent.

The prospect of a near-term price rebound in oil and gas is unlikely because any significant increase in demand is expected to be met with a surge of supply. Crude oil shipments, however, will remain suppressed, the report forecasts.

Meanwhile, the auto sector is expected to manage a 22 per cent rebound in exports next year, but the rise won't get it back to pre-COVID levels. Aerospace will see a meagre six per cent gain in 2021.

Excluding the energy and auto sectors, exports are expected to be down 14 per cent this year.

Only two sectors are expected to show single-digit percentage declines this year.

The agri-food sector is forecast to fall eight per cent, while the consumer goods industry is predicted to drop nine per cent.

They have been the beneficiaries of Canadians stocking up as the pandemic swept the country, EDC said.

"If there's any good news, there's plenty of demand for most, if not all industries when this is all over," said Hall.

"That makes survival all the more important, regardless of the sector."

This report by The Canadian Press was first published June 18, 2020