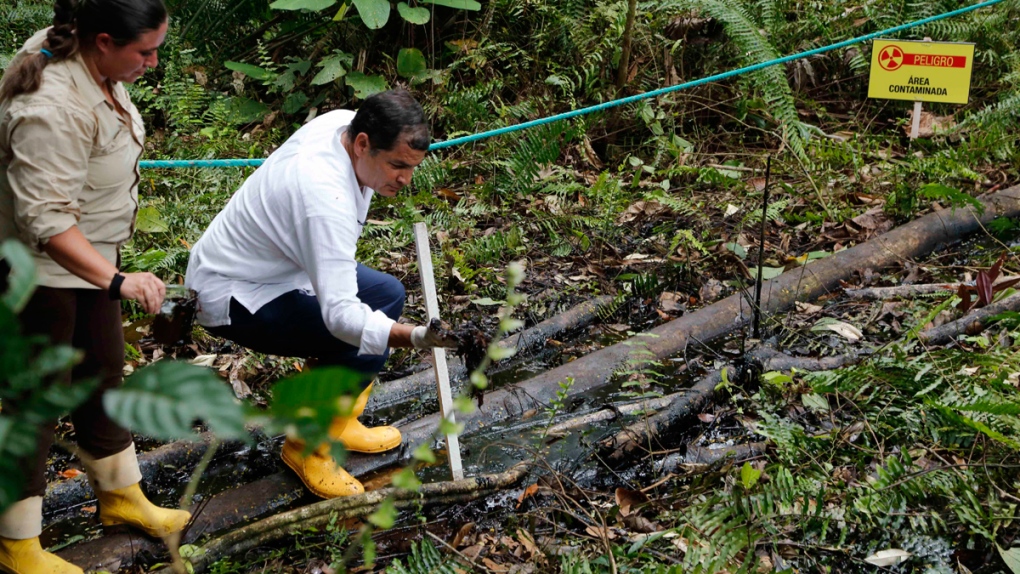 TORONTO -- Lawyers for a group of Ecuadoran villagers are asking Canada's high court on Thursday to grant their clients access to Canadian courts to enforce a US$9.5-billion Ecuadorian judgment against Chevron Corp for rainforest damage.

Lawyers have fought for years in several countries over who's responsible for pollution in the rain forest. They are arguing that the case should be heard in Canada because Chevron has a Canadian subsidiary.

In February 2011, a judge in Ecuador issued an $18 billion judgment against Chevron in a lawsuit brought on behalf of 30,000 residents. The judgment was for environmental damage caused by Texaco during its operation of an oil consortium in the rainforest from 1972 to 1990. Chevron later bought Texaco.

Ecuador's highest court last year upheld the verdict but reduced the judgment to about $9.5 billion.

Chevron, which now has no assets in Ecuador, argues that a 1998 agreement Texaco signed with Ecuador after a US$40 million cleanup absolves it of liability. It claims Ecuador's state-run oil company is responsible for much of the pollution in the oil patch that Texaco quit more than two decades ago.

The Ecuadorean plaintiffs said the cleanup was a sham and didn't exempt third-party claims.

The lawyer for the Ecuadorians, Steve Donziger, has sought to have the judgment enforced in Canada, Brazil and Argentina. They have not pursued Chevron in the United States where a New York judge ruled in favour of Chevron's counter-suit that argued the judgment from the Ecuador courts was obtained fraudulently by corrupt means. That New York decision is now being appealed.

A year ago, the Ontario Court of Appeal overruled a lower court decision and concluded that Ontario is an "appropriate jurisdiction" to determine whether the Ecuadoran judgment should be enforced. Chevron is now looking for the country's top court to overturn the appeal court.

The international oil giant has argued that its Canadian subsidiary had nothing to do with the underlying lawsuit, and that allowing the action to proceed would violate a principle known as the "corporate veil," which says that subsidiaries are separate entities from their corporate parents and are not liable for actions of the parents. It noted the parent company has no assets in Ontario, and Chevron Canada Ltd. has very little business in the province.

However, Alan Lenczner, the Toronto-based lawyer representing the Ecuadorean villagers, expects the Supreme Court of Canada to rule in his client's favour. "I'm hopeful, more than hopeful," he said. "I believe that they will."