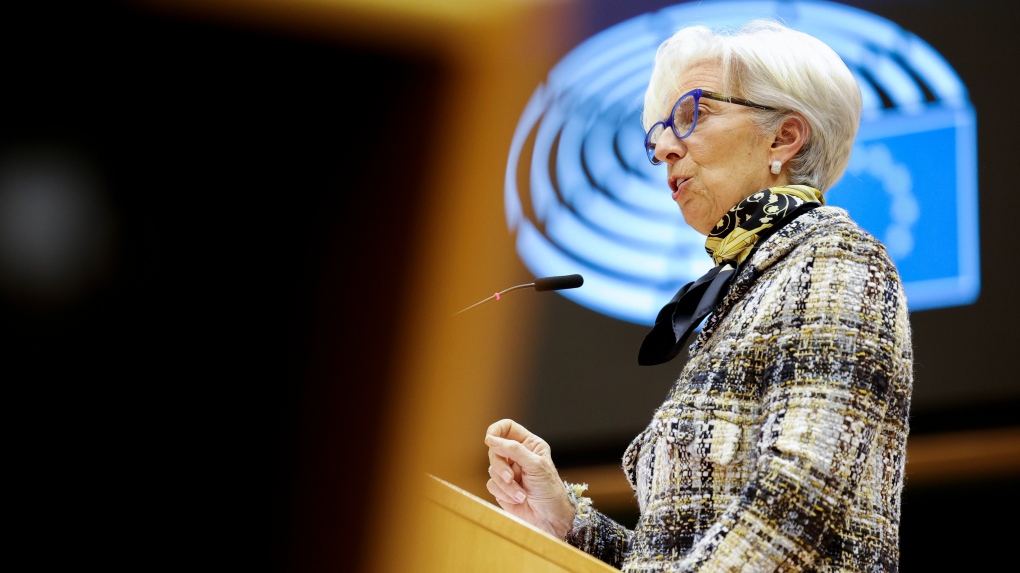 FRANKFURT -- European Central Bank head Christine Lagarde said the economy is still “on crutches” and in need of support from both the central bank and government spending as the 19 countries that use the euro limp through extended lockdowns in a third wave of the COVID-19 pandemic.

Lagarde said Thursday that the monetary authority for the eurozone sees an eventual rebound this year but did not discuss any reduction in its emergency stimulus because such a discussion would be “premature.”

While the ECB is encouraged by continued rollout of vaccines, “we still have this overall environment of uncertainty” about when infection numbers and restrictions on business activities and travel will ease," she said, citing concerns about the new, more contagious variants that have fueled recent increases in number of infections. “We still see near-term risks tilted to the downside.”

The economy is “on crutches, one fiscal crutch and one monetary crutch” and isn't ready to stand on its own power yet, she said.

Lagarde spoke at a news conference after the ECB left interest rate benchmarks untouched at record lows made no adjustments to its 1.85 trillion (2.22 trillion) bond purchase stimulus it says will run at least through March, 2022. Just under half of that amount remains to be used in coming months. The regular purchases using newly created money - a key power of central banks - drive down longer-term borrowing costs for companies, consumers and governments. Its key rate benchmark remains at minus 0.5%.

Lagarde again said that increased inflation this year, which is anticipated, would not lead the bank to tighten policy. She said the recent increase in inflation was due to “idiosyncratic and temporary factors” and that underlying inflationary pressures “remain subdued.”

The bank stands ready “to adjust all its instruments” if the situation calls for it, Lagarde said.

Longer term, risk are “more balanced” and progress in ramping up vaccination was “encouraging.” Europe's vaccine rollout has lagged that in the US and the UK.

Bank officials have stressed that any jump in inflation would be the result of one-time factors such as the withdrawal of pandemic tax breaks and comparisons with an earlier period of very low oil prices - and not a reason to withdraw any of its efforts to keep credit cheap for companies, governments and consumers. Inflation in the eurozone was an annual 1.3% in March. The bank's goal is close to but below 2%.

U.S. Federal Reserve Chair Jerome Powell has taken a similar view, saying that price increases later this could be due to temporary factors and that the Fed would not begin raising rates until the recovery in jobs in hiring was “effectively complete” and that inflation appears “on track to run moderately above 2% for some time.”

The eurozone economy shrank by 6.6% last year and economists say it may have contracted in the first quarter of this year as well. Output is not expected to reach pre-pandemic levels until mid-2022, lagging well behind other major pillars of the global economy.

The U.S. could reach pre-pandemic output as early as this month, according to a forecast this month from the Conference Board, while China was the only major economy to grow for the year in 2020. The U.S. rebound is being propelled by massive relief and stimulus spending by the federal government.

European governments have also spent heavily on pandemic relief but their 750-billion euro recovery fund at the EU level will only starting paying out for digital and green projects this year.

COVID-19 variant of interest vs. variant of concern: What does it mean?

How long does protection from COVID-19 vaccines last?

Ontario may have started to bend the COVID-19 curve, top doctor hints