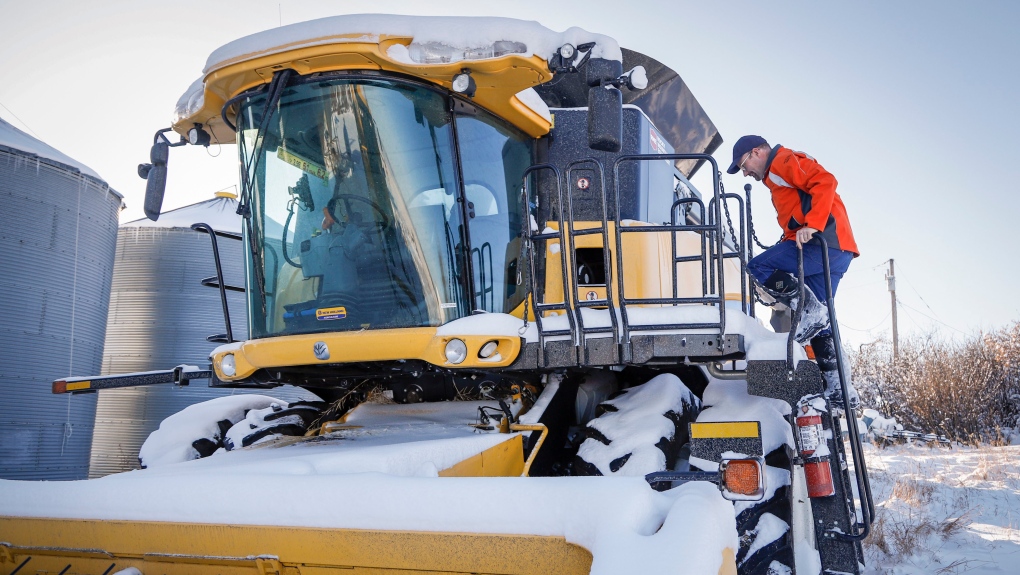 Farmer David Reid checks on his combine while his crops are buried under snow near Cremona, Alta., Wednesday, Nov. 6, 2019. (THE CANADIAN PRESS / Jeff McIntosh)

Winter's icy fingers have touched most of the Prairies since late September, causing havoc and frustration for many farmers trying to get crops off their fields.

Dave Reid, who farms near Cremona, northwest of Calgary, estimates 20 to 25 per cent of his canola is still in the ground under layers of snow. And it may have to stay there.

"With the snow we got the past couple of days, I'd say the chances of getting it before spring now are really slim."

The last time he left a crop in the field over the winter was in 1972, he said.

Losses this year will be difficult to swallow, since crop insurance doesn't kick in until harvest is actually completed.

"We're a mixed farm so we have hay as well, but we're still out several hundred thousand dollars of crops sitting in the field right now," Reid said.

It's not just the early winter that's the problem, he added. Most of his crops were well behind schedule because of a cool, wet summer and weren't ready to be harvested.

"With no break in the weather and winter now, it's just a perfect storm."

Hail over the summer destroyed most of the corn crop in the Taber area of southeastern Alberta. The early winter also finished the sugar beet harvest in the same region.

About 89 per cent of the crop in Alberta has been harvested compared with 95 per cent at this time last year. The province's weekly crop report says snow and cooler temperatures are "likely to bring harvest to a complete halt for the season."

Next door in Saskatchewan, about 90 per cent of this year's harvest is complete compared with the five-year average of 96 percent.

"It doesn't sound that bad. But in Saskatchewan, 10 per cent is about 3.5 to 4 million acres (1.4 million to 1.6 million hectares). Now that sounds a lot more scary when we say it that way," said crops specialist Cory Jacob with Saskatchewan Agriculture.

He said he's lost track of how many snowstorms have pelted the province so far this fall. It's a bitter pill for producers.

"They're frustrated. They want to get harvest off but they just can't," he said.

"If they give up, they get a bit of closure for the year and they can kind of move on. It's absolutely draining to try and keep going at it into November."

The situation in Manitoba is better, despite a severe storm that hit the southern part of the province just before the Thanksgiving weekend. Up to 50 centimetres of heavy, wet snow fell in some areas.

About 89 per cent of Manitoba's crop is off compared with an average 96 per cent, and farmers continue to harvest, said a Manitoba Agriculture spokeswoman.

"We have had fabulous weather, better than most producers ever expected after the snow had fallen. The resulting week after the snow was slow melting," said Anastasia Kubinec, manager of Crop Industry Development.

It's not unheard of in Manitoba for combines to be out in fields until the end of November, she said. The storm was just a minor delay.

"It really is a miracle. It's much better than many producers ever could have imagined or hoped for."

This report by The Canadian Press was first published Nov. 10, 2019