Dispute at Gateway hearings over need for more pipeline capacity 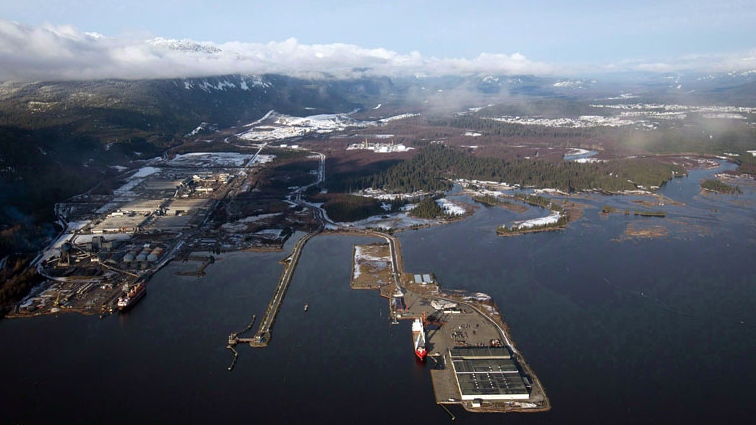 Douglas Channel, the proposed termination point for an oil pipeline in the Enbridge Northern Gateway Project, is pictured in an aerial view in Kitimat, B.C. (Darryl Dyck/THE CANADIAN PRESS)

Lawyers for oilsands developers and the Canadian Association of Petroleum Producers told hearings on Enbridge Inc.'s (TSX:ENB) proposed $6-billion Northern Gateway pipeline that conservation groups are understating the volume of bitumen the province will produce and overstating the existing pipeline network's ability to move product.

Keith Bergner, representing the producers, said oilsands production is already on pace to exceed projections in reports submitted by the Pembina Institute and ForestEthics.

"So pipeline capacity would be required earlier than you've assumed?" he asked Nathan Lemphers of the Pembina Institute.

"There would be shut-in possibility at an earlier date," Lemphers acknowledged.

Bergner also told the National Energy Board hearings Tuesday that although Pembina's projections assumed current pipelines would run at capacity, that rarely happens.

Pipelines are shut down for maintenance or for pressure restrictions, he said. As well, capacity in Canadian lines is often restricted by bottlenecks in the U.S. lines they feed into.

Bergner also said production from the U.S. Bakken field, which uses Calgary-based Enbridge's main line, is expected to expand by almost 25 per cent.

The petroleum producers association has forecast that additional pipeline capacity will be required in Western Canada within two years.

Don Davies, representing four companies hoping to move bitumen through the proposed line, disputed suggestions in Lemphers's report that Enbridge has failed to prove the need for the pipeline because it hasn't obtained binding agreements with shippers.

"It's not unprecedented for an export pipeline to be approved without long-term agreements," he told Lemphers. "If you'd done appropriate research you could agree with me."

The Northern Gateway line would move about 525,000 barrels of bitumen a day. It would provide the first link between Alberta's oilsands producers and Asian markets through a port at Kitimat, B.C.

The hearings are scheduled to last the rest of the week. They then move to Prince Rupert and Prince George in British Columbia.