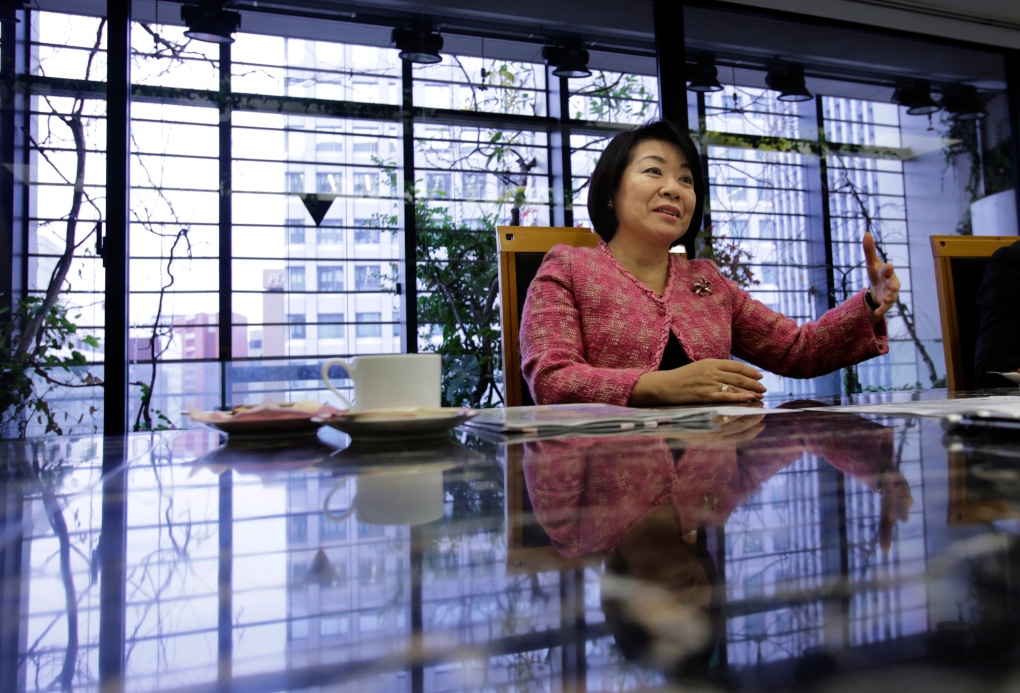 Tamai is eager to do so, nearly two years after her first child was born, but so far the 35-year-old former national government employee has only been able to find an internship.

Abe, who took office a year ago, has made the advancement of women a pillar of his economic revival policies in the most aggressive and ambitious initiative to back the rise of Japanese women in years. Tamai's struggles show why doubts remain about whether it's enough to overcome entrenched discrimination in the workplace.

"It is a bunch of flag-waving," said Tamai, who holds a doctorate in literature from Nihon University. "I don't see how he has the vision to realize the goal of helping us, those people struggling to raise a child, working and doing housework."

The government is beefing up child care. It is encouraging companies to grant three years of maternity leave, or flexible hours during that period. It is also asking publicly held companies to promote women to leadership positions so they hold 30 per cent of such posts by 2020.

Although women make up 40 per cent of Japan's workers, they face discrimination in hiring, promotion and pay. On average, a Japanese woman makes 70 per cent of a man's wage for equal work, according to government data.

The government also says women held just 12 per cent of private-sector managerial jobs in 2012 and fared even worse at higher levels, making up only 5 per cent of section chiefs. Some critics and women workers say they tend to be confined to second-class status, not taken seriously for what is considered "a man's job."

They are underrepresented in government as well, comprising 11 per cent of the more powerful lower house of parliament, 18 per cent of the upper house, and just 2.5 per cent of managerial positions among public servants.

Japan has a less fluid workforce than many Western countries, because employees tend to stay loyal to one company for life. That puts women at a disadvantage because they tend to take time off to have children and are then consigned to lower-rung jobs, analysts say. Sixty per cent of working women quit after their first child is born.

The Geneva-based World Economic Forum ranked Japan 105th in this year's Global Gender Gap Report, which measures economic equality and political participation. Iceland was No. 1, followed by the Scandinavian nations. Germany was 14th and the U.S. 23rd.

Women make up 3.9 per cent of board members of listed Japanese companies, versus 12 per cent in the U.S. and 18 per cent in France, according to the Organization for Economic Cooperation and Development.

"Most major companies are not serious about utilizing the talent of women," said Junko Fukasawa, a senior managing director at Tokyo job-referral company Pasona Group, which is unusual in having three women on its 11-member board. "They are very male-dominated."

When Fukasawa meets people from other companies, they often turn first to her male underlings to exchange business cards, and are surprised to learn later that she is the boss. People on the phone have demanded to speak with a man, and she has had to tell them she is in charge, she said.

Under Fukasawa's leadership at human resources, Pasona has set up counselling for women executives and mentor programs. Male employees are encouraged to take paternity leave, dubbed a "hello baby vacation." Pasona has been deluged with queries from other companies trying to tackle Abe's initiative, and turned the counselling on such requests into a new business.

One factor that may help women is demographics.

Japan's birth rate is so low that the world's third-largest economy is running out of workers. Kathy Matsui, an analyst at Goldman Sachs Japan who invented the term "womenomics" to describe how working women can lift an economy, projects Japan's workforce would expand by 8.2 million people if the gender gap were closed, boosting gross domestic product by up to 15 per cent.

During a recent trip to Tokyo, U.S. Vice-President Joe Biden visited DeNA, a video-game and e-commerce company founded by a woman, to drive home Abe's message of promoting women.

But no major company has responded with a high-profile female posting, even as the first female chief executive at General Motors makes headlines in the U.S. No Japanese company is among the 23 Fortune 500 companies run by women.

Kaoru Sunada, a workplace expert at Ochanomizu University in Tokyo, said some internships and affirmative action programs are only for show. He said women are sometimes let go as soon as the programs are completed, and that the problem of highly educated but jobless females is growing.

Emi Shitara, a graduate of a top women's university who speaks six languages, applied to 50 places while in college and didn't land a single job. Her main luck has been with temporary work for foreign employers such as the UN and the Harvard Kennedy School. Now 33, she is considering graduate school in the U.S.

"Women are dropping out because they are disillusioned," she said. "If Japan can create new kinds of jobs, for young people and for women, then people will be happy to work."

The fight toward equality has been tough for Japanese women.

The right to vote came only in 1945, more than two decades after their American sisters. A law to protect gender equality in employment passed only in 1985, and it has been criticized as largely toothless. Japan is not a litigation-prone culture, and damage lawsuits rarely result in lucrative victories, meaning that high-profile lawsuits alleging gender bias are rare.

Some companies are reluctant to invest in women employees because they worry they will leave, said Katsura Tottori, a senior operating officer who oversees diversity at Otsuka Pharmaceutical Co.

Nearly 30 years ago, Tottori took only six weeks off after her first child, and eight weeks after her second. These days, Otsuka allows 18 months of maternity leave.

Even with such changes, the biggest challenge lies in changing the thinking of family members, said Tottori. Cultural stereotyping favours the docile female who dotes upon men, raises the children and does all the cooking and cleaning.

Kumiko Nemoto, associate professor of sociology at Western Kentucky University, is studying the attitudes toward working women at several major Japanese companies. She said gender equality would be more attainable if companies received financial incentives for achieving it, and penalties for discrimination.

Even women prefer male bosses, Nemoto said. She said they have grown accustomed to "eroticizing" their career paths, playing a feminine role with higher-ups to get ahead.

"The culture of the housewife is dominant," she said. "Women's ambitions are shaped by their limited opportunities."