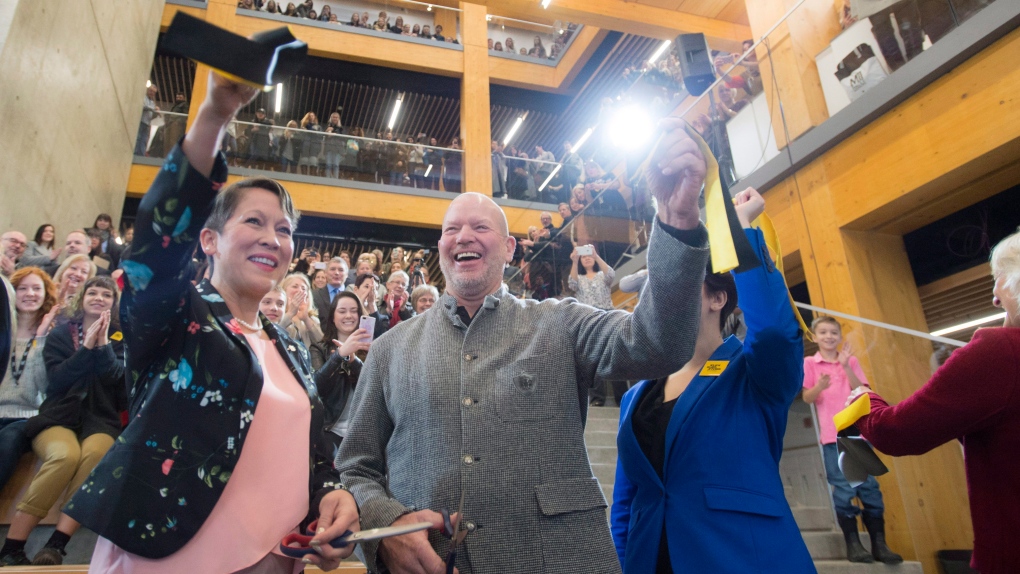 Chip Wilson, right, and Advanced Education Minister Melanie Mark hold up a ribbon they had just cut to open the Wilson School of Design at Kwantlen Polytechnic University in Richmond, B.C. on Wednesday, Jan. 3, 2018. (THE CANADIAN PRESS/Jonathan Hayward)

The Wilson School of Design, named in honour of project donor Chip Wilson and his wife Shannon, will add 140 full-time seats at the university, bringing the number of design spaces to almost 700.

In opening the facility Wednesday, Minister of Advanced Education Melanie Mark, says the facility will drive students' budding design, creative and business goals to the next level.

In addition to expanded study and design areas, the $36-million, high-tech space includes innovative teaching studios and labs, a testing centre and advanced technology such as laser cutters, 3D printers and ultrasonic welders.

The facility will provide space for existing design programs, such as the bachelor of design in fashion and technology, bachelor of interior design, and continuing and professional education.

The building will also house the university's product design and technical apparel design programs, which educate students in the development of performance, technical, medical and protective wear.

"Design careers are vital for a 21st-century diversified economy," Mark says in a news release.

"Cultivating design talent in British Columbia will support the apparel sector, which is poised for strong growth," she says.

Chip Wilson, whose company reported a third-quarter profit of $58.9 million in December, credit's B.C.'s environment for driving an unparalleled demand for technical apparel.

"The province is home to world-class technical apparel companies, and we now have a state-of-the-art facility and training programs to supply the technical demand," he says in the release.