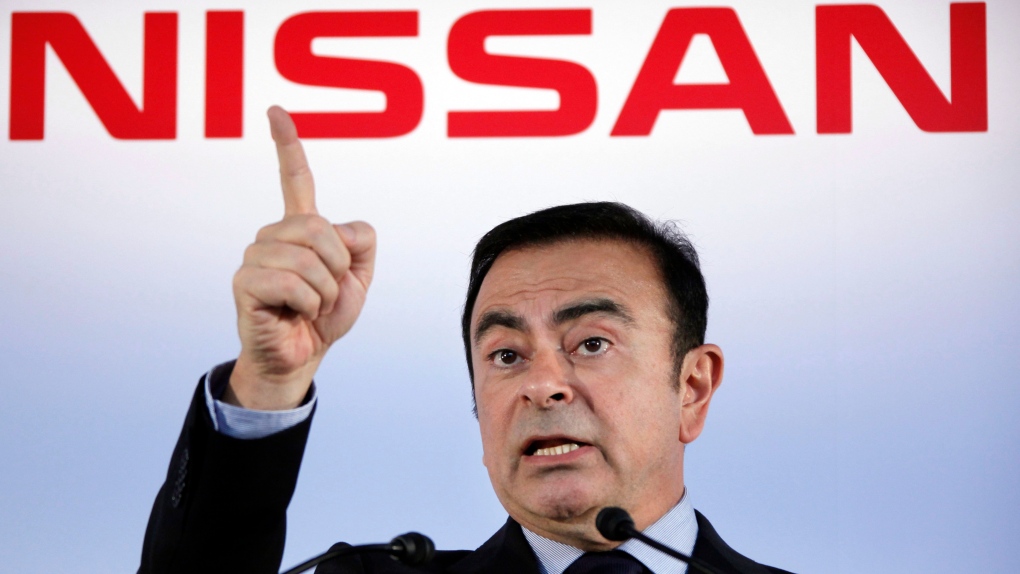 In this May 11, 2012, file photo, then Nissan Motor Co. President and CEO Carlos Ghosn speak during a press conference in Yokohama, near Tokyo. (AP Photo/Koji Sasahara, File)
TOKYO -

The defence for former Nissan executive Greg Kelly said Wednesday there was no evidence or motives linking him to alleged under-reporting of his ex-boss Carlos Ghosn's compensation.

Kelly's chief defence lawyer, Yoichi Kitamura, said in wrapping up the defence's arguments that Kelly is innocent and he had no knowledge of the complex calculations over Ghosn's unpaid remuneration, tabulated and updated by Nissan Motor Co. secretariat official Toshiaki Ohnuma.

Kitamura told the Tokyo District Court prosecutors had presented no evidence of exchanges about Ghosn's compensation between Kelly and Ohnuma.

"Kelly was not involved at all," Kitamura said.

Kelly, who sat quietly with the defence lawyers wearing his usual red tie and dark suit, pleaded innocent at the opening of the trial a year ago. In closing remarks, he reiterated he had been just trying to find legal ways to pay Ghosn after retirement.

"I was not involved in a criminal conspiracy, and I am not guilty of any crime," Kelly said, standing before the panel of three judges at the end of the session.

Reading from a statement, he said he always consulted Nissan lawyers to make sure all efforts to retain Ghosn were legal and acted in the company's best interests.

"I believe that the court will reach the same conclusion as the defence after a fair review of the relevant evidence in this case," he said.

Earlier in the daylong session, Kitamura, known for winning acquittals in a nation with a conviction rate higher than 99%, argued there was "no motive at all for Kelly to carry out such an illegal act."

"Greg Kelly is a lawyer. Even if he had wanted to prevent Carlos Ghosn from leaving, would he have committed a crime?" said Kitamura.

Kelly, an American, was in semi-retirement in the U.S. when Nissan lured him back to Japan, on the pretext of attending a meeting. He was arrested in November 2018, at the same time as Ghosn. But Ghosn jumped bail and fled to Lebanon in late 2019. Lebanon does not have an extradition treaty with Japan.

At the centre of the case is a 1 billion yen (US$9 million) a year pay cut Ghosn voluntarily took, starting in 2009, when disclosure of big executive salaries became legally required in Japan. Ghosn was worried about a public backlash as hefty executive pay packages are not common in Japan.

Prosecutors say that money, totalling about 9 billion yen ($80 million) should have been reported as compensation even though it was never paid or stipulated in a formal contract.

In wrapping up their arguments last month, prosecutors demanded two years in prison for Kelly. A verdict is not expected until March.

Critics of Japan's judicial system have blasted the cases against Ghosn and Kelly as "hostage justice."

Ghosn told The Associated Press in a recent interview he believes there was a conspiracy, concocted by officials at Nissan who feared greater control by French alliance partner Renault.

"Greg is paying the price of his honesty and his being straightforward," Ghosn said of Kelly. "He is the only person who isn't lying in the process."

After Wednesday's session, Kelly told reporters he had not spoken with Ghosn, but he loved Nissan and he wasn't going to worry about the verdict.

"The No. 1 responsibility of an embassy and an ambassador is to make sure the safety, and ensure the safety, of a U.S. citizen on foreign soil," he said in response to a question from Republic Sen. Bill Hagerty of Tennessee, the state where Kelly lived before his arrest.

"You have my word," Emanuel said.

Hagerty, ambassador to Japan until mid-2019, said Kelly's human rights were violated, and his name should be cleared.

Nissan, the automaker behind the Leaf electric car and Infiniti luxury models, did not fight charges in the same trial as a corporate entity.