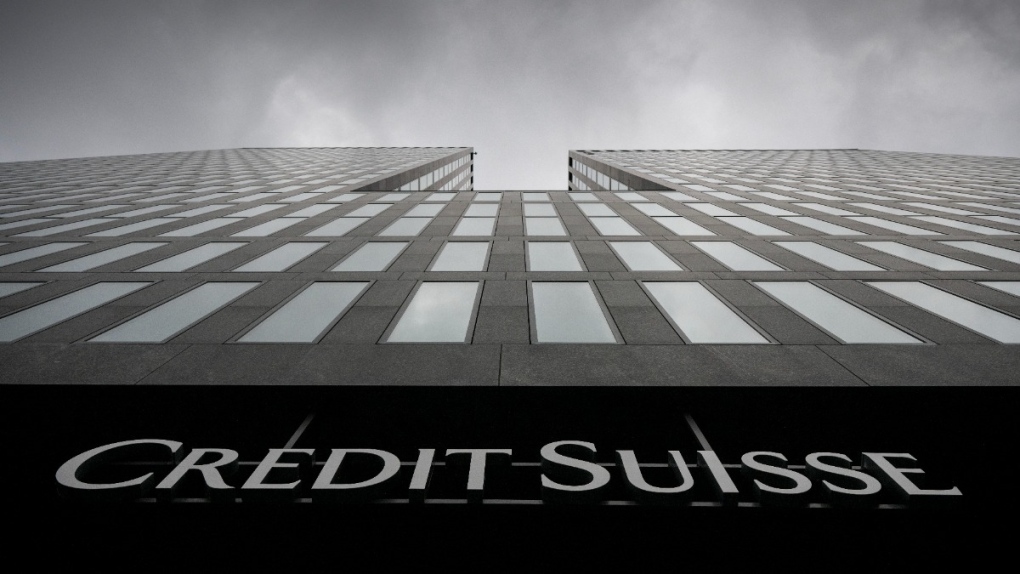 A building of the Credit Suisse bank in Zurich, Switzerland, on Feb. 21, 2022. (Ennio Leanza / Keystone via AP)

Social media speculation that Credit Suisse was on the brink of collapse sent shares of the Swiss bank on a wild ride in recent days, as investors traded off the frenzy and bought up protection in case of a default.

But the hand-wringing over the global lender's fortunes appears to say more about the anxious mood hanging over markets than the bank's financial position.

Analysts say that Credit Suisse has more than enough capital on hand to meet regulatory requirements and the liquidity necessary to deal with a potential shock. Years of scandals and fines have hurt the bank's business, but it's not about to fail.

"From our perspective, looking at company financials at the end of [the second quarter], we see [Credit Suisse's] capital and liquidity position as healthy," JPMorgan Chase analyst Kian Abouhossein wrote on Monday.

That doesn't mean there aren't risks. The Financial Times reported that senior executives at Credit Suisse spent the weekend calling clients and large counterparties, assuring them that the bank is on solid footing. If customers start to pull their money, that could create a dangerous feedback loop.

The timing is also tricky. Credit Suisse needs to raise new funds from investors to support a turnaround plan to be announced later this month, which will include paring back its struggling investment bank.

However, a number of experts maintain that the spectacle surrounding Credit Suisse looks overdone, at least based on what we know now.

"I do not think this is a 'Lehman moment,'" Mohamed El-Erian, an adviser to Allianz, said on CNBC on Monday, referring to the 2008 collapse of Lehman Brothers that sparked a wave of market panic during the global financial crisis.

Credit Suisse, which is the second-biggest bank in Switzerland, has been plagued by a series of missteps and compliance failures in recent years that cost it billions and led to an overhaul of top management.

Yet it's come under renewed scrutiny following a memo to employees from CEO Ulrich Körner sent Friday, which sought to allay any concerns about the bank's financial health before a restructuring plan is unveiled on October 27. The letter backfired, fuelling apprehension about the bank instead of tamping it down.

Shares of Credit Suisse dropped nearly 12% at one point on Monday, hitting a record low as investors ditched their holdings. Sentiment appears to be improving, with shares finishing down just 0.9% on Monday and rising on Tuesday. Still, traders have raced to buy insurance in case the bank defaults on its debt, sending five-year credit default swaps surging.

Credit Suisse's business is under serious strain. It's preparing to shrink its investment bank and beef up its wealth management arm — an expensive endeavor that could cost 6 billion Swiss francs (US$6.1 billion), according to a recent analysis from Keefe, Bruyette & Woods. Asset sales would likely cover just 2 billion Swiss francs.

The market value of the bank is down to 10.5 billion Swiss francs, following a 54% decline in the share price so far this year.

Körner's note Friday acknowledged that it's "a critical moment for the whole organization." However, analysts emphasize that there's no indication the bank faces a more existential threat, even if coming up with the funding to execute an effective restructuring could prove challenging.

"We would be wary of drawing parallels with banks in 2008," analysts at Citigroup said in a note to clients on Monday.

At the end of the second quarter, a key measure of Credit Suisse's capital position — which is tied to its ability to absorb losses — stood at 13.5%, higher than peers, according to Citi. The bank also has "very healthy" levels of cash that can be quickly accessed in a crunch.

THE NEXT BIG RISK?

Concerns about Credit Suisse were amplified by a sudden crisis in U.K. bond markets late last month. Investors were taken by surprise after Prime Minister Liz Truss' new government unveiled a package of unfunded tax cuts. That sparked a frenetic sell-off of government debt, backing pension funds into a corner and forcing the Bank of England to intervene to ensure financial stability.

The episode exacerbated fears that cracks in the financial system could become exposed as an aggressive campaign of interest rate hikes by central banks aimed at fighting inflation fans market volatility.

"It is the market reaction that's the interesting thing here," El-Erian said Monday of the Credit Suisse drama.

The bank could be exposed to risks that the market or even insiders don't know about, said José-Luis Peydró, a professor of finance at Imperial College Business School.

Yet if Credit Suisse were to run into deeper trouble, many issues would be unique to the company, which means they probably wouldn't spark a chain reaction across the banking sector, Peydró added.

Large banks also face much more significant scrutiny after the 2008 meltdown, which makes them less vulnerable.

"Banks have much, much higher levels of capital and liquidity than in the past thanks to the post-2008 banking regulation," Peydró said.

Other lenders aren't subject to these requirements, however. In recent days, experts have said they're keeping an eye on so-called "shadow banks," which make loans but don't have to follow the same strict regulatory rules. They think these firms could be a source of turmoil if markets are hit with fresh shocks.

"If you're worried about systemic risk, look at the non-banks, not the banks," El-Erian said.