CP lays out timeline for KCS merger; shareholders to vote in December 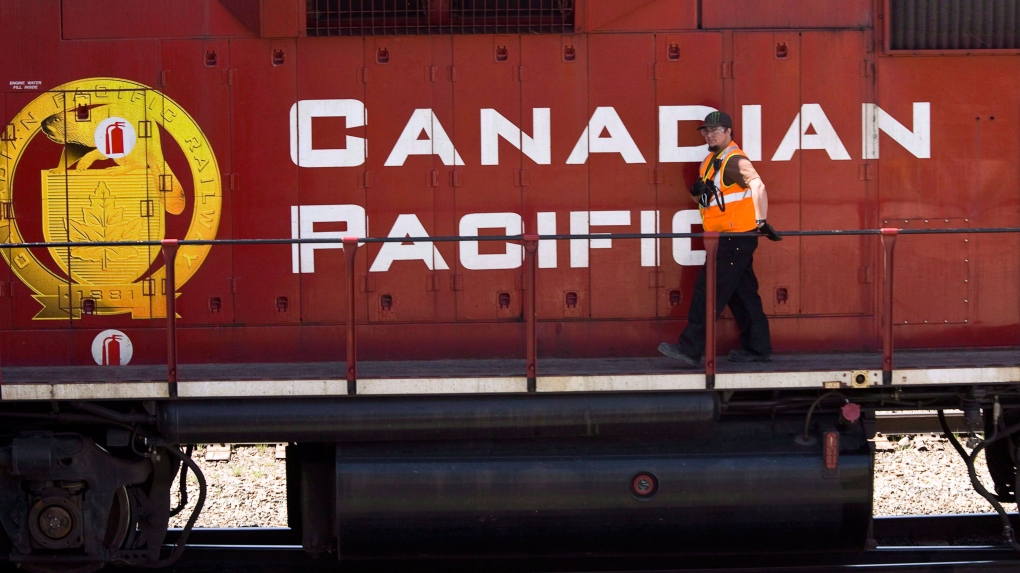 A Canadian Pacific Railway employee walks along the side of a locomotive in a marshalling yard in Calgary, Wednesday, May 16, 2012.
CALGARY -

Canadian Pacific Railway Ltd.'s acquisition of Kansas City Southern could be complete by next fall, the Calgary-based railway said Thursday.

"That's what best case looks like, and that's what we're going to work our tails off to be able to achieve," CP chief executive Keith Creel told analysts in a conference call, adding CP plans to submit its merger application to the U.S. Surface Transportation Board next month. The review process could take 10 months or more, Creel said.

"We know it's going to be a robust review. We anticipate that. We're going to work in support of that," he said. "But we hope that and believe that it can be concluded in a reasonable time frame and bring us to a pro forma company by October, November of 2022."

CP Rail announced Wednesday it has reached a deal to acquire KCS for approximately US$31 billion including debt. The announcement came the same day Canadian National Railway Co. said it is dropping its rival takeover bid for KCS.

CP and KCS will hold shareholder votes in December, Creel said. The merger, which CP says will create the first Canada-U.S.-Mexico rail network, also needs to be approved by Mexican regulators.

CP already has approval to use a voting trust to complete the merger that will allow shareholders to be paid for their shares before the full regulatory review of the takeover is complete.

CP Rail has said customers will not experience a reduction in railroad choice as a result of the transaction and has pledged to keeping all existing freight rail gateways open on "commercially reasonable terms."

Jeff Windau, an analyst with Edward Jones, said the fact that a combined CP and KCS would still be the smallest Class 1 railroad in North America works in the merger's favour.

"With any acquisition or merger there are always risks going into any regulatory review process," Windau said in an interview. "But I would say out of all the potential Class 1 rails, this one probably has the highest probability of working its way through the regulatory process. There are fewer hurdles to this one."

While the new railway will remain the smallest of six large railways operating in the U.S. by revenue, it would operate nearly 33,000 kilometres of rail, employ nearly 20,000 people and generate about US$8.7 billion in annual revenues.

Windau said the benefit of the merger is that it will reduce the number of interchanges and transfers between rail lines.

"There is potentially the ability to connect the various entities better. For example, the automakers down in Mexico to Detroit and to Canadian automakers," he said. "Those connections exist today, it just takes going through more hoops to get there."

"We know that the markets that this combined network connects are very large .... and the creation of new single-line service is going to be very attractive to our customers," Ottensmeyer said.

Calgary Economic Development has been closely watching the battle for KCS, said the organization's interim president and chief executive Brad Parry, and is pleased that CP has come out on top. He said the economic development group has identified transportation and logistics as a potential area of growth for the city as Calgary works to diversify its oil and gas-dominated economy.

"When we think of Calgary as this (rail) centrepoint, where you can go north-south and east-west from anywhere in North America -- it's huge for us," Parry said. Having them (CP and KCS) here really helps us with that."

CP Rail's offer, which includes the assumption of US$3.8 billion of outstanding KCS debt, values KCS at US$300 per share. Following the closing into a voting trust, common shareholders of KCS will receive 2.884 CP Rail shares and US$90 in cash for each KCS common share held. Preferred shareholders will receive US$37.50 in cash for each KCS preferred share held.

CP Rail said the deal will be accretive to its earnings in the first year. To fund the stock consideration of the merger, it will issue 262 million new shares. The cash portion will be funded through a combination of cash-on-hand and debt.

To fund the stock consideration of the merger, it will issue 262 million new shares. The cash portion will be funded through a combination of cash-on-hand and about US$8.5 billion in debt. The total outstanding debt will be about US$20 billion following closing into a trust.

Montreal-based CN was dealt a setback last month when the U.S. Surface Transportation Board denied the company's use of a voting trust for its own bid for KCS, saying it would be bad for competition.

KCS shareholders would own 28 per cent of CP's common shares after its own trust is expected to close in the first quarter of 2022.

Under its agreement with KCS, CN said the U.S. railway will pay a US$700-million company termination fee as well as US$700 million that CN paid when KCS broke its initial deal with CP Rail to accept CN's offer.

CN has said it continues to believe that a combination with KCS would have enhanced competition and delivered many other compelling benefits for stakeholders. It has vowed to participate in the review of the CP-KCS combination to ensure that "all regulatory rules are enforced fairly, and customers do not suffer anticompetitive effects."

In a note to clients, National Bank analyst Cameron Doerksen said he is bullish on the long-term prospects of a merger between CP and KCS, but cautioned that a degree of uncertainty during the merger review period could put a "cap on the upside for CP shares."

This report by The Canadian Press was first published Sept. 16, 2021