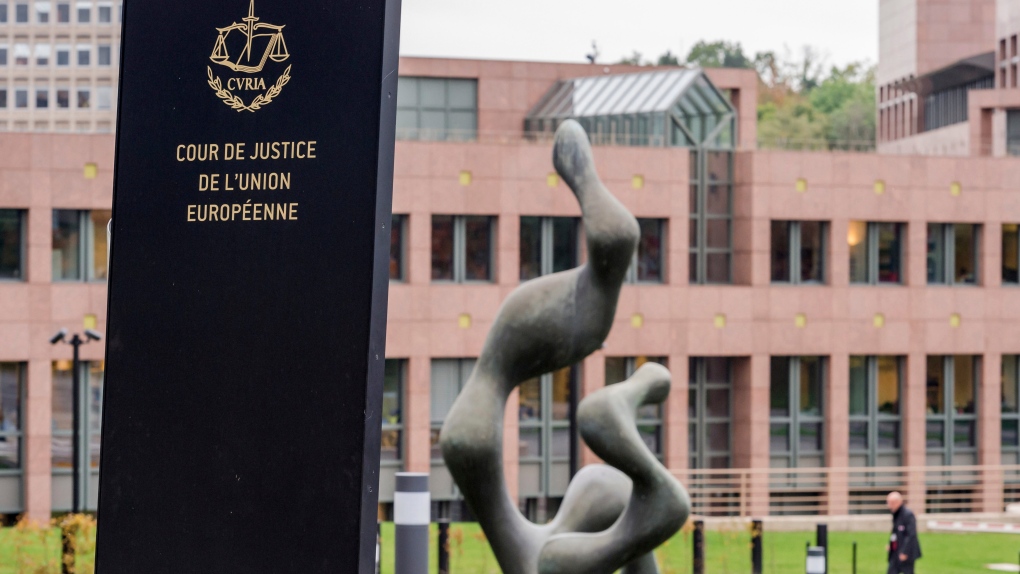 FILE - In this Oct. 5, 2015 file photo, a man walks by the European Court of Justice in Luxembourg. (AP Photo/Geert Vanden Wijngaert, FILE)

BRUSSELS -- The European Union's top court ruled Tuesday that EU countries must identify products made in Israeli settlements on their labels, in a decision that was welcomed by rights groups but sparked anger in Israel.

The European Court of Justice said that when products come from an Israeli settlement, their labels must provide an "indication of that provenance" so that consumers can make "informed choices" when they shop.

The EU rejects Israeli settlement expansion, saying it undermines the hopes for a two-state solution by gobbling up lands claimed by the Palestinians. Israel says the labeling is unfair and discriminatory and says other countries involved in disputes over land are not similarly sanctioned.

The volume of settlement goods coming into Europe, including olive oil, fruit and wine but also industrial products, is relatively small compared to the political significance of the court ruling. It is estimated to affect about 1% of imports from Israel, which amount to about 15 billion euros ($16.5 billion) a year.

The EU wants any produce made in the settlements to be easily identifiable to shoppers and insists that it must not carry the generic "Made in Israel" tag.

Israel captured the West Bank and east Jerusalem in the 1967 Mideast war and began settling both areas shortly afterward. The Palestinians claim both areas as parts of a future state, a position that has global support.

The international community opposes settlement construction and many countries consider them illegal. Their continued growth is seen to undermine the establishment of an independent Palestine alongside Israel. Today, nearly 700,000 Israelis live in the two areas, almost 10% of the country's Jewish population.

The ECJ underlined that settlements "give concrete expression to a policy of population transfer conducted by that State outside its territory, in violation of the rules of general international humanitarian law."

It said any failure to identify the point of origin of produce meant that "consumers have no way of knowing, in the absence of any information capable of enlightening them in that respect, that a foodstuff comes from a locality or a set of localities constituting a settlement established in one of those territories in breach of the rules of international humanitarian law."

It's not entirely clear, however, how the ruling will be enforced because the real origin of the produce is not always easy to identify, experts say.

The European Commission said it's up to individual EU countries to ensure that labels are correct, but that the origin of settlement produce must be made known in a way that is "not misleading to the consumer."

Human Rights Watch welcomed the ruling. The rights watchdog's EU Director, Lotte Leicht, said it's "an important step toward EU member states upholding their duty not to participate in the fiction that illegal settlements are part of Israel."

Oxfam's director in the Palestinian territories, Shane Stevenson, said settlements "are violating the rights and freedoms of Palestinians" and that "consumers have a right to know the origin of the products they purchase, and the impact these purchases have on people's lives."

Israel's Foreign Ministry rejected the ruling, saying it set a "double standard" that unfairly singles out Israel when there are dozens of territorial disputes worldwide.

"The European Court of Justice's ruling is unacceptable both morally and in principle," said Foreign Minister Israel Katz. "I intend to work with European foreign ministers to prevent the implementation of this gravely flawed policy."

The head of the local settler council, Israel Ganz, said the ruling is part of "a double standard that discriminates against Jews living and working in their homeland of thousands of years. This decision will directly hurt the Arab population working at these factories, and manufacturing these products."

Ganz said he did not expect sales to be hurt as settlement products are of "high standards."

Hanan Ashrawi, a senior Palestinian official, welcomed the ruling as a "first step" and encouraged Europe to ban settlement products altogether. "If they do not allow these illegal products to enter European soil, then that would really serve the cause of justice," she said.

The case came to court after an Israeli winery based in a settlement near Jerusalem contested France's application of a previous ECJ court ruling on the labeling. That ruling backed the use of origin-identifying tags but did not make them legally binding.

The winery's CEO, Yaakov Berg, said he was studying the decision with his lawyers and declined to comment further.

EU Commission Spokeswoman Mina Andreeva noted that Israel has a special trading relationship with the EU, with products originating in its internationally recognized borders benefiting from preferential tariff treatment.

"This situation will remain unchanged," she said. "The EU does not support any form of boycott or sanctions against Israel."

How to do business in or with the Israeli settlements has been a tricky issue for companies before. Airbnb stopped listings there last year, before reversing its decision .