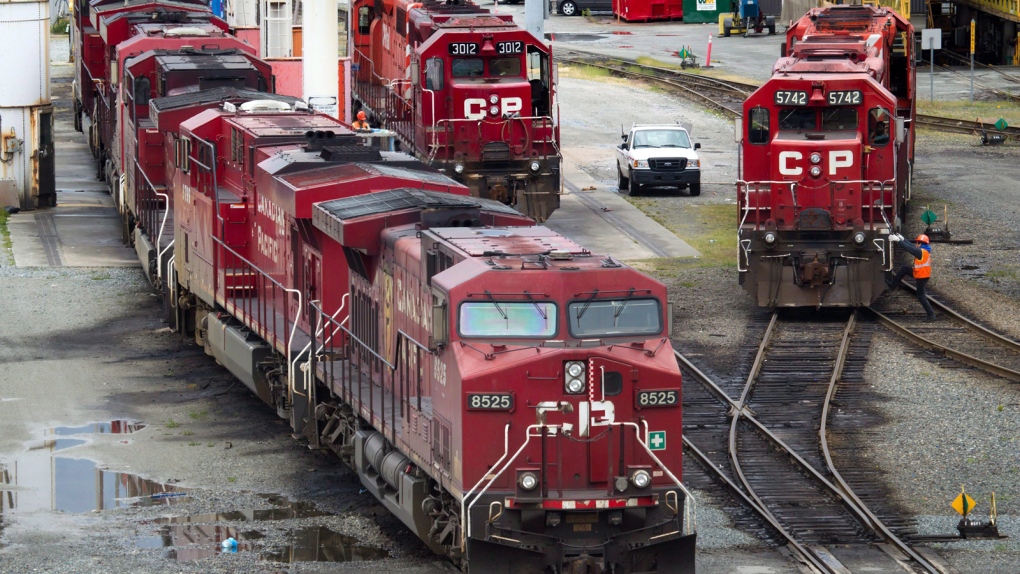 A Canadian Pacific Rail maintenance worker climbs onto a locomotive east of Vancouver, B.C., on Wednesday, May 23, 2012. (Darryl Dyck / THE CANADIAN PRESS)

MONTREAL -- Canadian Pacific Railway has welcomed a court ruling limiting its liability from lawsuits triggered by the transporting of dangerous goods, which could help the company in legal action related to the deadly Lac-Megantic disaster.

The Federal Court of Appeal ruled last month that a tariff demanded by CP (TSX:CP) from shipping companies regarding the movement of toxic or poisonous inhalants such as liquefied and compressed gas is reasonable and legal.

CP's tariff states the company cannot be held liable for any claims, including death or environmental damage caused during the transportation of hazardous, toxic inhalants, unless it is found to be solely negligent or guilty of wilful misconduct.

The ruling means CP is justified in demanding shippers indemnify the company if a derailment occurs after it hands off trains to another railroad to continue hauling toxic goods to their final destination.

"CP applauds the court of appeal ruling in this case and the finding CP's tariff was both legal and not unreasonable," Jeremy Berry, a spokesman for the railroad, said in an email.

"The court unanimously recognized that different commodities present different level of risks and that railways have a legitimate interest in limiting exposure transporting certain kinds of goods under tariff."

Only dangerous goods classified as toxic or poisonous inhalants are discussed in the ruling, but lawyers in the case said the decision could be interpreted more broadly to allow CP to limit its liability in the transportation of crude oil.

The railway is facing two upcoming lawsuits connected to the Lac-Megantic disaster, which occurred after a train transporting crude oil derailed in the town in 2013, exploded and killed 47 people.

CP maintains it had no responsibility for the disaster because it occurred after it handed off the train -- which was owned and operated by Montreal Maine and Atlantic Railroad -- for the final leg of the journey to New Brunswick.

Victims and creditors have launched a class-action lawsuit against CP, claiming the railroad was negligent. The Quebec government has also initiated a $400-million claim against the railway company.

None of the claims in the two lawsuits have been tested in court.

CP says it cannot be held responsible for the Lac-Megantic disaster because the crash involved an MMA train operated by MMA employees on MMA's rail network.

The problem for CP is that MMA filed for bankruptcy because it didn't have enough insurance to pay damages to victims and creditors. During the bankruptcy proceedings, roughly 25 companies accused of responsibility in the crash agreed to pay money into a settlement fund and in return receive legal immunity from future lawsuits.

CP refused to pay into the fund and is therefore the only solvent company left to be sued.

Ian MacKay, a lawyer for an intervener in the Federal Court of Appeal case, said the December ruling could be used by CP to help bolster its case in the upcoming court proceedings.

"In theory, there may be other CP liability tariffs they may have wanted (the ruling) to rely on, so that's why they were arguing in my case so strongly, and maybe what they had in mind ... was to transfer liability from themselves to others (for crude oil)."

During the MMA bankruptcy proceedings, one of CP's lawyers discussed how at least one company that owned the crude oil that caused the Lac-Megantic explosions agreed to a tariff limiting CP's responsibility in the advent of damages caused by the product.

That company, however, has since received legal immunity.

The December appeal stemmed from a 2012 complaint lodged by shipping companies to the Canadian Transportation Agency.

Shippers of toxic inhalants argued CP was attempting to avoid its legal obligations by limiting its liability through the rail tariff, known as Item 54.

The agency ruled in the shippers' favour in 2013, a decision the Federal Court of Appeal overturned.