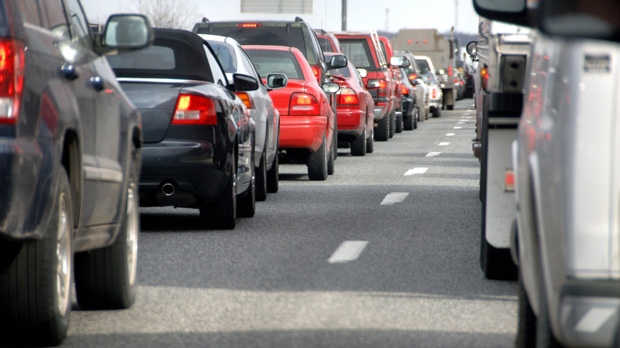 TORONTO, Ontario -- A new survey says many Canadians consider the time it takes to get to work as important as the job itself.

The survey by Oxford Properties and Environics Research Group found that 76 per cent of respondents wanted a reasonable commute to the office.

All things being equal, 50 per cent considered commute time to be the No. 1 factor in choosing one employer over another.

The majority of those surveyed said a commute time of less than 30 minutes was the appropriate travel time to work, in line with the average one-way Canadian commute of 29 minutes.

But that commuting time applies to only six in 10 Ontario workers, with commuters in Toronto facing an average one-way trip of 42 minutes.

Atlantic Canada commuters fare better, with nine in 10 workers commuting 30 minutes or less, as do workers in Edmonton, Calgary and Ottawa.

While some Canadians may change jobs for a shorter distance to work, one-third of workers would be willing to work an extra three hours per week for a reasonable commute, the survey said.

Twenty-eight per cent would also work longer to be within walking or biking distance of home.

Meanwhile, once at the office, the survey found that Canadians want a space that allows them to work collaboratively with other employees, is close to shops and other amenities and is energy-efficient.

So-called generation Y is most in favour of spaces that promote engagement between all workers, with 22 per cent of those under 35 saying they prefer to work in a flexible work destination with collaborative areas. That compared with only 12 per cent of workers aged 50 to 64 years.

Such demands may seem lofty at a time when many university graduates are finding it hard to land a job, but Andrew McAllan of Oxford Properties said that when it comes to skilled and specialized workers, companies are willing to do whatever it takes to attract and retain talent.

In the past, "you went to work with the employer that you wanted to work with, without regard for where their offices were, and if their offices were somewhere other than where you lived, you either commuted or you moved," said McAllan, senior vice-president and managing director of real estate with Oxford Properties, a real estate investment, development and management firm.

"We've seen a continuing evolution coinciding with the rise of the knowledge worker."

The shift, he said, is also generational.

He himself has commuted from Oakville, Ont., to Toronto every day for 30 years, a trek that takes about 45 minutes each way. But that's not something any of his four grown children, aged between 20 and 30, are prepared to do.

Companies like Oxford now find themselves looking into commute times, where employees are likely to be located and lifestyle needs when advising with their own clients and tenants, he said.

The survey also found that even though more organizations are offering flexible work options, the average respondent to the survey worked only 1.8 days from home per month.

Calgarians are the most likely to work from home, putting in 2.5 days a month outside of the office.

The online survey was commissioned by Oxford Properties and conducted by Environics throughout June 2013. It included 2,009 Canadian office workers and had regional representation among office workers in major Canadian industries.