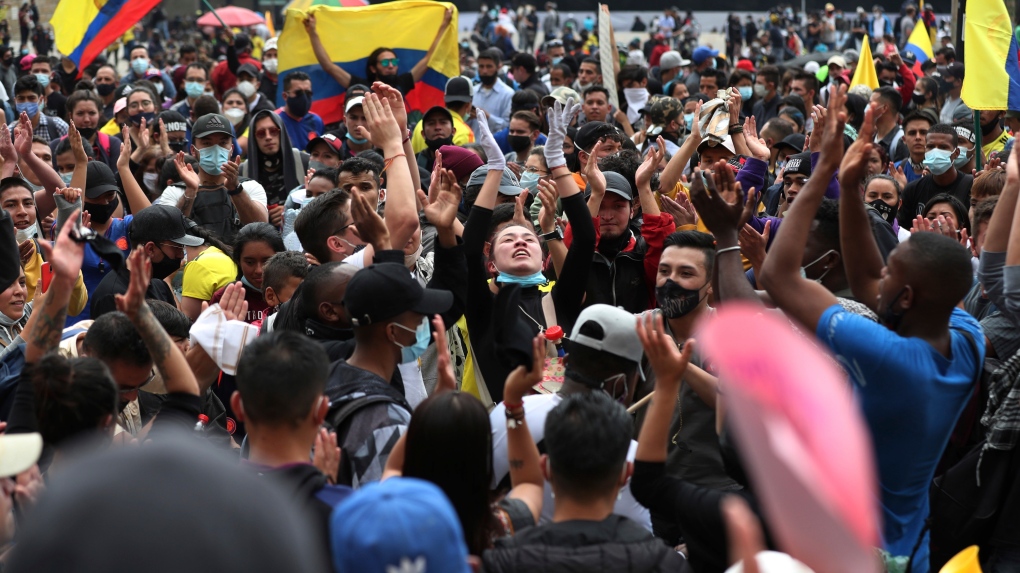 BOGOTA -- Protests in Colombia marked their ninth day on Thursday with smaller groups of demonstrators in cities including Bogota and Medellin, while industry groups warned of gasoline shortages across the country following road blocks.

Protests began last week in opposition to a now-canceled tax reform plan, but demonstrators have since broadened their demands to include government action to tackle poverty, police violence and inequality in the health and education systems.

Marches around the country have been marred by violence and 24 people have died, mostly demonstrators. International organizations have warned against excessive use of force by police.

Three people were shot in the small city of Pereira on Wednesday night, with a reward of up to 50 million pesos (around US$13,000) offered for information leading to the arrest of those responsible.

In Bogotá a group of hundreds of demonstrators, mostly young people, intermittently blocked a major road in the city's north, encouraging stopped vehicles to honk in support.

"I'm upset about the killings, there are no guarantees when you're exercising your right peacefully," said law student Andres Villalba, 19. He expressed sympathy for anti-riot police ESMAD, adding that they are "also afraid" but have to follow orders.

The human rights ombudsman lists the national police or ESMAD as presumed responsible for 11 of the two dozen officially confirmed deaths.

Local advocacy group Temblores has reported 37 deaths in connection with demonstrations while Human Rights Watch (HRW) said it has so far confirmed 11 were connected to protests, out of 31 reported to it.

"We had a much calmer day," Lopez said in a statement, adding a further 23 civilians and six police had been hurt but injuries initially appear minor.

Small groups of protesters also marched in Colombia's second-city Medellin, but dissipated amid heavy rain, a spokesperson for the mayor´s office told Reuters on Thursday.

Despite a decline in tension, the longevity of the protests has disrupted supplies of gasoline across the country, the National Federation of Fuel and Energy Distributors (Fendipetroleo) said in a statement.

"We have seen fuel shortages as a consequence of the national strike," Fendipetroleo said, listing cities including Cali, Ibague, and Pereira, as well as in other municipalities and provinces.