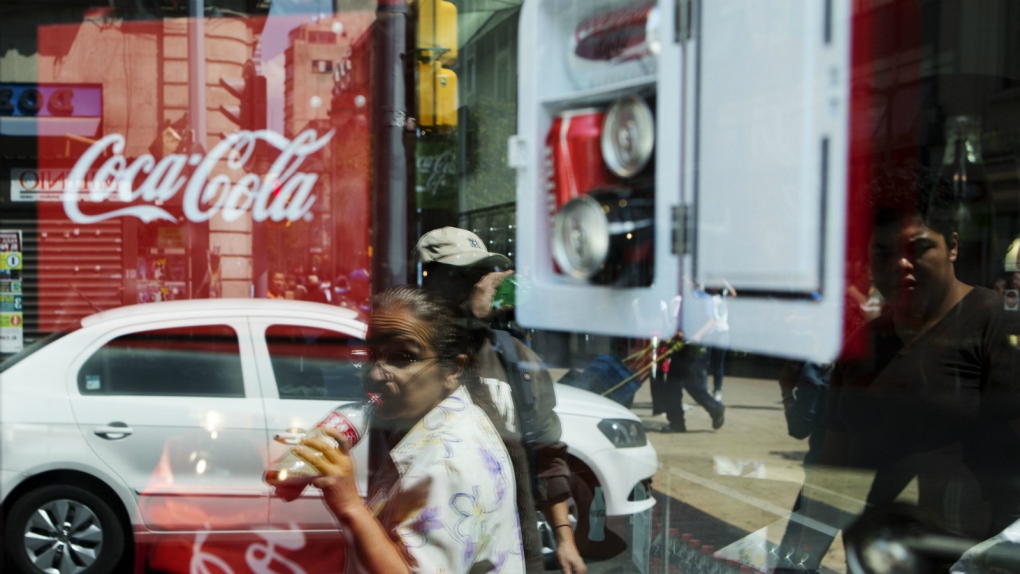 A woman is reflected in a Coca-Cola store window display as she drinks a Coke in Mexico City on Oct. 9, 2014. (AP Photo/Rebecca Blackwell)

MEXICO CITY - Mexicans are among the biggest soda drinkers in the world, so residents of the southern city of Ciudad Altamirano were hit hard when first Coca-Cola then Pepsi closed their distribution centres amid drug gang extortion demands.

To paraphrase an old Saturday Night Live routine, it's "No Coke, no Pepsi" for the city in the steamy southern state of Guerrero.

"Soft drinks form a part of our diet, people drink them in their homes, so imagine when the two main distributors in the whole region practically leave," Guerrero state security spokesman Roberto Alvarez said Wednesday. "It's huge."

PepsiCo Mexico said in a statement: "Our bottler Grupo Gepp made the difficult decision to suspend their operations in Ciudad Altamirano because the necessary conditions to distribute its products did not exist. PepsiCo respects the decision."

Alvarez said the government was still investigating exactly why the plant closed, but added: "We not ruling out that criminal groups have been pressuring (the company) to extort money from them."

That was apparently the reason why the Coca-Cola plant there closed in March. Coca-Cola FEMSA said that in January employees in Ciudad Altamirano "began receiving constant threats and attacks by organized crime," a phrase that usually refers to drug cartels. It also cited a "recent unjustified attack" on one of its employees, but did not specify what happened.

At the time, FEMSA complained of "a lack of rule of law and the prevalence of impunity" in the area, which has long been dominated by the Knights Templar cartel. The cartel, originally from the neighbouring state of Michoacan, has splintered and the local affiliate has apparently formed an alliance with the local branch of the La Familia gang.

"When Coca-Cola closed its operations, the only company that remained was Pepsi Cola, and they obviously became the target of the criminal groups," Alvarez said.

A Ciudad Altamirano store owner said the local drug gang is allowing two trucking companies to bring in soda from two nearby cities at 50 per cent higher prices. Local stores can only buy from those firms. If they try to bring in their own soda from outside, it is confiscated at gang checkpoints on highways leading into the city.

The store owner said the gang apparently got some of the excess profit from selling the trucked-in soda. The owner asked his name not be used for fear of reprisals from the gang.

He said there was an atmosphere of "pain and despair" in the city because the cartel has been extorting money from local business for years in the form of protection payments. For example, taxi or van drivers might be forced to pay a dollar or two a day to operate. Payments are larger for bigger businesses.

The extortion scheme has become so prevalent that the cartel recently sent market vendors and store owners a message saying that next year it would no longer demand payments from them, because so many of the snack and food products they sell were already paying protection money at the distributor level.