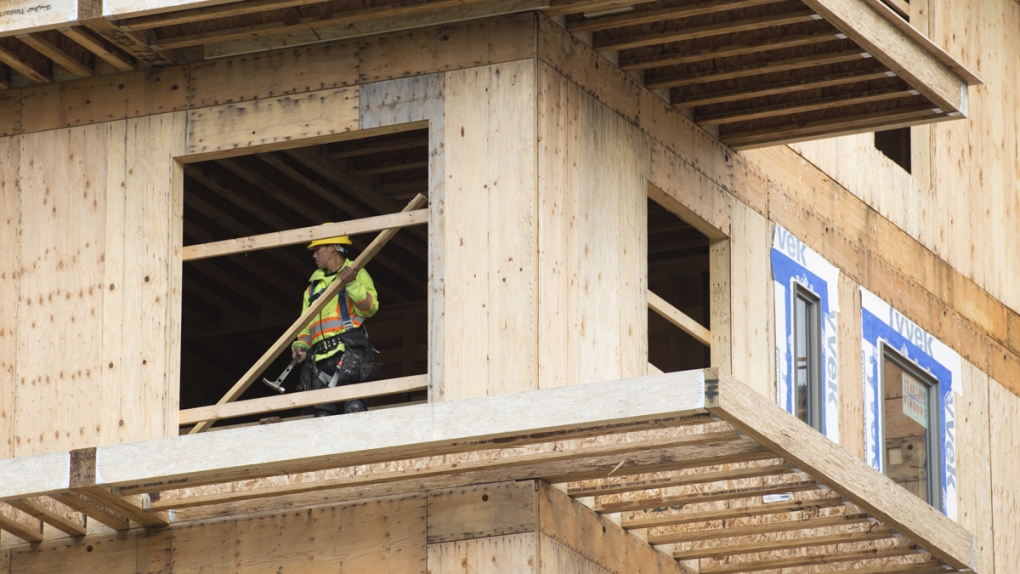 A worker is seen working on a construction project at UBC in Vancouver, on April 23, 2019. (Jonathan Hayward / THE CANADIAN PRESS)

OTTAWA -- The pace of Canadian housing starts slowed in September compared with August, but still came in better than expected.

However, economists on average had expected an annual pace of 214,500 for September, according to financial markets data firm Refinitiv.

"This continues to reflect strong demographic demand, both from international inflows and new households created within Canada," said Robert Kavcic, a senior economist at Bank of Montreal.

"There's a lot of homebuilding activity going on across the vast majority of Canada."

The overall decrease in the rate of housings starts last month came as the pace of urban starts fell 2.4 per cent to 208,503 units.

Urban starts of apartment, condo and other types of multiple-unit housing projects dipped 0.2 per cent to 159,742, while starts of single-detached urban homes fell 9.2 per cent to 48,761 units.

Rural starts were estimated at a seasonally adjusted annual rate of 12,699 units.

The six-month moving average of the monthly seasonally adjusted annual rates of housing starts was 223,507 in September, up from 218,782 in August.

The CMHC's monthly report follows industry figures that show home sales have been stronger than last year and stronger than the early months of 2019.

Last month, the Canadian Real Estate Association raised its 2019 forecast sales of existing homes to 482,000 units, up five per cent from 2018.

"Canada's housing sector is back on the front foot with resales picking up as the year progresses and homebuilding activity clearly displaying some momentum," Josh Nye, a senior economist at Royal Bank, said Tuesday.

"Ontario, the Prairies and Atlantic Canada are on the rebound while the trend in B.C. and Quebec remains strong despite slower starts in the last month or two."

In a separate report, Statistics Canada said Tuesday the value of building permits issued by Canadian municipalities rose 6.1 per cent to nearly $9.0 billion in August.

This report by The Canadian Press was first published Oct. 8, 2019.