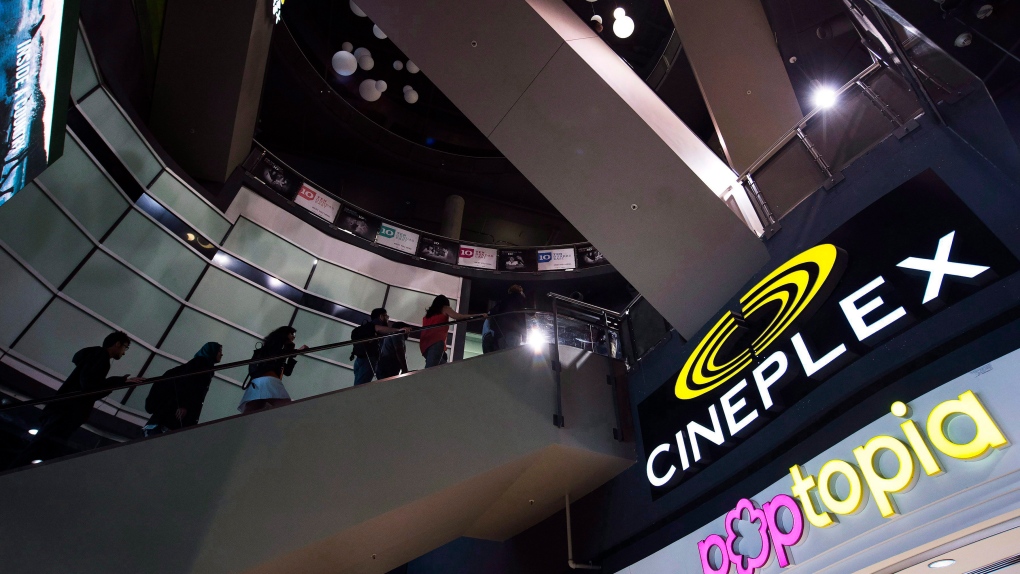 People make their way an escalator at the Cineplex Entertainment company's annual general meeting in Toronto on May 17, 2017. (Nathan Denette/THE CANADIAN PRESS)
TORONTO -

Cineplex Inc. has filed a cross appeal asking for even higher alternative damages, if a court overturns a ruling that forced the theatre company's once-suitor Cineworld Group PLC to pay $1.24 billion.

In documents filed with the Ontario Court of Appeal on Thursday, Cineplex argues it should be awarded more than $2.8 billion in damages because of diminished value and loss of performance that occurred after Cineworld walked away in June 2020 from its $2.18-billion deal to buy Cineplex.

If the court rules in Cineworld's favour, Toronto-based Cineplex wants U.K.-based theatre operator Cineworld to relinquish $1.1 billion in benefits it received, when the acquisition was terminated.

Cineplex, which refused to comment on this matter because it is before the court, said a relinquishment of those funds should be ordered to “prevent Cineworld from profiting through its wrongdoing, while Cineplex is left without a sufficient remedy.”

Cineworld said in a statement that it does not agree with the cross appeal, but will respond to it and not pay any damages while the matter is ongoing.

Cineplex's filing was made in response to an appeal Cineworld made earlier this month that claimed Barbara Conway of Ontario's Superior Court of Justice made “extricable legal errors,” when she ruled in Cineplex's favour in December.

The case Conway presided over stemmed from Cineworld's decision to terminate a deal to buy Cineplex, when the sale was about to close and the COVID-19 pandemic was in full swing.

Cineworld argued the terms of the deal allowed the company to call off the purchase because Cineplex deferred its accounts payable by at least 60 days, reduced spending to the “bare minimum” and stopped paying landlords, movie studios, film distributors and suppliers at the start of the pandemic.

In response, Cineplex called Cineworld's complaints “nothing more than a case of buyer's remorse.”

Cineplex said the moves it made that angered Cineworld were part of a normal course of business for theatre companies during a pandemic and did not damage its reputation with landlords and studios.

On Dec. 14, Conway sided with Cineplex and dismissed counterclaims from Cineworld.

Conway's decision and further appeals are being watched closely by the legal community because many believe they will reveal how judges will treat deals impacted by the pandemic that wind up in litigation.

The case is key for Cineplex and Cineworld because both have seen their coffers challenged as they have endured theatre shutdowns, reduced capacity measures and completed staff layoffs as public health officials and governments tried to quell the virus with closures.