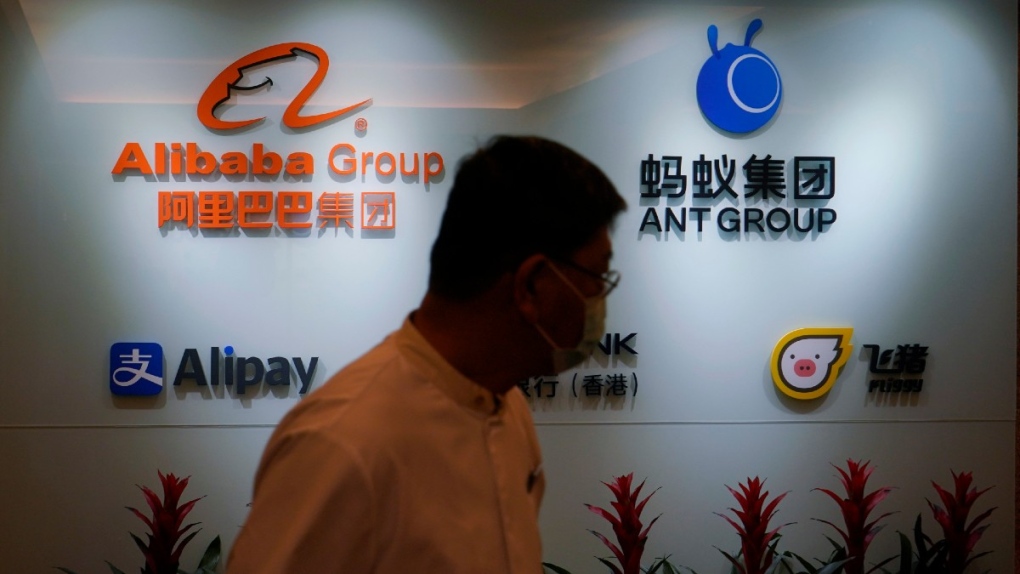 An employee walks past the logos of Ant Group and Alibaba Group at the Ant Group office in Hong Kong, on Oct. 23, 2020. (Kin Cheung / AP)

HONG KONG -- The world's largest fintech company, China's Ant Group, will try to raise nearly US$35 billion in a massive public offering of stock that would shatter records.

Alibaba-affiliated Ant Group, which operates a suite of financial products including the widely-used Alipay digital wallet in China and one of the world's largest money market funds, will hold dual listings in Shanghai and Hong Kong.

The company will raise about $34.5 billion from the share offering, which is expected to surpass oil company Saudi Aramco's $29 billion share sale last year, making Ant Group's offering the biggest in the world.

Ant Group will list on the Hong Kong stock exchange on Nov. 5, according to an exchange filing. A trading date for Shanghai has not been fixed.

The company has its origins in Alipay, which was initially created to serve as an escrow service between buyers and sellers on Alibaba's e-commerce platform. Alipay would hold the money paid by the buyer until the transaction was complete, before releasing the funds to the sellers in order to boost trust on the platform among consumers.

In 2011, Alipay was spun off from Alibaba into a separate company. It was later renamed Ant Financial, before its recent name change to Ant Group.

Over the years, Ant has introduced more financial services, and now operates Alipay as a digital wallet which allows users in China to transfer money to others and pay for purchases both online and offline. Its money market fund Yu'e Bao is also among the world's largest.

In recent years, Ant Group has also partnered with digital wallets around the world and expanded its services to merchants to allow Chinese tourists to pay via Alipay abroad. The company has over a billion users globally.

Ahead of the IPO, Ant Group would be valued at about $280 billion. If the company exercises its greenshoe option, which would allow it to sell more shares than initially planned, it could raise another $5.17 billion, taking its valuation to about $320 billion.

The company plans to issue up to 1.67 billion shares in both Hong Kong and Shanghai, taking the total number of shares issued to about 3.4 billion.

Alibaba, which currently owns a third of Ant Group, will subscribe to 730 million shares and will hold a stake of about 32% after the IPO.

The pricing announcements for Ant Group's dual IPOs also came days after Alibaba founder Jack Ma called the company's offering a "miracle", as it was the first time that such a big listing was priced outside of New York.

"We didn't dare think about it five years, or even three years ago," Ma said at a financial conference in Shanghai on Saturday.

Ma also criticized banks in China, saying that they were operated like "pawn shops" since they typically require one to have sufficient collateral before making loans.

He advocated for financial reform, saying that China's relatively young financial system should be driven by technologies such as big data, cloud computing and blockchain, instead of following traditional methods of banking that involves large amounts of red-tape.