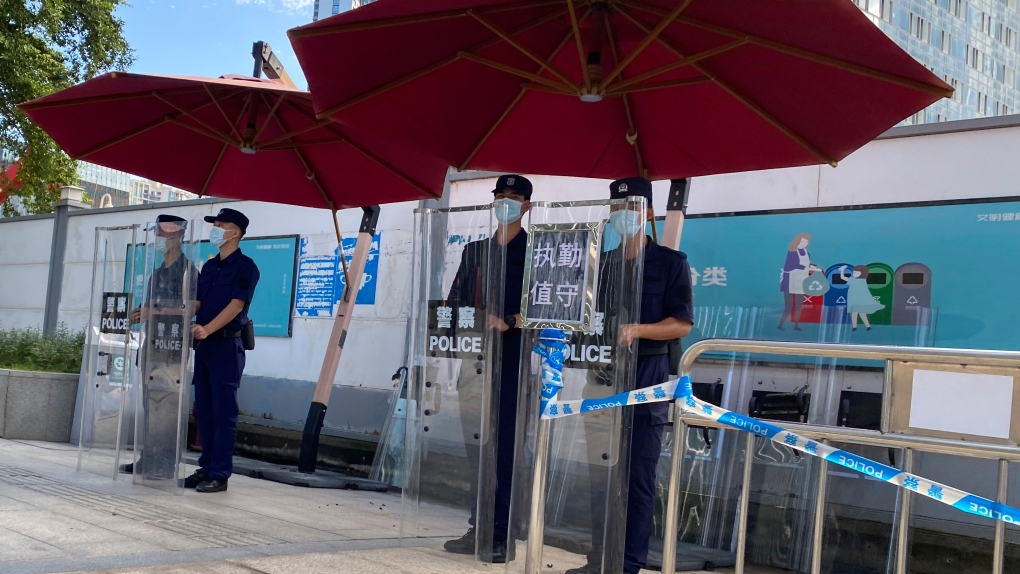 Trying to dispel investor fears, some Chinese banks are disclosing what they are owed by a real estate developer that is struggling under US$310 billion in debt and say they can cope with a potential default.

The announcements came as Evergrande Group promised to talk with some individual investors in its debt. Other creditors waited to see whether Beijing will step in to oversee a restructuring to prevent financial disruption.

Evergrande's struggle to meet government-imposed debt limits has prompted fears a default might disrupt the Chinese economy or global financial markets. Ratings agencies say a default is likely. Economists say Beijing can prevent a credit crunch in China but wants to avoid bailing out Evergrande while it tries to force companies to reduce debt levels.

One of Evergrande's biggest lenders, Zheshang Bank Co., said it is owed 3.8 billion yuan (US$588 million) and has "sufficient collateral."

"The overall risk is controllable," the bank said in a written answer to questions on a website run by the Shanghai Stock Exchange. It said a "risk situation ... will not have a significant impact" on the bank.

Others, including Shanghai Pudong Development Bank Ltd., gave no financial figures but said their lending was small, tied to individual projects and secured by claims to land. The Pudong bank said it was in "close communication" with Evergrande.

Changshu Rural Commercial Bank Co. in the eastern province of Jiangsu said it is owed 3.9 million yuan (US$600,000). The biggest state-owned commercial lenders including Industrial and Commercial Bank of China Ltd. didn't respond to questions.

Evergrande was caught by stricter borrowing limits imposed on real estate last year by regulators who are trying to reduce surging debt levels the ruling Communist Party worries might drag on economic growth that already is in long-term decline.

Regulators have yet to say what Beijing might do, but economists say if the ruling party gets involved, it probably will focus on making sure families get apartments they already have paid for, rather than trying to bail out banks or other creditors.

Other major developers such as Vanke Co., state-owned Poly Group and Wanda Group have not reported similar problems. But hundreds of smaller developers have shut down since regulators in 2017 started tightening control over financing.

On Friday, investors in Evergrande debt who gathered at its headquarters in the southern city of Shenzhen said the company agreed to hold a phone meeting with them. Dozens of police officers with six vehicles stood guard outside the building.

There was no word on whether that meeting took place, but an investor from Shanghai said he talked separately with Evergrande employees and was told the company has little cash and no "concrete solution." The man asked not to be identified by name to avoid attracting attention to himself and wouldn't say how much money he had at stake.

Also Friday, Evergrande's electric vehicle unit, which has a separate stock market listing in Hong Kong, said it suspended paying some expenses due to a "serious shortage of funds." Evergrande New Energy Vehicle Group Ltd., which also has a health care business, said it was talking to potential new investors but had reached no agreements.

Evergrande said earlier it negotiated details of an interest payment due Thursday to banks and other bondholders in China but gave no details.

The company has yet to say whether it will make an US$83.5 million payment that was due Thursday on a bond abroad. It has 30 days before it is declared in default, but economists say the company appears to be focused on repaying creditors within China.

British bank HSBC Holdings PLC, reported earlier to be an investor in the bond, declined to comment.

Meanwhile, Evergrande is offering to repay some creditors by handing over apartments and other property.

The offer applies to investors who hold a total of about 40 billion yuan (US$6 billion) of debt issued by its Evergrande Wealth unit. News reports say they usually are retail customers, employees of Evergrande contractors and the company's own workforce.

The gang that kidnapped a group of 17 American and Canadian missionaries in Haiti has asked for US$1 million each for their release, a top Haitian official said Monday, according to the Wall Street Journal.

Pfizer has asked Health Canada to approve the first COVID-19 vaccine for children aged five to 11 years old. It was authorized for people at least 16 years old last December, and for kids between 12 and 15 in May.

Tk'emlúps te Secwepemc Chief Rosanne Casimir told Prime Minister Justin Trudeau that his visit to the First Nation community Monday is 'bittersweet' following his notable absence from their ceremony to recognize the first National Day for Truth and Reconciliation.

As polls in the Alberta municipal elections are set to close, voters in the province have also been given the chance to voice their opinions on federal equalization payments.

More COVID-19 booster shots may be on the way -- but when it's your turn, you'll get an extra dose of the original vaccine, not one updated to better match the extra-contagious delta variant. And that has some experts wondering if the booster campaign is a bit of a missed opportunity to target delta and its likely descendants.

Pattie Lovett-Reid: Talking about finances may not be romantic, but is necessary

Having a clear and honest discussion about your financial situation and money mindset before you walk down the isle just seems to make sense, but it isn't always easy, CTV's chief financial commentator Pattie Lovett-Reid writes in her latest column on CTVNews.ca.