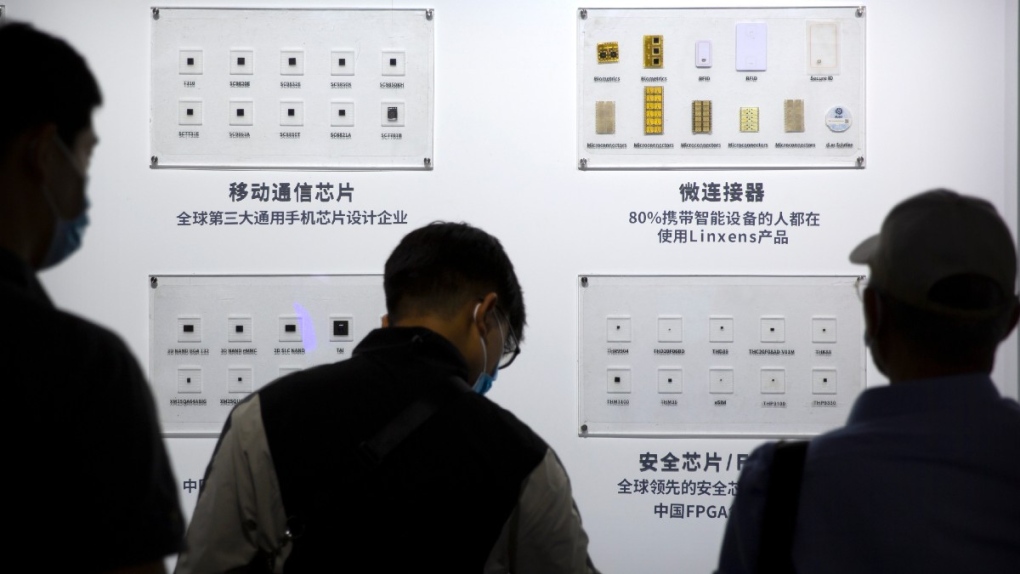 Semiconductors on display from the Tsinghua Unigroup at the China Beijing International High Tech Expo in Beijing, on Sept. 19, 2020. (Mark Schiefelbein / AP)

BEIJING -- China's leaders are vowing to make their country a self-reliant "technology power" as a feud with Washington cuts access to U.S. computer chips and other high-tech components, hampering Beijing's industrial ambitions.

Leaders of the ruling Communist Party made the announcement Thursday after a meeting to draft a development blueprint for the state-dominated economy over the next five years.

President Xi Jinping's government is trying to limit damage from the Trump administration's curbs on technology sales to China in a fight over security and spying. Those threaten to disrupt plans to create Chinese companies able to compete in telecoms, biotech and other fields, which communist leaders see as a path to prosperity and global influence.

Five-Year Plans, issued since the 1950s, form the basis of regulation and industry initiatives in an economy where the ruling party still plays a leading role after four decades of market-style reforms. The full plan is due to be released in March. Changes in regulations and plans for individual industries will be announced after that.

Thursday's statement promised to promote "green and low-carbon development" and to raise Chinese living standards. It called for unspecified steps to strengthen the 2.3 million-member People's Liberation Army and to " improve our strategic ability to defend national sovereignty."

China faces a "complicated international situation," it said, but it made no mention of the coronavirus pandemic or its tariff war with Washington.

Technology is a cornerstone of the ruling party's marathon campaign to promote self-sustaining growth based on domestic consumer spending and to build a "moderately prosperous society."

China's factories assemble most of the world's smartphones, personal computers and consumer electronics but need U.S., European and Japanese components. Its communist leaders see that as a strategic weakness.

Thursday's statement cited no specific technologies, but leaders are especially worried about China's reliance on U.S. providers of processor chips used in smartphones, electric cars and other technologies central to their development plans.

Semiconductors are China's biggest single import by value, ahead of crude oil.

Companies including telecom equipment giant Huawei Technologies Ltd., China's first global tech brand, are developing chips and other components. But, like their Western and Asian counterparts, none can supply all its own needs.

Last year, the White House added to that by tightening controls on Chinese purchases of chips and other components.

"The trade war and growing tensions with foreign governments have heightened concern about reliance on foreign inputs," Julian Evans-Pritchard and Seana Yue of Capital Economics said in a report ahead of Thursday's announcement.

"The push for self-sufficiency is increasingly visible," they wrote.

Last year's U.S. curbs cut off access to chips and most other technology for Huawei. American officials say it might facilitate Chinese spying, an accusation the company denies. This year, Washington barred global manufacturers from using U.S. technology to produce chips for Huawei, including those designed by its own engineers. Huawei's revenue still rose 9.9% over a year earlier in the quarter ending in September, but executives say its sales of smartphones and network equipment are likely to suffer.

In September, the Commerce Department further obstructed Beijing's efforts to develop its own chipmakers by restricting U.S. technology sales to the biggest, Semiconductor Manufacturing International Corp.

Earlier industrial plans include "Made in China 2025," issued in 2015, which calls for creating global competitors in 10 industries such as electric cars. That triggered an international backlash, as governments complained Beijing might use subsidies and market barriers to promote them, violating its free-trade commitments.

"For sectors that are already under U.S. blockades (such as semiconductors), China is likely to double down and strengthen government support," said Vincent Zhu of Rhodium Group in a report ahead of the party congress.

However, a "wish list" of favoured businesses "could easily be used as a U.S. `hit list,' further restricting exports of components critical to those industries," Zhu wrote. That means Beijing "will have to think hard before committing to an overt industrial policy," he said.

Chinese semiconductor imports in 2020 should exceed $300 billion for a third straight year, according to the deputy chairman of the China Semiconductor Industry Association, Wei Shaojun, cited in Chinese news reports. The association says imports peaked at $312 billion in 2018. Last year's were $304 billion.

Limits on access to foreign technology could knock as much as 0.5 percentage points off China's economic growth over the next decade, according to UBS economists Ning Zhang and Tao Wang.

Despite disruptions from trade tension and the pandemic, forecasters say the Communist Party is likely to hit its economic targets from the previous Five-Year Plan.

In 2014, the Cabinet announced a goal of making China a leader in semiconductors by 2030. Official plans call for China to produce 70% of the semiconductors it uses by 2025. It now makes about 20%.