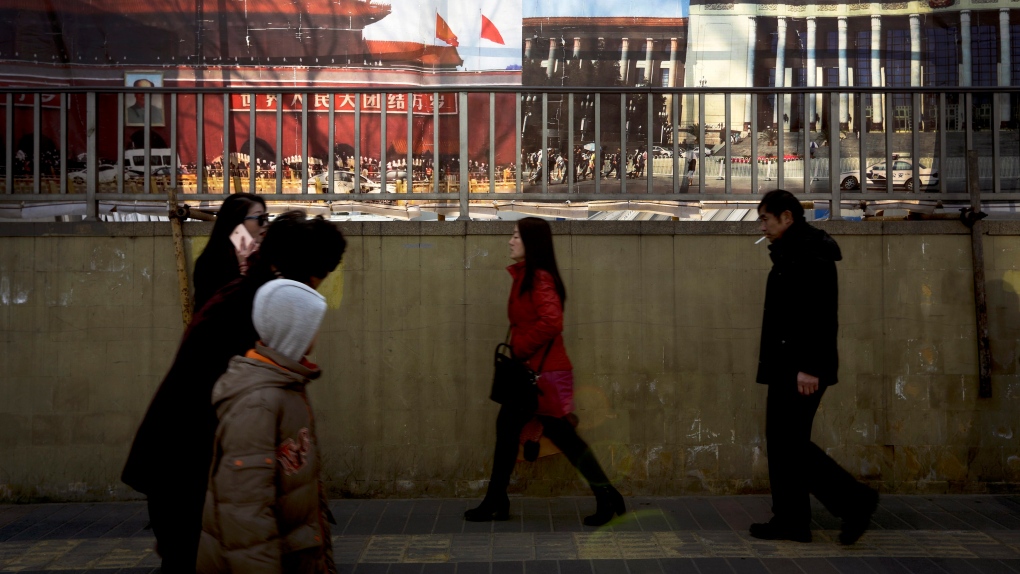 People walk past posters of Tiananmen Gate, left, and the Great Hall of the People on display near a building under construction in Beijing, Tuesday, Jan. 19, 2016. (AP Photo/Andy Wong)

BEIJING -- With home sales crashing, real estate agent Zhang Yonggang is tightening his belt, part of a plunge in Chinese consumer demand that is a bigger threat to economic growth than Beijing's tariff war with Washington.

Zhang, who works in the central city of Taiyuan, said his office sold no apartments last month after Beijing tightened lending controls in July to rein in housing costs and debt. Zhang, 42 and married with a teenage son, said his income has fallen by half from a year ago.

"I have no money to buy a home and no plans to change cars," Zhang said. "It is definitely the toughest time I've ever seen."

Communist leaders are counting on consumers to power China's economy, replacing trade and investment. But shoppers, spooked by the tariff war and possible job losses, are cutting spending on cars, real estate and other big-ticket purchases.

Economic growth sank to a three-decade low of 6% over a year earlier in the quarter ending in September. That is stronger than most major countries but a strain for Chinese companies that need to repay debt.

Factory activity shrank more than expected in October, according to an official trade group, the China Federation of Logistics & Purchasing. Analysts said that suggested an uptick a month earlier didn't mark the start of a recovery.

On Thursday, the ruling party's Central Committee affirmed support for private business within an economy dominated by state industry and gave no sign of plans to change economic strategy.

But leaders openly fret over slumping consumer spending and other domestic activity.

Premier Li Keqiang, the top economic official, told local leaders last week to fight "downward pressure" on the economy and "make sure targets for this year are achieved."

"Many real economic entities are struggling amid weak domestic demand," the premier said at a meeting with provincial governors, according to a Cabinet statement.

Beijing has tried to stick to plans to nurture self-sustaining, consumer-driven growth instead of resorting to stimulus, which usually means splurging on construction paid for with bank loans. That might re-ignite a surge in debt that forecasters estimate has risen as high as the equivalent of 300% of China's annual economic output.

"China is willing to accept slower growth, but only up to a point," Rory Green of TS Lombard said in a report.

If job losses spike, "of course Beijing will have to step in with a major stimulus," Green said.

Trump's punitive duties on billions of dollars of Chinese goods in a fight over Beijing's trade surplus and technology ambitions have battered exporters. But their impact on the rest of the economy has been smaller than some forecasters expected.

And trade overall is stronger than expected. Shipments to the United States fell nearly 11% in the first nine months of 2019, but exports to the whole world were off only 0.1%.

Retail sales rose 8.2% over a year earlier in the nine months ending in September. But some industries suffered painful contractions: Auto sales fell 11.7%.

The pressures are reflected in Anna Li's dilemma. The 28-year-old employee of an information technology company in Beijing plans to buy an apartment, but first she wants a new job. She has looked since last year and found nothing because companies have cut hiring.

"I used to have a plan to buy an apartment next year, but now it depends on the success of my job hunting," said Li.

The International Monetary Fund is forecasting annual growth of 6.1% this year, down from last year's 6.6% and just above the official minimum target of 6%. Next year, the IMF expects a further decline to 5.8%.

Some analysts question whether China really is achieving even that growth and say the real rate may be closer to 3%. They blame flaws in data collection and political pressure to make results look better.

Economic activity might be up to 21% smaller than official data show, according to Yingyao Hu and Jiaxiong Yao at Johns Hopkins University.

Government data assume all investment pays off, but much spending in 2012-17 went into unproductive projects, say Hu and Yao. They cite evidence including satellite photos that show nighttime cities darker than they should be with more activity.

That could mean Chinese debt is higher relative to the size of the economy than thought. That might further depress consumer demand because more national income must be diverted to repay debt.

Leaders are trying to reassure U.S. and other foreign companies that have postponed or moved planned investments out of China to avoid tariff hikes.

Li, the premier, has told a string of American, European and other visiting business leaders they are welcome despite Beijing's 15-month-old war with Trump.

Beijing has announced market-opening measures over the past two years including abolishing limits on foreign ownership in securities trading, auto manufacturing and some other industries.

"I believe the further improvement of China's business environment will provide larger opportunities," Li told Evan Greenberg, the chairman of the U.S.-China Business Council, which represents companies that do business with China, in an Oct. 17 meeting.

The tariff war has made Beijing determined to adapt to slower growth and less reliance on debt in what it views as a period of strategic competition, said Green of TS Lombard.

Chinese leaders don't want to use credit-fueled stimulus and "leave themselves vulnerable to future economic and financial sanctions," he said.

Plus, Green said, Trump is "the perfect scapegoat" to blame for slower growth.