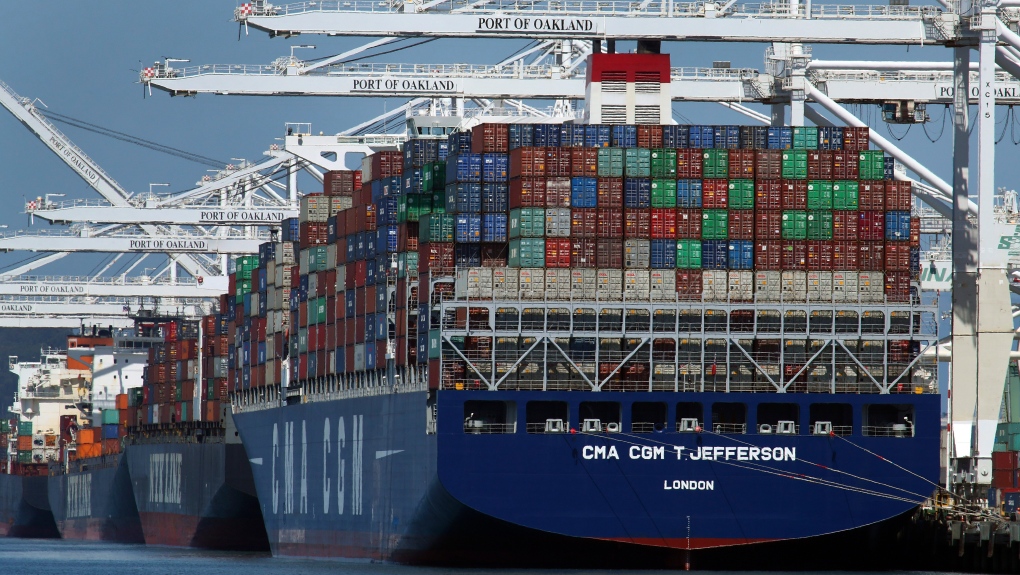 In this May 21, 2018, file photo container ships are unloaded at the Port of Oakland in Oakland, Calif. (AP Photo/Ben Margot)

BEIJING -- China's factory output and consumer spending weakened in April as a tariff war with Washington intensified, adding to pressure on Beijing to shore up shaky economic growth.

President Xi Jinping's government has expressed confidence the economy can withstand U.S. tariff hikes in their fight over Chinese technology ambitions and other trade irritants. But forecasters say damage might spread beyond export-driven manufacturing industries if consumer and business confidence suffers, depressing spending and investment.

Consumer demand is "softening at a time when the export sector is taking a big hit," Rajiv Biswas of IHS Markit said in a report.

April's growth in factory output decelerated to 5.4% over a year earlier from March's 8.5% growth, according to the National Bureau of Statistics.

Retail sales growth fell to 7.2% over a year ago from the previous month's 8.7%. That is a setback for Chinese leaders who want to promote self-sustaining economic growth based on domestic consumption instead of trade and investment.

Chinese economic growth held steady in the latest quarter at 6.4% over a year earlier. But that was supported by higher government spending and bank lending to reverse an economic slowdown.

Forecasters say a U.S. tariff increase on $200 billion of Chinese imports that took effect Friday could trim economic growth by 0.5 percentage points, stalling a recovery that appeared to be gaining traction.

They say the loss could widen to 1 percentage point if both sides extend penalties to all of each other's goods. That would push annual growth below 6%, raising the risk of politically dangerous job losses.

"Policymakers are likely to step up stimulus again, mainly through pushing banks to make more loans and ramping up fiscal spending," Macquarie Bank said in a report.

It warned of "rising volatility" in financial markets due to uncertainty about trade and economic growth.

"Things might have to get worse first to convince politicians to be realistic and get things done," said the report.