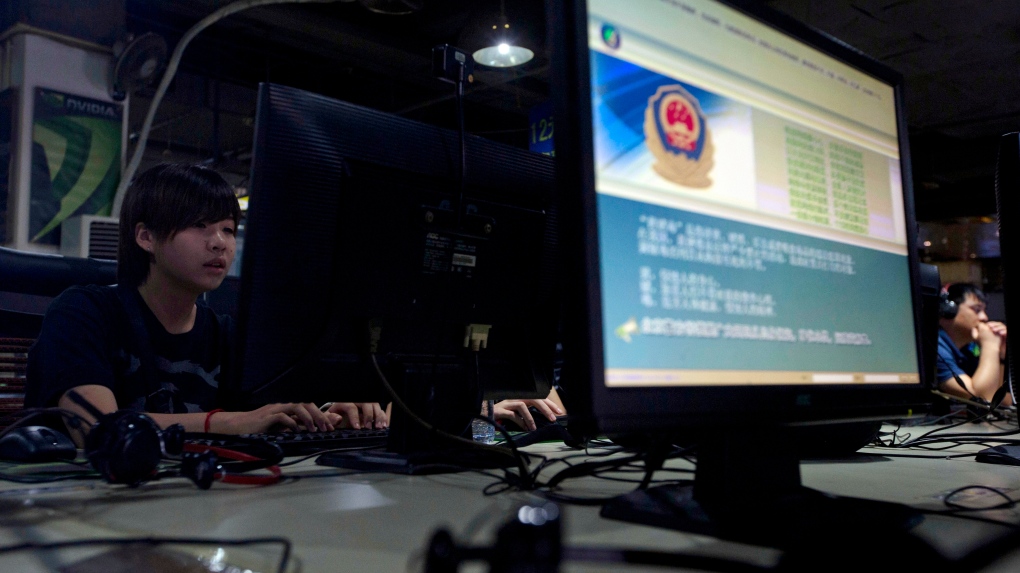 In this Aug. 19, 2013 file photo, computer users sit near a monitor display with a message from the Chinese police on the proper use of the Internet at an Internet cafe in Beijing, China. (AP Photo/Ng Han Guan, File)

BEIJING -- Chinese authorities have detained a software developer for selling computer services that allow internet users to evade China's "Great Firewall," which blocks access to thousands of websites, from Facebook to Twitter to some news outlets, a media report said Monday.

The software developer, who is from the coastal province of Jiangsu, near Shanghai, was arrested in late August and held for three days for building a small business to sell virtual private networks, the Global Times newspaper reported, citing the official Xinhua news agency. VPNs create encrypted links between computers and allow Chinese web users to see blocked sites by hiding the address from government filters.

Some internet businessmen have faced far harsher punishments: Earlier this year, a 26-year-old entrepreneur who sold VPN services in Dongguan, near Hong Kong, was sentenced to nine months in prison.

Beijing launched a campaign early this year to stamp out the use of unlicensed VPNs, part of a broader crackdown over control of information ahead of October's twice-a-decade ruling party congress. China restricts how licensed VPNs are used, but has yet to disclose what those restrictions entail.

VPNs are part of daily life for many Chinese. A survey by GlobalWebIndex said 14 per cent of Chinese internet users employ a VPN daily, meaning China may have as many as 100 million regular users.

Some 8.8 per cent of people in the survey use VPNs to look at "restricted sites," according to GlobalWebIndex.

China has introduced a range of internet restrictions over the past year, including requiring every business with a website to obtain an Internet Content Provider license.

Wang Sixin, deputy dean of the School of Literature and Law at Communication University of China, told the Communist Party-owned Global Times that the new regulations are aimed at creating rule of law on the internet.

Web users "will be prone to harmful -- even terrorist -- information on the internet if it isn't appropriately regulated," Wang said.