Chickens four times bigger than they used to be: study 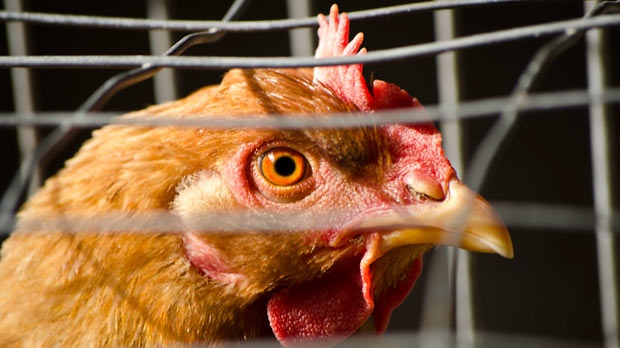 Chickens have really beefed up their size since the 1950s.

According to a recent University of Alberta study, chickens today are four times bigger than they were 60 years ago.

The study, published in the journal Poultry Science, compared three types of chickens: one kind that hasn't been changed by selective breeding since 1957, a second that has been the same since 1978, and a third modern commercial strain called the Ross 308 broiler.

With identical diets, the modern chickens grew to more than four times the size of their '50s counterparts.

The modern chickens were about double the size of the 1978 breed, which is what Martin Zuidhof, one of the authors of the study, expected.

"We had never actually tested our 1978 line before, but where they fell were very consistent with what we believed would be the case based on historical selection for growth rate and efficiency," said Zuidhof, an associate professor at the University of Alberta whose research focuses on how factors like nutrition and genetics affect the growth of poultry.

Decades of breeding chickens for meat have caused the breast size to increase 80 per cent, the study showed.

And according to the National Chicken Council, the average age at which these chickens go to market has decreased from to 47 days in 2011 from 70 days in 1955. At the same time, average market weight has almost doubled from 3.07 pounds to 5.80 pounds.

The two older breeds used in the study exist solely to keep a living record of what chickens were like in the past.

To create chickens that haven't changed since 1957 and 1978, researchers stopped selectively breeding the birds for their size decades ago, letting them reproduce at random since then.

"Basically, they're a benchmark in time of what the commercial meat type chickens were in the years that the random breeding started," Zuidhof said.

Instead of relying on old data, researchers were able to control the birds' environment and feed, ensuring that the chickens were raised in identical conditions.

The results showed that modern chickens naturally grow larger and at a faster rate.

But despite the success breeders have seen, cultivating meatier chickens has had its hitches. With each growing generation, health problems became more prevalent.

"Twenty-five years ago was probably the low point in the industry in terms of negative consequences of selection," he said. "There were metabolic disorders, heart attacks, just difficulties that were associated with rapid growth."

Breeders have since begun selecting more robust chickens - birds with stronger legs, for example - rather than just the largest of the bunch.

The bulked up birds are still more prone to issues than they once were, but those issues are manageable, said Zuidhof

Why are chickens so much larger? Dispelling the myths

"There's a lot of criticism or ignorance about why chicken grow so fast," said Zuidhof. "If you look at a chicken from 50 years ago and today's chicken, it's natural to say, "Wow, what's going on, that seems like something that's pretty unnatural.'"

But it's not steroids, hormones or any artificial enlargers, said Zuidhof. Breeders' ability to grow larger birds comes down to how quickly the animals reproduce.

While a cow might have one calf per year, chickens can produce about 120 chicks per year, which can breed after 25 weeks. Breeding the biggest of the bunch quickly results in generations of chunkier chickens.

"The success of the selection parameters is much higher in poultry than it is in other livestock," Zuidhof said. "That's why we're not seeing the same kind of gains in cattle and pigs."

And though some might be turned off by the thought, it's really our eating habits that have driven up the size of the birds.

North Americans' appetite for the white meat has grown alongside the size of our poultry. According to the National Chicken Council, the average American consumed about 34 pounds of chicken per year in 1965. Today, the average person eats more than 83 pounds of chicken - significantly more than both beef and pork, which have seen a steady decrease in per capita consumption.

This motivates breeders to continually aim for more meat per chicken - a trend Zuidhof doesn't think will stop.

"I personally don't see a lot of change in the trajectory," he said. "People are concerned about animals, and that's great, but people also want the cheapest food when they go to the supermarket."

Retail price of meat per pound, in cents

Meat consumption per capita, in pounds