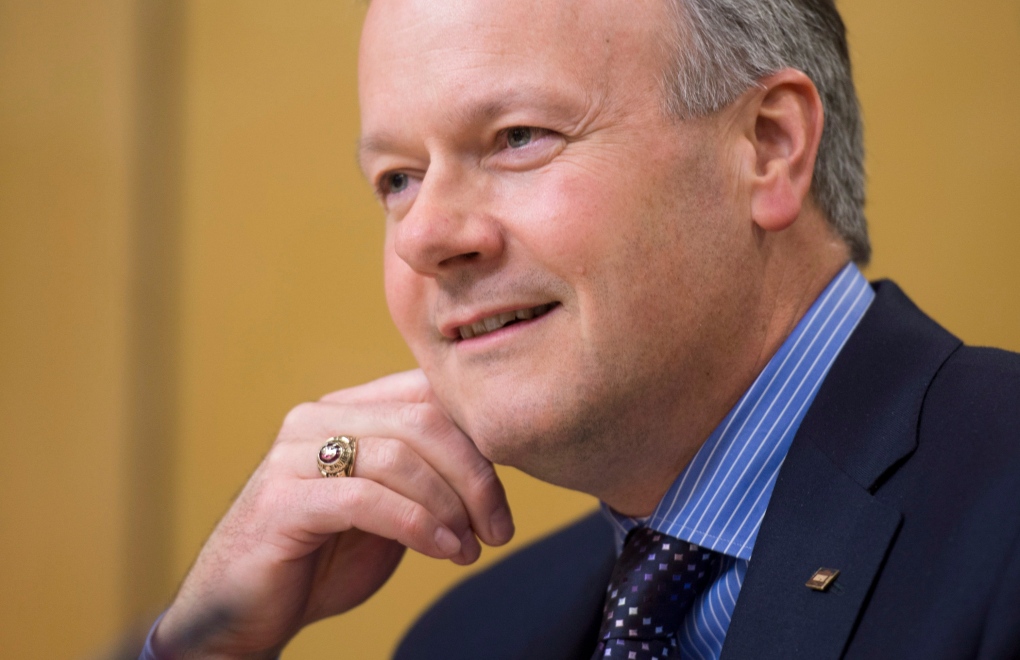 OTTAWA -- Canada's housing market is not in a bubble and not likely to suffer a sudden and sharp correction in prices unless there is another major global shock to the economy, Bank of Canada governor Stephen Poloz said Wednesday.

The central banker, testifying before the Senate banking committee on his latest economic outlook, said he believes the most likely scenario is a soft landing where home prices stabilize, although he acknowledged that an imbalance in the market and high household debt remain key risks.

Poloz used the testimony to pointedly disagree with a couple of forecasting organizations that weighed in this week on the Canadian situation -- the Fitch Rating service that judged Canada's housing market as 21 per cent overpriced, and an OECD recommendation that he start raising interest rates in a year's time.

"Our judgment is (the housing market) is a situation that is improving, this is not a bubble that exists here that would have to be corrected," he said. "If there is a disturbance from outside our country that's another analysis."

Poloz said most of the fundamentals surrounding the housing market appear headed in the right direction. The prospects for the economy is improving, he noted, which should create more jobs.

As well, he said banks are now demanding higher credit scores from new borrowers and added that he does not believe there has been serious overbuilding in the housing market.

"It looks expensive," he said of home prices. "But which markets are expensive? Well those markets have been expensive my whole life,"he said, noting that Toronto and Vancouver both absorb high rates of immigration.

Asked to put odds on his soft landing scenario, Poloz said he would place it in the 60-to-80 per cent probability range.

Poloz was asked about the Organization for Economic Co-operation and Development's advice this week that the Bank of Canada start moving off its one per cent policy rate by the end of 2014 and keep hiking until it reaches 2.25 per cent by the end of 2015.

In unusual clarity for a central banker, Poloz said he respectfully disagreed. In his analysis, he said, there remains plenty of slack in the Canadian economy and inflation, at 1.1 per cent, is well south of the central bank's two per cent target.

"Those things together give us the judgments we reach and obviously they differ in a material way from what the OECD is saying ... and it's our job to reach that final conclusion," he told the senators.

Last month, Poloz surprised markets by dropping the central bank's official tightening bias and moved to a more neutral stance, which signals that the bank is as likely to cut as to raise interest rates in the future.

Analysts interpreted the move as the bank telling markets it won't likely start raising borrowing costs until the first or second quarter of 2015. Markets reacted to that assessment by selling off the loonie.

On the overall economic outlook, Poloz said he believes the global economy is "healing" and that Canadian growth will start picking up next year as the U.S. recovery intensifies.

The testimony before the banking committee was the first for Poloz, who took charge of the central bank in June, and senators took the opportunity to question him on a wide range of topics, including the dearth of women on the new currency.

Poloz repeated previous remarks that he was "wide open" to the idea of finding images that include more women in the next roll-out of bank notes, but cautioned that won't happen overnight -- the current new bills took eight years to develop.

On the issue of Dutch disease -- the theory that a commodity bubble such as oil exports pushes up the value of a nation's currency and undermines manufacturing -- Poloz said that while generally a "myth," there was a certain element of truth to the theory.

He said oil exports helped maintain the Canadian economy during the recession and did contribute to the loonie's appreciation, increasing competitive pressures on the manufacturing sector.

But he said the collapse in global demand also was a major factor and overall, revenues from the oil exports were a net benefit to Canada.