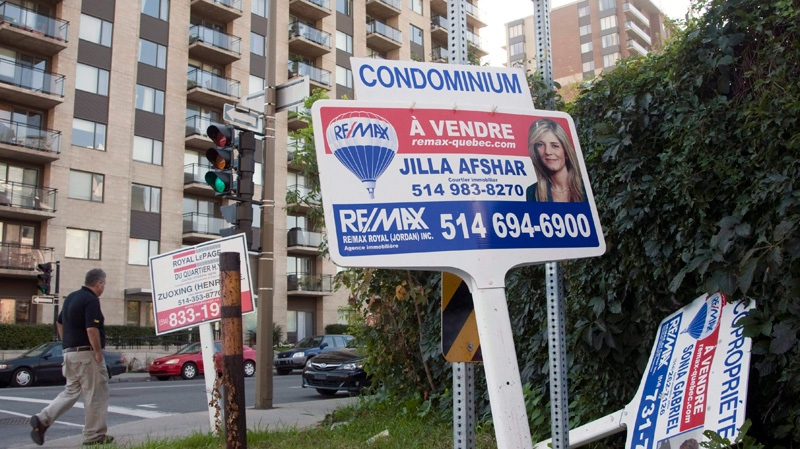 OTTAWA -- Canadian home sales posted a small month-over-month increase in September, but the market showed some signs of cooling and the number of new listings declined.

The Canadian Real Estate Association said Tuesday that home sales were up just under one per cent from August to September, while overall activity remained on par with the 10-year average in September.

And while last month's sales were up 18.2 per cent compared with September 2012, CREA said that was because last year's figures were unusually weak.

"Year-over-year increases in the sales over the past couple of months highlights how activity softened across much of the country following the introduction of tighter mortgage rules last summer," said Gregory Klump, CREA's chief economist.

"While the momentum for sales activity began improving a few months ago, it may be losing steam after having only just climbed back in line with an average of the past 10 years," he added.

Sales improved on a month-over-month basis in just over half of all local markets, with gains in Greater Vancouver and Greater Toronto offsetting declines in Calgary and Montreal.

About 340,980 homes have traded hands across the country so far this year, or 1.8 per cent below levels recorded in the first three quarters of 2012.

Robert Kavcic, a senior economist with the Bank of Montreal, said the monthly figures were somewhat better than expected, but cooler than the 2.6 per cent per month pace seen over the prior four months.

"We suspect that much of the strength over that period was in response to higher mortgage rates i.e., buyers jumping in before lower-rate approvals expired and that activity should fade later in the year," he said.

The level of sales, he added, is only about five per cent above the 10-year average.

If Greater Toronto, Greater Vancouver and Calgary were removed from the national average price calculation, the year-over-year increase would be 4.3 per cent.

There were 1.4 per cent fewer newly listed homes in September compared with August, the association said, adding that while the Canadian housing market has tightened it continues to remain balanced.

"Any worry about a hard landing in Canadian housing has quickly become a faint memory and underlying conditions are more balanced than the flashy headline results suggest," Kavcic said.

"Softer activity through the fall should keep price growth (and Bank of Canada concerns) in check."

The Canadian Real Estate Association is one of Canada's largest single-industry trade associations, representing more than 106,000 realtors working through more than 90 real estate boards and associations.