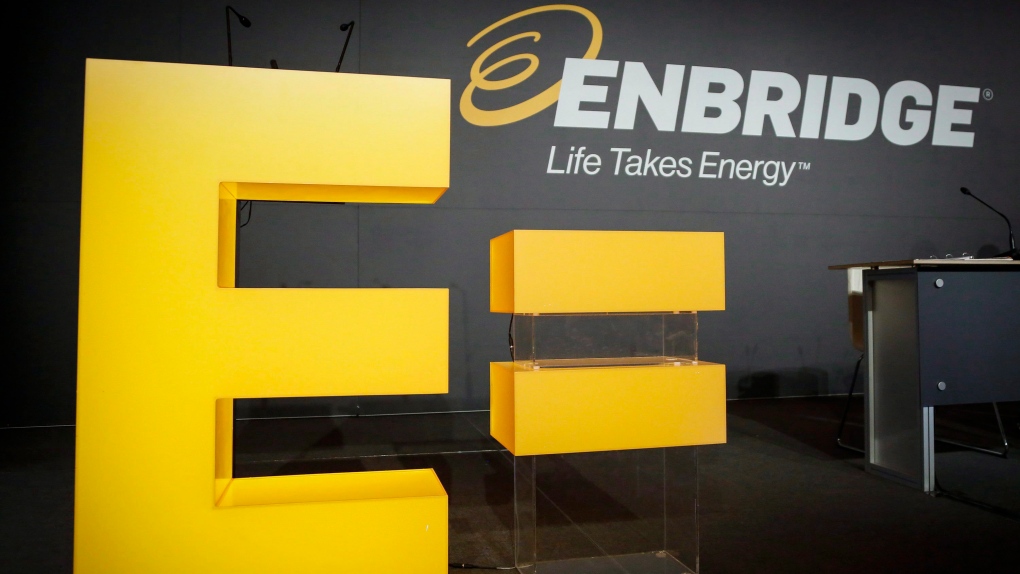 Enbridge company logos are shown on display at the company's annual meeting in Calgary, May 12, 2016. (Jeff McIntosh / THE CANADIAN PRESS)

PETOSKEY, MICH. -- A Canadian-based energy transportation company's preparation of a proposed tunnel that would house a petroleum pipeline caused a borehole to collapse in Michigan, which left debris in the waterway.

Enbridge Energy had been collecting rock and soil samples, which it finished Sept. 12 the Petosky News-Review reported. But the company did not report the incident to Michigan Department of Environment, Great Lakes and Energy until Nov. 19, according to documents obtained by the newspaper.

The collapse also caused a long piece of drill rod to become lodged beneath the lake bed, and a piece of the equipment to fall on top of the lake bed.

The tunnel would enclose the Straits of Mackinac's portion of the 66-year-old pipeline, which is also known as Enbridge Line 5. It runs from Superior, Wisconsin to Sarnia, Ontario.

Ryan Duffy, Enbridge spokesman, said the two-months span between the date of the incident and the report were spent determining the best way forward. And now, the company won't be able to retrieve the debris until at least spring 2020.

"We were evaluating ways to go down and get it, and looking at the best way to go forward," Duffy said. "We hoped to do it this season, this year, but it became unsafe with the change in the weather. It would be a dive operation that would be high risk in the cold weather, so we're just going to retrieve it in the spring."

Duffy added that the debris does not pose any inherent safety or environmental risk. But the presence of the debris means that Enbridge is in violation of their boring permit under the Natural Resources Environmental Protection Act.

"The crew had some difficulties retrieving (the rod), so ... the crew and Enbridge made the decision to lean the rod on the lake bottom until it can be retrieved in the spring, and it doesn't pose a threat of interfering with traffic or anything like that."

Joseph Haas, Gaylord District Supervisor for EGLE's Water Division, said the company did not break any rules by waiting to file their initial report. But he adds that the department would liked to have known as soon as it happened.

Opponents of the aging pipeline claim that the line poses an imminent risk of rupture.

Studies suggest that the tunnel would prevent threats to the pipeline's infrastructure and shield the water from oil in the event of rupture, but opponents of the aging pipeline claim that it poses an imminent risk of rupture.

Jennifer McKay, of Tip of the Mitt Watershed Council, has called for the pipeline to be shutdown. She said the incident offers reinforces that the Straits is not a suitable location for the pipeline.

"How can the public be confident that there will not be any additional collapses or problems during drilling of a tunnel if Enbridge can't even bore a hole without it collapsing?" she said in a statement.