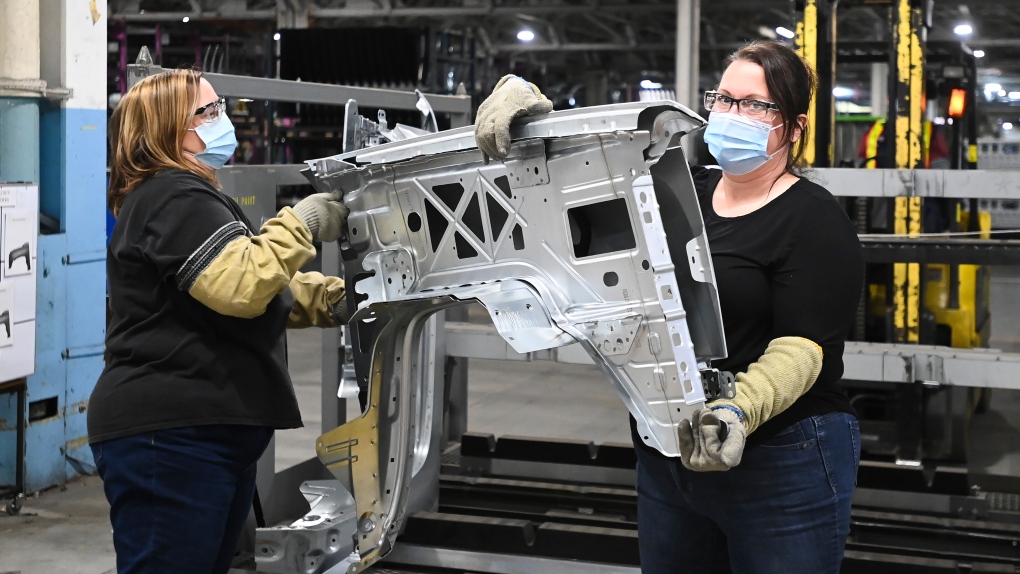 GM workers place vehicle truck fenders on a rack at the General Motors assembly plant during the COVID-19 pandemic in Oshawa, Ont., on Friday, March 19, 2021. THE CANADIAN PRESS/Nathan Denette

OTTAWA -- A shortage of skilled workers is intensifying in Canada, potentially threatening the pace of the economic recovery from the COVID-19 pandemic, and that has policymakers looking at a largely untapped market for new construction workers: Women.

But attracting and retaining women in the skilled trades has long proven difficult, with tradeswomen and advocates citing challenges balancing childcare and on-site work, the stubborn sexism still ingrained in some workplaces, and a lack of opportunities for women to get a foot in the door.

Vanessa Miller was a young single mom when she decided to scrap university for welding. She got her journeyperson ticket and became a rarity in Canada: a woman with her own welding rig, a truck kitted out with all the equipment needed to do big jobs.

"Every time you go to a different job and nobody knows who you are, you have to prove yourself," she said, speaking from her home in Regina, Saskatchewan. "It's still difficult to break into the industry, it's still very male dominated."

Canada, like other developed nations, is facing a shortage of skilled trade workers just as a pandemic stimulus-backed building boom gets underway. At the same, more women than men remain unemployed because of the pandemic, and about 54,000 women have left the labour force since February 2020.

In its latest budget, Canada's Liberal government pledged C$470 million ($373.2 million) to support the hiring of new apprentices for the most in-demand trades. Companies that hire women, Indigenous people and other minority groups get double the funding.

But women working in the trades and union leaders say it will take more than just money to get more women in the trades.

"We're doing the work to mentor tradeswomen, to build our supply of under-represented groups," said Lindsay Amundsen, director of workforce development at Canada's Building Trades Unions. But she said there should be quotas on major projects to ensure women get hired.

Canada has suggested quotas for certain groups - like women and Indigenous people - on major projects that get federal support, but it is up to the provinces to set them, a spokesperson at the infrastructure ministry said.

More than a decade ago, the province of Newfoundland and Labrador realized that efforts to get women more interested in the trades were working, but few were sticking with it.

The province funded the Office to Advance Women Apprentices (OAWA) to connect tradeswomen with employers and also set hiring quotas for women and other under-represented groups, like Indigenous people, on major projects.

By 2017, about 14% of construction tradespeople working in Newfoundland and Labrador were women, far above the national average of 3-4%, though some barriers remain.

When journeyperson millwright Cassandra Whalen landed in remote Voisey's Bay, Labrador for a recent job, she discovered there was no safety equipment in her size on site.

"I needed a respirator, I needed gloves and I needed a harness, none of which they had in size small," she said. "They had to be flown in."

But Whalen loves her work, and says union advocacy has made the industry more inclusive.

One of the unions leading the charge is UA Canada, which pays up to 24 weeks salary to pregnant members unable to work due to safety risks. They also pay a top-up for both men and women who take parental leave after a baby is born.

"I really think it does help with the retention for sure," said Alanna Marklund, a national manager at UAC who is also a journeyperson welder.

But childcare continues to be an issue for many tradeswomen. Several tradeswomen interviewed by Reuters said they depended on family members or spouses to help care for young children.

Maggie Budden, a journeyperson ironworker, ended up taking a job in a bank after her children were born. "Unfortunately with construction you need to travel and I could not do that with my daughters," she said. She now runs the newest branch of OAWA, in Cape Breton.

Daniella Francis was living in Ontario when she started considering the trades, but she couldn't find any programs for women in her province. She ended up moving her entire family to Alberta and is now an apprentice plumber.

"There needs to be more options," she said, adding however: "I would say, as a woman, don't be afraid to go into the trades. Things are changing."