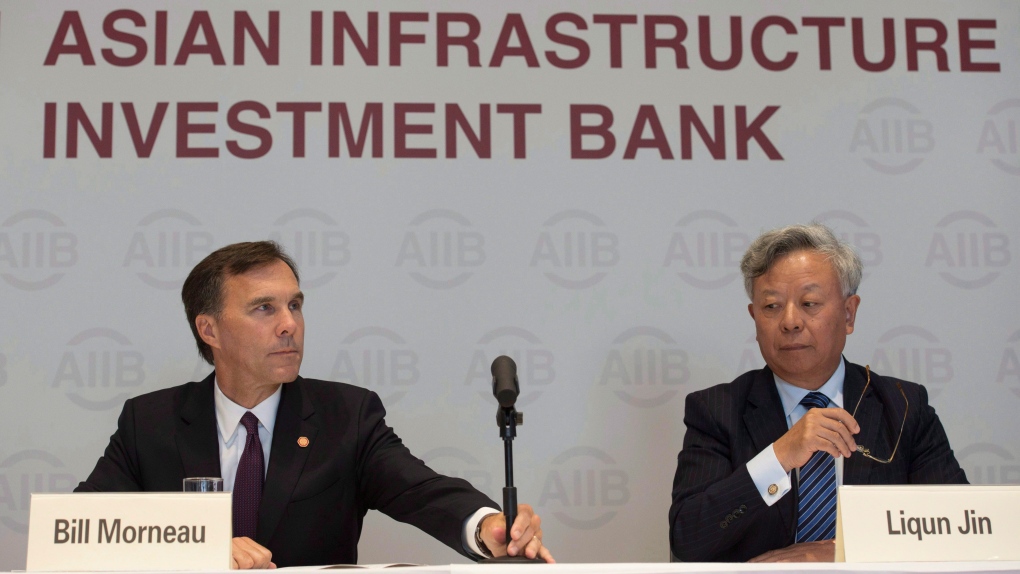 OTTAWA -- Canada has been approved to join a controversial new international infrastructure bank led by China.

The Asian Infrastructure Investment Bank says Canada is among 13 applicants approved for membership in the bank by its board of governors.

The bank says Canada will officially join once it fulfills its domestic requirements and deposits a first instalment of capital.

In the federal budget introduced Wednesday, the Trudeau government earmarked $256 million over five years to join the bank, saying legislation on Canada's membership will be introduced this year.

The bank, which was established by China in 2015, aims to provide infrastructure capital across Asia for projects like transportation, power and telecommunication in places such as Pakistan, Bangladesh and Indonesia.

Canada would be the first North American member of the bank. Australia, the United Kingdom, France, Germany and South Korea were among the 57 founding members.

The United States opposes the institution, warning that it would provide loans to developing countries without requiring any caveats about the environment, labour rights or anti-corruption reforms, as are typically included in loans from the World Bank and International Monetary Fund.

The bank is hailing the addition of the 13 new members.

"The interest in joining AIIB from around the world affirms the rapid progress we have made to establish the bank as an international institution," bank president Jin Liqun said in a statement.

"I am very proud that AIIB now has members from almost every continent and we anticipate further applications being considered by our board of governors later this year."

The bank has already doled out US$1.73 billion and officials have said it plans to loan out $10-15 billion over the next five years.

Finance Minister Bill Morneau has said membership in the bank will create opportunities for Canadian companies and contribute to global economic growth. He reiterated that in his budget on Wednesday.

"Canada's membership at the AIIB will support inclusive, sustainable economic growth in Asia and beyond, by promoting investments in high-quality infrastructure projects, including in transportation and energy," the budget said.