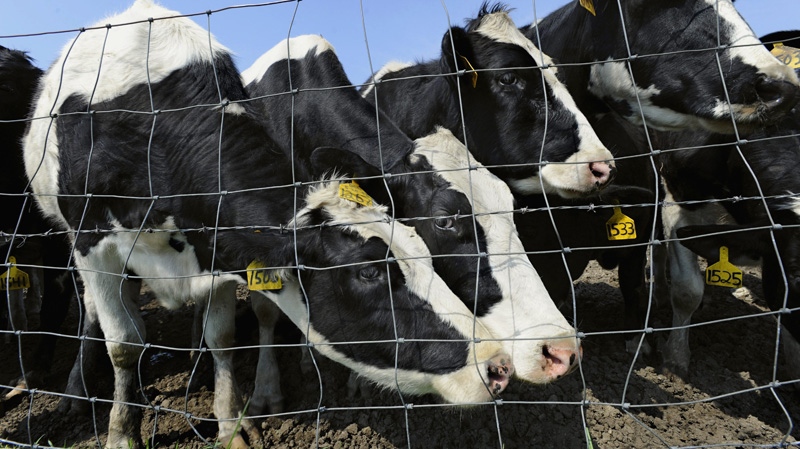 In this May 3, 2011 file photo, beef and dairy cows graze on a farm in Thompson, Conn. (AP Photo/Jessica Hill)

FRESNO, Calif. -- U.S. federal regulators have shut down a central California slaughterhouse after receiving undercover video showing dairy cows -- some unable to walk -- being repeatedly shocked and shot before being slaughtered.

Officials with the U.S. Department of Agriculture, which inspects meat facilities, suspended operations Monday at Central Valley Meat Co. in Hanford, Calif., which slaughters cows when they lose their value as milk producers.

The USDA received hours of videotape Friday from Compassion Over Killing, an animal welfare group, which said its undercover investigator was employed by the slaughterhouse and made the video over a two-week period in June.

"USDA considers inhumane treatment of animals at slaughter facilities to be unacceptable and is conducting a thorough investigation into these allegations," said Justin DeJong, spokesman for the Food Safety Inspection Service.

Four minutes of excerpts the animal welfare group provided to The Associated Press showed cows being prepared for slaughter. One worker appears to be suffocating a cow by standing on its muzzle after a gun that injects a bolt into the animal's head had failed to render it unconscious. In another clip, a cow is still conscious and flailing as a conveyor lifts it by one leg for transport to an area where the animals' throats are slit for blood draining.

"The horror caught on camera is sickening," said Erica Meier, executive director of Compassion Over Killing, based in Washington, D.C. "It's alarming that this is not only a USDA-inspected facility but a supplier to the USDA."

Within hours of seeing the video, the USDA's Office of Inspector General sent investigators who found evidence of "egregious inhumane handling and treatment of livestock."

"FSIS suspended operations at the facility and is prepared to take further action as warranted by the investigation," DeJong said.

The USDA had at least two inspectors stationed at the site, and federal officials, when asked whether there was evidence the inspectors had neglected their duties, said the investigation is ongoing.

Central Valley Meat Co., owned by Brian and Lawrence Coelho, declined to comment on the video, saying company officials had not seen it.

"We were extremely disturbed to be informed by the USDA that ... our plant could not operate based upon a videotape that was provided to the Department by a third party group that alleged inhumane treatment of animals on our property," said a company statement.

The videos show workers pulling downed cows by their tails and kicking them in an apparent attempt to get them to stand and walk to slaughter. Others shoot downed cows in the head over and over as the cows thrash on the ground. In one instance, the video shows workers trying to get cattle to back out of a chute while repeatedly spraying them with water and shocking them.

Veterinarians specializing in humane handling were a part of the USDA's rapid initial inspection that led to the shutdown at Central Valley Meat Co. The USDA told plant officials Sunday that it was withholding inspection marks and "immediately suspending the assignment of inspectors at the facility."

"It's a good sign that the USDA is taking this seriously, but I want to see what comes next," said Meier, adding the video will be posted on the organization's website Tuesday. "The footage clearly speaks for itself, but this is not an isolated incident. Investigation after investigation of these places is revealing cruelty."

The case is reminiscent of a 2008 undercover operation by the Humane Society of the United States at the Hallmark slaughter plant in Chino, Calif., that led to the largest-ever recall of beef and the conviction of two people found to have treated the cows cruelly. In that case, video showed downed cows being prodded with a forklift.

Earlier this year, USDA tests on a dairy cow carcass at a Hanford rendering plant transfer facility showed it was infected with mad cow disease, or bovine spongiform encephalopathy.

Hanford is in the heart of the Central Valley dairy region where there are 1.6 million dairy cows.