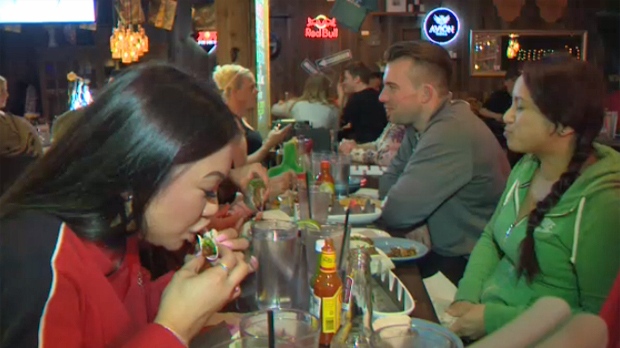 Blanco Cantina uses the phrase online, on its menu and on a billboard outside the business.

A Calgary Tex-Mex eatery is retreating from a legal food fight with a billion-dollar restaurant franchise firm over the phrase “Taco Tuesday.”

Blanco Cantina said on its website that it received a cease and desist notice from TacoTime Canada, a brand operated by a division of MTY Food Group, one of the largest franchisers in Canada’s restaurant industry.

The letter dated Feb. 8, 2018 from Sue Wang, legal counsel for MTY Food Group, instructs Blanco Cantina to “cease any and all use, publication, broadcasting or distribution of material using the ‘Taco Tuesday’ trademark in relation to your restaurant services (and) . . . destroy or remit to MTY for destruction all signs, billboards, leaflets, coupons, labels, packaging, wrapping or other advertisement/publicity material referring to the trademark ‘Taco Tuesday.’”

Wang states in the letter that failure to comply within 15 days may result in legal proceedings.

“Our reaction was complete shock,” Blanco Cantina spokesperson Kate Mitchell told CTV Calgary on Taco Tuesday. “We thought maybe it was a joke.”

Blanco Cantina uses the phrase online, on its menu and on a billboard outside the business.

Calgary-based TacoTime Canada first registered “Taco Tuesday” for use in restaurant services in 1997, according to the Canadian Trademarks Database. The Canadian Intellectual Property Office notes the alliterative phrase has been used in Canada at least as early as 1986.

“We’ve used (Taco Tuesdays) for years at Anejo and at Blanco since we opened in October 2015. We have half-priced tacos every Tuesday,” said Mitchell. “A lot of people use it, and we didn’t realize that it was a trademarked name until receiving this cease and desist on Friday.”

MTY Food Group operates roughly 5,500 locations, according to the company website. While the name MTY may not ring a bell, the company’s stable of eateries, which include Manchu Wok, Mr. Sub, and Mr. Souvlaki, is likely familiar to anyone who has set foot in a mall food court.

Mitchell said she regrets that Blanco Cantina will be forced to crumble under the weight of the TSX-listed giant.

“We are not interested in a legal battle with a billion dollar company,” she said. “We will comply, but we will have some fun doing it.”

The restaurant has launched a tongue-in-cheek online petition to save “Taco Tuesday,” though it admits the campaign is unlikely to make a difference. Its proprietors are crowdsourcing suggestions to rename the indulgent weekly occasion.

“Trademark Tuesday,” “Talk-o-Tuesday,” and “The day of the week when everyone on the planet eats discounted tacos” are among the suggestions thus far.