Canada’s businesses are not using their savings from corporate tax cuts to create jobs, despite government claims to the contrary, according to the Canadian Labour Congress.

The CLC said Tuesday that corporations are able to pay their annual tax share earlier than ever and are hoarding the excess cash.

In its latest report, the CLC said that in 2011, corporations had made enough money to clear their tax obligations by Jan. 30. That was two days earlier than in 2010, the group said.

The payoff date, what the CLC calls “Corporate Tax Freedom Day,” was probably even earlier in 2012, the group said, and could be earlier still in 2013. That’s because both the previous Liberal and current Conservative governments have steadily lowered the corporate tax rate to the 15 per cent it sits at today.

Hassan Yussuff, secretary-treasurer of the CLC, said the latest report refutes Finance Minister Jim Flaherty’s claim that lowering taxes for businesses would result in more jobs and investment in equipment and machinery.

“The reality is that Mr. Flaherty should be as honest as he was last summer when he joined (Bank of Canada Governor) Mark Carney to say that there is a problem in this country: Corporations are sitting on too much cash,” Yussuff told CTV’s Power Play. “They should be spending that money to create jobs and buy new equipment and training workers in this country.”

In its report, the group said the payoff date used to be in late February. But rather than use the excess revenue for innovation and job creation, the companies are building their cash reserves and rewarding executives.

Flaherty dismissed the report when asked about it during question period in the House of Commons Tuesday by NDP finance critic Peggy Nash.

“I understand the (CLC) supports the NDP’s high-tax agenda,” Flaherty said. “But our Conservative government is focused on putting more money in the hands of investors and entrepreneurs and ultimately growing the work force, at which we’ve been incredibly successful.”

Yussuff acknowledged that corporations do need to have cash reserves in the event of an economic downturn. But, he said, in addition to cash hoarding, low tax rates are also impacting government revenue. Yussuff suggested that a bump in the federal tax rate to 18 per cent wouldn’t be enough to scare businesses out of the country, and could “generate far more revenue to help deal with the deficit and the social program needs in the country.”

But John Manley president and CEO of the Canadian Council of Chief Executives, said the report was misleading because it does not factor in provincial tax rates, which hover around 25 per cent.

He said that 90 per cent of the jobs created in Canada since the worst of the economic downturn have been in the private sector.

“It’s not really a good idea for the business community to give its money to the government and hope it spends it wisely, and most Canadians probably think that’s right,” Manley told Power Play.

He acknowledged that “there’s a fair bit of money on the balance sheets, but not abnormally a lot.” But said businesses have to be cautious after the credit squeeze during the worst of the economic downturn. 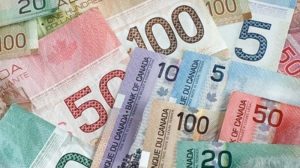 What Did Corporate Tax Cuts Deliver?