Budweiser accused of watering down beer in class-action lawsuits 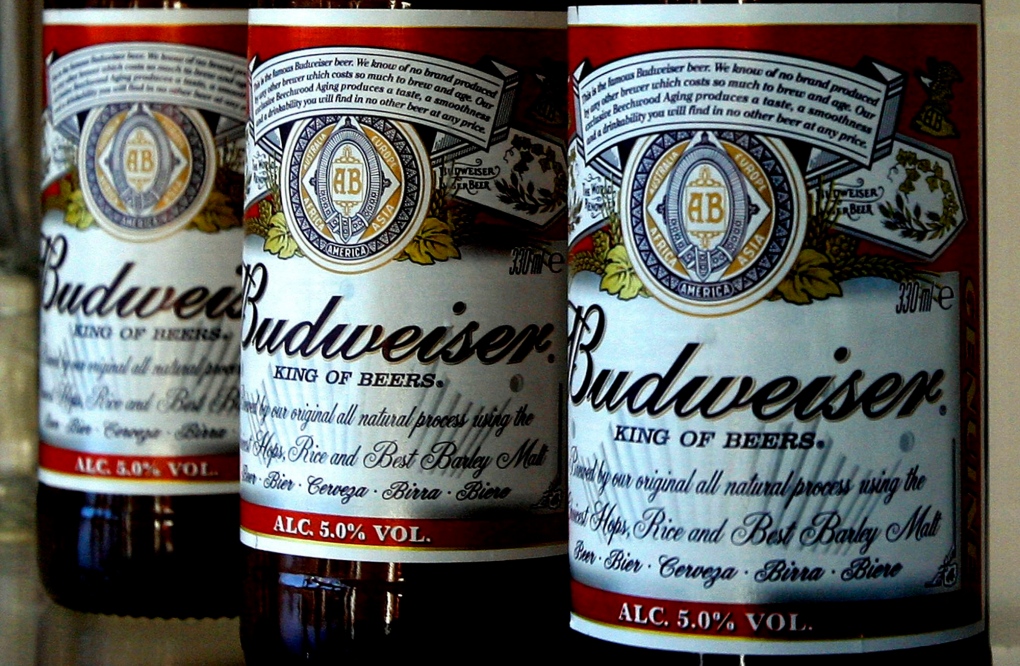 Bottles of Budweiser beer are seen at the Stag Brewery in London in this 2009 file photo. (AP Photo/Kirsty Wigglesworth)

PHILADELPHIA -- Beer lovers across the U.S. have accused Anheuser-Busch of watering down its Budweiser, Michelob and other brands, in class-action suits seeking millions in damages.

The suits, filed in Pennsylvania, California and other states, claim consumers have been cheated out of the alcohol content stated on labels. Budweiser and Michelob each boast of being 5 per cent alcohol, while some "light" versions are said to be just over 4 per cent.

The lawsuits are based on information from former employees at the company's 13 U.S. breweries, some in high-level plant positions, according to lead lawyer Josh Boxer of San Rafael, Calif.

"Our information comes from former employees at Anheuser-Busch, who have informed us that as a matter of corporate practice, all of their products mentioned (in the lawsuit) are watered down," Boxer said. "It's a simple cost-saving measure, and it's very significant."

The excess water is added just before bottling and cuts the stated alcohol content by 3 per cent to 8 per cent, he said.

"Our beers are in full compliance with all alcohol labeling laws. We proudly adhere to the highest standards in brewing our beers, which have made them the best-selling in the U.S. and the world," Peter Kraemer, vice president of brewing and supply, said in a statement.

Anheuser-Busch, based in St. Louis, Mo., merged with InBev in 2008 to form the world's largest alcohol producer, headquartered in Belgium. In 2011, the company produced 10 billion gallons of malt beverages, 3 billion of them in the U.S., and reported $22 billion in profits from that category, the lawsuit said.

According to the lawsuit, the company has sophisticated equipment that measures the alcohol content throughout the brewing process and is accurate to within one-hundredth of a percent. But after the merger, the company increasingly chose to dilute its popular brands of beer, the lawsuit alleged.

"Following the merger, AB vigorously accelerated the deceptive practices described below, sacrificing the quality products once produced by Anheuser-Busch in order to reduce costs," said the lead lawsuit, filed Friday in federal court in San Francisco on behalf of consumers in the lower 48 states.

Companion suits are being filed this week in Pennsylvania, New Jersey and elsewhere. Each seeks at least $5 million in damages.

The named Pennsylvania plaintiffs, Thomas and Gerald Greenberg of Ambler, said they buy six cases of the affected Anheuser-Busch products a month. They did not immediately return a message Tuesday, and Boxer would not elaborate on their purchases except to say the consumer-protection suit does not involve retailers or bar owners.

One of the California plaintiffs, Nina Giampaoli of Sonoma County, said she bought a six-pack of Budweiser every week for the past four years.

"I think it's wrong for huge corporations to lie to their loyal customers - I really feel cheated. No matter what the product is, people should be able to rely on the information companies put on their labels," Giampaoli said in a news release issued by Boxer's law firm.

In a telephone interview with The Associated Press, Boxer said he has evidence to corroborate the former employees' allegations, but stopped short of saying the beers had been independently tested.

"AB (Anheuser-Busch) never intends for the malt beverage to possess the amount of alcohol that is stated on the label. As a result, AB's customers are overcharged for watered-down beer and AB is unjustly enriched by the additional volume it can sell," the lawsuit said.