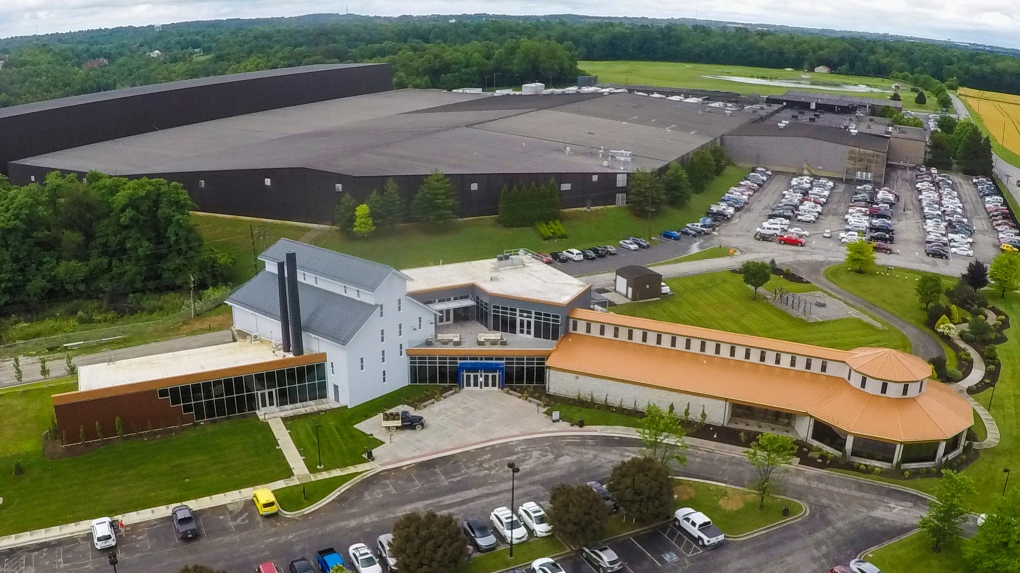 LOUISVILLE, KY. -- With tourists flocking to distilleries, concerns about a pandemic hangover for Kentucky's world-famous bourbon industry are quickly evaporating.

A US$19 million tourist center that Heaven Hill Distillery opened just days ago in the heart of the state's bourbon country is already overflowing -- with reservations filling up quickly to learn about whiskey-making and sample its spirits, including its flagship Evan Williams whiskey.

It's a similar story for the numerous other distilleries in the region that last spring were temporarily closed to visitors due to the COVID-19 pandemic. More than a year later, the businesses are facing such overwhelming demand for tours that one industry official has started encouraging people to call ahead or check tour availability online before pulling off the highway.

Starting last summer, some distilleries began allowing limited numbers of visitors in accordance with virus restrictions. With capacity limits now lifted, the attractions are gearing up for a full resurgence of guests, many from outside Kentucky.

"We were a hot destination before COVID cooled us off considerably," he added. "But now we're getting back to the point where people want to get out, they want to have fun."

"I think next year will be more of a normal year and if this trend continues, I think it will be another record-setting year," he said.

Bourbon is an US$8.6 billion industry in Kentucky, where 95 per cent of the world's supply is crafted, according to the association. About 9.3 million barrels of bourbon were aging in the state last year, or more than two barrels for every person living in Kentucky. And bourbon tourism has become a big business, driven in part by a surge in enthusiasm overseas.

Spirits companies invested huge sums into new or expanded visitors' centers to play up the industry's heritage and allow guests to soak in the sights and smells of bourbon making. Kentucky Bourbon Trail visitors spend, on average, between US$400 to US$1,200 per trip, Gregory said. More than 70 per cent of visitors come from outside Kentucky.

To help visitors plan trips, the organization is promoting a new Bourbon Trail Passport and Field Guide, a 150-page guide to participating distilleries, with cocktail recipes and suggested itineraries.

In Bardstown, where Heaven Hill opened its tourist center, the return of travelers will spin off considerably more spending at restaurants, stores and motels, said Dixie Hibbs, a former mayor.

The picturesque town, about 40 miles (64 kilometers) southeast of Louisville, is so entwined with the industry that the smell of locally crafted bourbon wafts into downtown.

"Most people will tell you that's the smell of money," Hibbs said.

While most distilleries have reopened for tours, some still aren't allowing visitors into "front line" areas where bourbon is produced, Gregory said. For guests allowed into production areas, chances are they'll be asked to wear a mask for that phase of the tour, he said.

Some distilleries remain closed to tours. That includes industry giant Jim Beam, which is overhauling its visitor experience with plans to reopen in the fall at its flagship distilling operation in Clermont, said company spokesperson Emily Bryson York.

At Maker's Mark, both tour sizes and the number of tours will increase starting in mid-July at its distillery in Loretto, said Rob Samuels, the brand's managing director.

For visitors unable to join a tour, Maker's Mark and other distilleries offer tastings of their products. They can order cocktails or perhaps a meal if the distillery has a restaurant. And they can walk the distillery grounds and shop at the gift shop.

If a larger distillery is booked, visitors often can check out a smaller distillery nearby, Gregory said. Kentucky now boasts distilleries in 32 of its 120 counties, with more than a dozen others recently announced or under construction, he said.

Like his predecessors, Gov. Andy Beshear has become a fixture at events toasting the bourbon industry's growth. At Monday's opening of the Heaven Hill Bourbon Experience, Beshear said the visitor center gives people "one more great reason to visit Kentucky and experience the Kentucky Bourbon Trail."

The new tourist center is three times larger than Heaven Hill's previous Bardstown visitors' center and is part of a US$125 million investment by Heaven Hill that includes new barrel warehousing, bottling line and equipment upgrades.

"We are extremely pleased to be welcoming fans and visitors back to bourbon country to see, taste and learn about America's Native Spirit in a new way," he said.