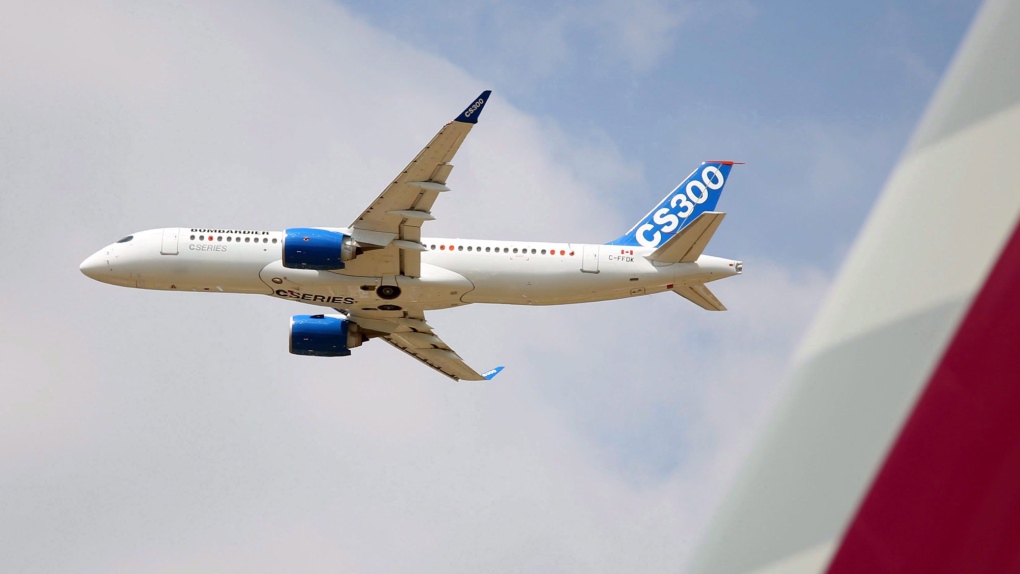 The Bombardier CS300 performs its demonstration flight at the Paris Air Show in Le Bourget, north of Paris, Wednesday June 17, 2015. Bombardier Inc. has signed a letter of intent to sell up to 24 CS300 aircraft to EgyptAir Holding Co. THE CANADIAN PRESS/AP-Remy de la Mauviniere

DORVAL, Que. -- Bombardier Inc. brushed off any concerns that tensions between the federal government and China as well as with Saudi Arabia pose a threat to business jet sales, on which the plane and train maker is staking its financial turnaround.

Relations between Ottawa and Beijing have been strained since Canadian authorities detained Huawei Technologies Co.'s chief financial officer Meng Wanzhou in Vancouver on Dec. 1, which preceded the detention of three Canadians in China in less than one week.

Bombardier, which celebrated the entry into service of its US$73-million Global 7500 business jet Thursday, said the product line is resistant to diplomatic and market fluctuations.

"If we see one region going through geopolitical slowdowns, there are usually other regions that are either coming up or experiencing booms where we can profit," said spokesman Mark Masluch.

Michel Ouellette, who heads Bombardier's Global 7500 program -- sold out into 2022 -- said that customers who signed up many years ago want their aircraft.

The Global 7500, along with the new Global 5500 and 6500, come partly as a response to products from rival business jet manufacturer Gulfstream Aerospace Corp. as demand for the larger jetliners keeps rising.

Bombardier delivered 138 of the 677 business jets shipped by the industry in 2017, securing 20 per cent of the global market, according to the General Aviation Manufacturers Association. That number topped Gulfstream's 120 business jet deliveries.

Measured by revenue, however, Gulfstream's market share is higher. The Georgia-based company obtained US$6.56 billion of the US$20.2 billion in business jet sales. Bombardier raked in US$5.14 billion, according to the association.

"Gulfstream and Bombardier duke it out at the top of the market," said Ernie Arvai, president of commercial aviation consultancy AirInsight Group.

"If you've got enough money for one of these very high-end business jets, you've probably got the ego to go with it, and the need to have the latest and greatest. So it's a matter of ego with some of the billionaire buyers, who are a market for this aircraft."

Bombardier is aiming for US$8.5 billion in annual revenues by 2020, driven largely by Global 7500 sales -- a major bump from last year's US$5 billion. The business jet backlog now totals US$14.3 billion, Masluch said.

Despite the manufacturing ramp-up that implies, some of the 3,000 workers Bombardier announced it will lay off over the next year and a half will be cut from the business jet unit, Ouellette said.

The company is "still evaluating" where exactly those cuts will occur, he added.

Karl Moore, an associate professor at McGill University's business school, said the company's focus on business jets and trains positions it well to handle changes in the economy.

Governments like to spend on rail infrastructure during recessions to create jobs while business jets "should really rock and roll and make a lot of profit for Bombardier," Moore said.

Chinese buyers looking to keep their distance from Canadian business jet makers may few alternatives for large business aircraft other than Gulfstream, a company based in the U.S., with which Beijing has even greater tensions.