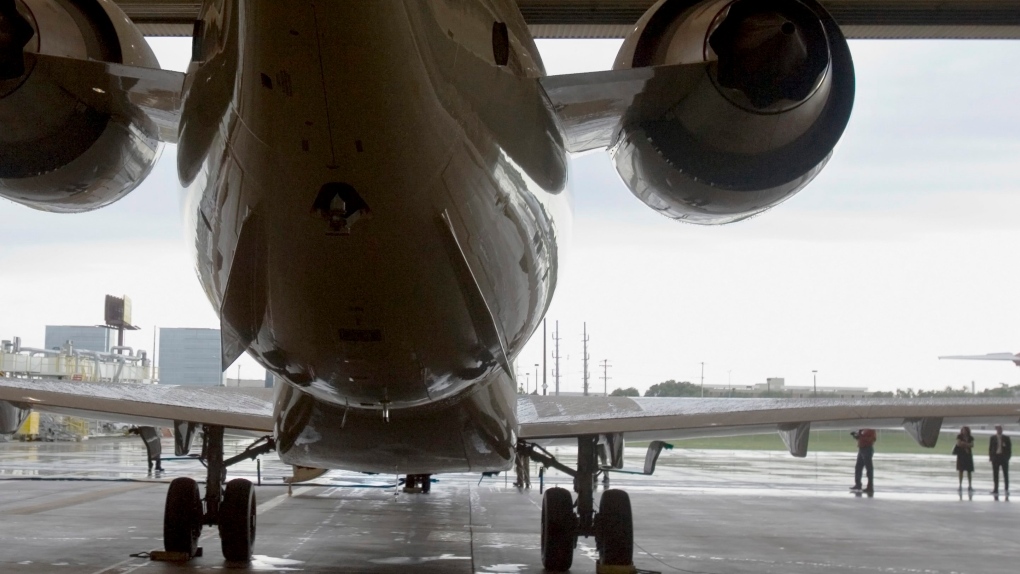 MONTREAL -- Bombardier Inc. and Mitsubishi Heavy Industries Ltd. are in talks regarding the possible sale of Bombardier's CRJ regional jet business, a deal that would mark the plane-and-train maker's exit from commercial aviation and shift the industry landscape.

The Japanese company cautioned that no decision has been made on any possible transaction.

"If ever any such decision is made, we will disclose as necessary in accordance with the applicable stock exchange regulations," Mitsubishi said in a brief statement.

Bombardier, which would not disclose details of the talks, said recently it would explore strategic options for the CRJ program.

"Before any agreement can be reached further review and analysis by Bombardier management and approval by Bombardier's board of directors are required," the Montreal-based company said.

It added that Mitsubishi must also complete its due diligence review and its own analysis and approval process, which are outside of Bombardier's control.

Earlier this year, Bombardier chief executive Alain Bellemare said the continuation of its regional jet program hinged on whether the company could fill up the CRJ's partly blank order book.

Once a cash cow for the Montreal-based company, the CRJ now struggles to generate profits. For the past five years, Embraer SA's E175 narrow-body aircraft has dominated the U.S. market, where the majority of regional jets are sold.

Bombardier is placing renewed focus on its business jets -- such as the Global 7500 -- whose robust sales and high earnings margin in 2018 propelled the company to its first annual profit in five years. It sold a majority stake in its C Series commercial aircraft program last year to Airbus, which rebranded it the Airbus A220.

"This would be the last remaining sale within the commercial aircraft segment, allowing Bombardier to divert focus on the ramp-up of the Global 7500 and on the transportation division," said RBC Dominion Securities analyst Walter Spracklin of the CRJ talks.

The sale of Bombardier's Q Series to the B.C.-based Longview Aviation Capital Corp. closed Monday at $250 million after liabilities, fees and closing adjustments.

Spracklin said Mitsubishi, which has been developing its own regional jet program that has been plagued by delays, is a "natural buyer," giving the company a chance "to learn from the widely successful CRJ regional jet."

The CRJ brings in about $1 billion in revenue for Bombardier, and roughly breaks even on earnings before interest, tax, depreciation and amortization, he said.

Mitsubishi likely sees major market potential in Asia, where regulations that require carriers to operate at least 25 regional aircraft before graduating to larger planes would make the CRJ a stepping stone for the company, said analyst Benoit Poirier of Desjardins Securities.

North America also holds promise, with the CRJ and Embraer's E-Jet family the only two programs that satisfy contract agreements between major airlines and pilot unions limiting the number and size of aircraft that may be used by a carrier's regional unit, Poirier said.

"Furthermore, a large number of former Bombardier employees currently work on the MRJ program, which would help facilitate a more seamless transition for the CRJ to a new owner," noted National Bank of Canada analyst Cameron Doerksen.

He placed the sum-of-the parts valuation of Bombardier's commercial aircraft unit -- now just the CRJ -- at $121 million, but said it could be worth more than the newly sold Q400 line given the beefy after-market business furnished by the CRJ's global proliferation.

Doerksen pegged a potential sale price at between $300 million and $500 million.

Bombardier could use the cash. Two major contracts in Ontario -- for Toronto Transit Commission streetcars and Metrolinx Go Train rail cars -- are slated to halt at the end of the year, threatening to reduce its Thunder Bay plant's roughly 1,100 workers to a skeleton staff of 50, said Unifor Local 1075 president Dominic Pasqualino.

"I don't ever remember two contracts ending at the same time," said Pasqualino, who has worked at the plant since 1976, minus a seven-year gap. "That's unprecedented...The first quarter of 2020 is going to be devastating for us."

Ahead of a plant tour Wednesday morning, MPP Greg Rickford said Metrolinx has extended an offer for 36 additional rail cars to Bombardier. The regional transit agency has also given Bombardier the option to slow down production of the 63 remaining rail cars slated for completion by year's end, Pasqualino said.

"I'm very afraid, though, that that's not going to be enough to prevent major layoffs here," said Pasqualino.

Bombardier spokesman Kaven Delarosbil said the offer is "welcome" but not enough to keep the plant in operation.