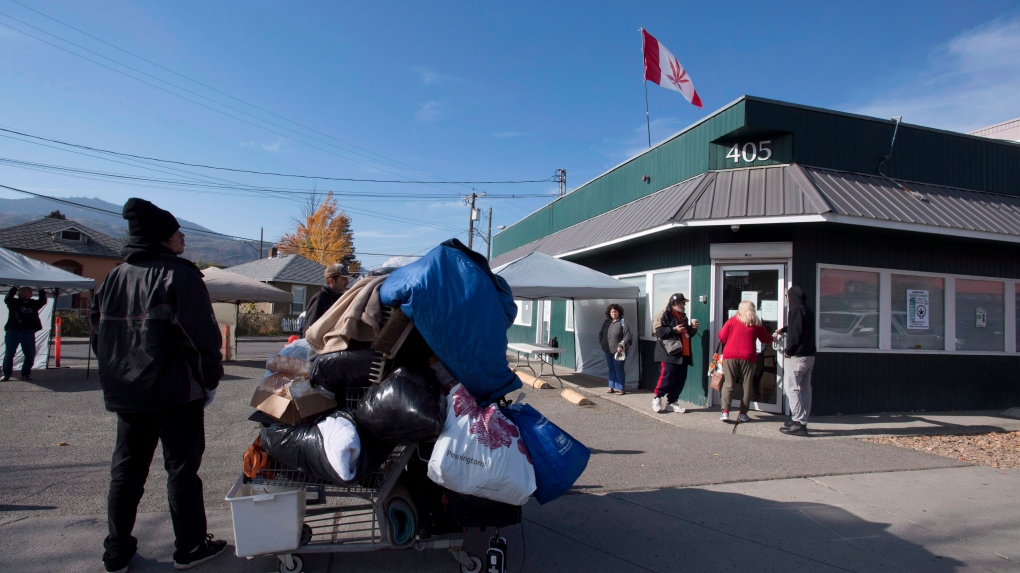 KAMLOOPS, B.C. -- A short drive away from British Columbia's first and only legal marijuana store, Bill Semeniuk inhaled deeply from a joint outside an illegal cannabis dispensary.

The dispensary, Canadian Safe Cannabis Services, has been open in Kamloops for the better part of a decade, and Semeniuk doesn't plan to switch to the swanky government-run shop -- regardless of its legality.

"This man deserves my business. I'm loyal to him because of the fact that he was willing to sacrifice going to jail, perhaps, for providing medical marijuana to a lot of people who consider it their medicine," he said.

The owner of the dispensary declined comment, but his outlet was among those illegal pot shops that remained open across Canada on Wednesday, despite not holding the appropriate licences. Advocates say the black market will continue to thrive until small retail shops and craft growers are included in the regime.

Canadian Safe Cannabis Services held a legalization celebration on Wednesday with a barbecue and music. A poster outside the building proclaimed, "Get high legally. Everyone 19 (years) or over welcome."

The only legal weed that's for sale in the province sits inside the BC Cannabis Store down the street or it can be ordered online. Public Safety Minister Mike Farnworth said there are 173 retail applications being considered and he advised illegal stores to shut down until they are licensed.

It's an ironic situation for a province long renowned for the quality of its bud and for cities that have taken a laissez-faire attitude toward storefront sales. Illegal dispensaries in Vancouver and Victoria also kept their doors open on Wednesday.

Semeniuk, 67, said he is a retired labourer with arthritis and lives on a tight pension. He said the Kamloops dispensary allows him to buy small amounts with what little money he has.

"There'll be no government store that'll let you say, 'Please, can I pay you tomorrow?' " he added.

Inside the gleaming BC Cannabis Store, some 92 products are for sale from 40 licensed producers, but only about seven per cent is grown inside the province. Small nuggets of bud are displayed in clear "smell jars," but otherwise no products, logos or branding are visible, in line with Health Canada regulations.

Many different locations are being considered for future government-run stores, said Kevin Satterfield, director of cannabis store operations for the BC Liquor Distribution Branch.

"Kamloops just seemed to be the right place at the right time, where they had the zoning in place, they had a store location that was perfect for what we wanted to do," he said.

B.C. is not the province with the worst access to legal weed. Ontario won't have any brick-and-mortar stores until next year. Newfoundland and Labrador and New Brunswick have about 20 stores each.

"It's not fair to expect the government to deliver everything perfectly Day 1 when this is a huge transition," said Ian Dawkins, president of the Cannabis Commerce Association of Canada.

"But let's be realistic, these (illegal) retailers were very sophisticated retail enterprises in line with what you would see in a place like Colorado and Washington. ... All of that sophistication is about to be blown out of the window by a tidal wave of Budweiser-grade cannabis."

It's not only dispensaries that feel shut out of the legal market, he added, as small-scale growers are still waiting for the federal government to open an application portal for micro-cultivator licences.

Dawkins said he doesn't need to hypothesize about what will happen to the black market in Canada. He said he just needs to look at Washington state, where less-regulated medical dispensaries are more popular than highly restricted recreational stores five years after legalization.

"What happened at the very beginning of what they did is exactly what we're doing in Canada," he said.

"If you create a regulated environment and then leave an unregulated competitor, which one is going to be cheaper and better?"

Provinces raked in revenue on day one of cannabis sales

Cannabis beer? Pot-brewed beverage could be the future of consumables

First legal purchase of cannabis made in Newfoundland and Labrador

Winnipeg, Ontario police hand out tickets for cannabis in vehicles

What does cannabis cost across Canada?