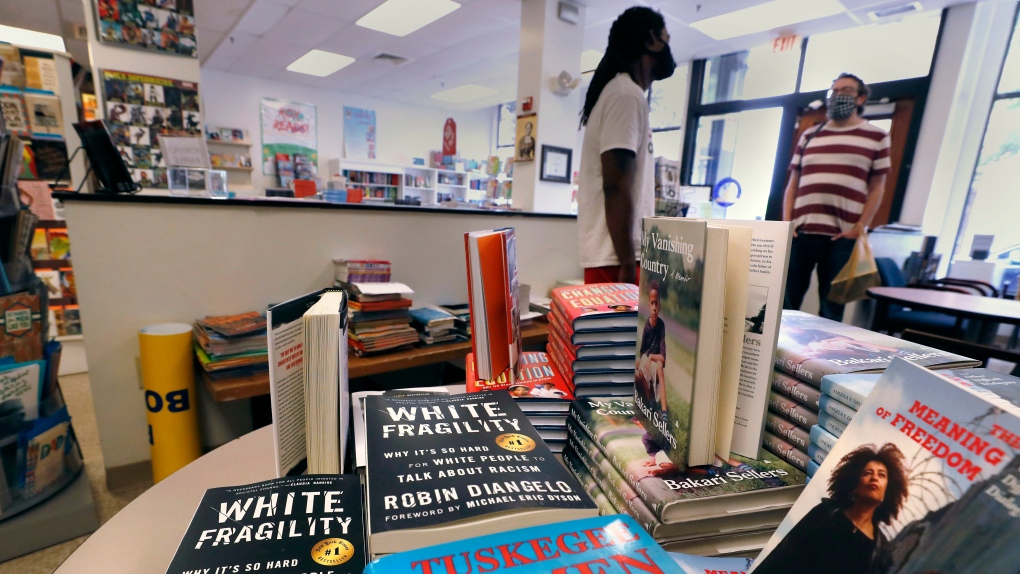 In this Wednesday, June 24, 2020, photograph, books are displayed, including "The Tuskegee Airmen," and "White Fragility," at the Black-owned Frugal Bookstore in the Roxbury neighborhood of Boston. (AP Photo/Charles Krupa)

BOSTON -- When Mahdi Hashemian was looking for a bicycle for his 7-year-old daughter Zeynab last week, the Cambridge, Mass., resident decided to skip his local cycle shops in favour of a Black-owned one a few miles away in Boston's Dorchester neighbourhood.

At Spokehouse, a bike shop with "Black Lives Matter" painted in large bold letters outside, the pair picked out a simple, white-colored model and had training wheels and a white basket for its handlebars installed.

Hashemian, who is set to earn his doctorate from MIT, said he's been reminded in recent weeks of the outpouring of support he felt from the campus community when U.S. President Donald Trump imposed a ban on travellers from Muslim majority countries in 2017, including his native Iran.

"It seems small," he said of his bike purchase, "but a little show of support can mean a lot."

As the May killing of George Floyd by a white police officer in Minneapolis has fueled a worldwide outcry against racism and police brutality, many on social media are encouraging people to spend their money at Black-owned businesses. Lists of local retailers, artisans and manufacturers have been circulating on Instagram, Facebook and Twitter, helping Black-owned businesses raise their profile at a time when the coronavirus pandemic has ravaged the economy.

According to Google, searches for "Black owned businesses near me" reached an all-time high last month in the U.S. Yelp has also made it easier for customers to search for Black-owned establishments on the restaurant review site, and Uber Eats says it'll waive delivery fees for purchases from Black-owned restaurants through the end of the year.

"It's great seeing people realize that where they shop can be another form of activism, that it's a way to put your money where your mouth is," said Randy Williams, founder of Talley & Twine, a Black-owned watch company in Portsmouth, Virginia. "You're helping Black businesses become self-sustaining, and that helps the whole ecosystem."

Sales at Talley & Twine these past few months are up more than 300 per cent from the same period last year, partly because more people are shopping online during the pandemic, he said. But the company was also recently mentioned on a number of social media lists of Black-owned businesses, and its Juneteenth-themed watch sold out before the June 19 holiday commemorating the emancipation of enslaved African Americans, Williams said.

In Los Angeles, cupcake sales and shipping orders on other sweets are up at Southern Girl Desserts after it was also mentioned on social media lists, said Catarah Coleman, co-owner of the bakery in the city's Baldwin Hills neighbourhood.

"It's not nearly the level of business we had before the virus, but it's something," she said. "If we only depended on foot traffic and folks just stayed in their own neighbourhoods, I'm not sure we'd be able to keep going."

At Slade's Bar and Grill in Boston's historically Black Roxbury neighbourhood, online gift card purchases and take-out orders are up significantly as the long running soul food and live music venue -- which boasted Malcolm X, Muhammad Ali and Martin Luther King, Jr. as patrons in its heyday -- is just starting to reopen after shuttering during the pandemic, said Shawn Hunter, the managing partner.

"We're definitely seeing white customers and customers from outside the neighbourhood that we would probably have never seen before," Hunter said.

In nearby Dorchester, Kerri Thibodeau said she drove about half an hour from suburban Stoughton to shop at Pure Oasis, the state's lone Black-owned retail marijuana shop and one of the few in the nation.

The 35-year-old mother of two, who is white, said there's a marijuana shop about five minutes from her house but she decided to support Pure Oasis after hearing that more than US$100,000 worth of marijuana products were stolen from the shop during a large Black Lives Matter protest through Boston last month.

"We really need to come together and show that it doesn't matter the colour of our skin," Thibodeau said after buying some marijuana flower and pre-rolled joints last week.

But the business boon hasn't been without growing pains for some companies. Black-owned bookstores have struggled to keep up with a surge in orders, many of them for a handful of sold-out titles on race relations.

In Boston, the owners of Frugal Bookstore, the city's only Black-owned bookshop, say customers are already seeking to cancel orders and complaining about delays and poor customer service. The Roxbury shop, which raised more than $40,000 through an earlier social media campaign to help it weather the economic downturn, said in a note to customers that went viral last week that 75 per cent of the more than 20,000 purchases it's received are for the same 10 books.

At Spokehouse, the Boston bike shop, owner Noah Hicks hopes the interest isn't a passing fad and that it leads to more concrete efforts to address the challenges facing Black entrepreneurs, including access to capital.

Hicks said his nearly five-year-old shop's sales have tripled this month, compared to last June, in part because bike shops are enjoying brisk business during the pandemic.

The shop also received about $16,000 in donations after it was robbed during last month's unrest, though Hicks ended up donating about half to efforts benefiting the local Black community, including covering the costs for a "Ride for Black Lives," a cycling rally in Boston this past weekend.

"People being intentional about their economic purchases is refreshing," he said. "But we also want them to help tear down the systems that make it hard for us, not just spend their dollars with us."