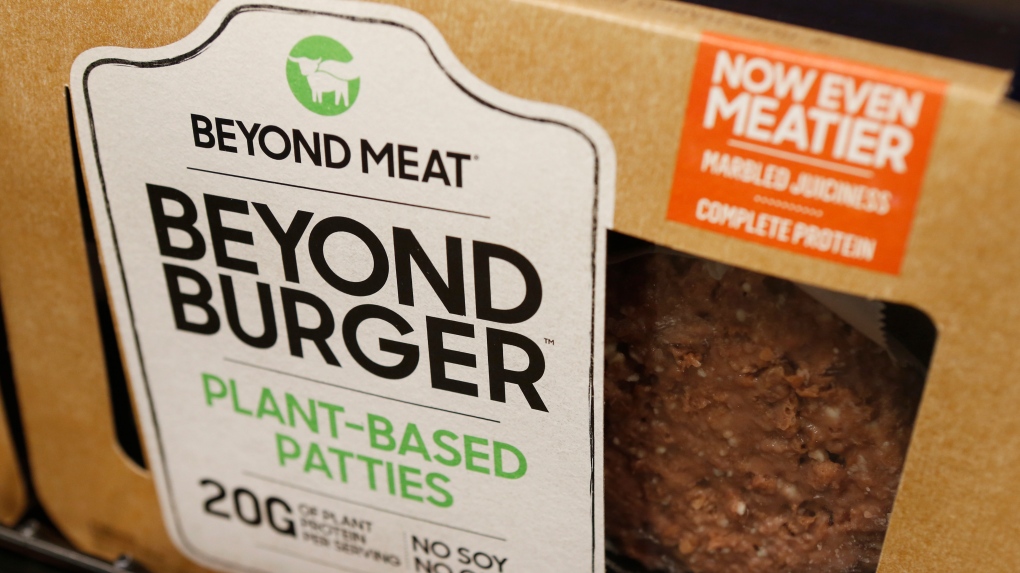 In this June 27, 2019, file photo a meatless burger patty called Beyond Burger made by Beyond Meat is displayed at a grocery store in Richmond, Va. Beyond Meat reports financial earns Monday, Oct. 28. (AP Photo/Steve Helber, File)

NEW YORK -- Beyond Meat is facing a growing field of competitors but on Monday it raised its sales forecast for the year citing its leading role a new wave of vegetarian products intended to more closely mimic meat.

The El Segundo, California, company noted the multiple fast-food chains offering its patties made with pea protein and other ingredients, including Dunkin' Donuts and Carl's Jr. It said McDonald's also recently announced a test of a Beyond Meat burger in Canada.

"I have every expectation that this test will result in more work with McDonald's," CEO Ethan Brown said during a call with financial analysts Monday.

The upbeat sales forecast comes as Beyond Meat and rival Impossible Foods are facing more competition, including from food industry giants like Nestle and Tyson that are also looking to tap into the demand for plant-based options. It's also not yet clear how much the popularity of such meat alternatives will grow or how long the trend will last.

Tim Hortons, for example, recently said it would not move forward nationally in Canada with a test of Beyond Meat patties. But Brown said that decision is "inconsequential" to Beyond Meat's growth and that the success of its products in restaurants and fast-food chains depends on whether they're clearly marketed.

Other chains have reported better early results. Earlier Monday, Burger King said the Impossible Whopper it began offering nationally in August helped bring in new customers. The fast-food chain didn't provide details on how much the burger contributed to U.S. sales, but said it sees momentum for continued growth for plant-based options.

Burger King and Tim Hortons are both owned by Restaurant Brands International.

In supermarkets, Beyond Meat said it is not seeing less shelf space for its products even as other options have popped up. The company said grocers are simply devoting more overall space to plant-based options. It said its repeat purchase rate in supermarkets is around 45%.

For three months ending Sept. 28, Beyond Meat's sales more than tripled to $92 million from the year-ago period and its net income was $4.1 million, marking its first quarterly profit. The company, which went public in May, said it now expects revenue of $265 million to $275 million for the year. It previously forecast sales of more than $240 million.

Beyond Meat Inc.'s stock nevertheless tumbled more than 9% to $95.70 in after-hours trading. The company noted its early investors are now able to sell their shares. It also announced that board member Gregory Bohlen, co-founder of a venture capital firm, was stepping down, shrinking the size of its board to 9 members.