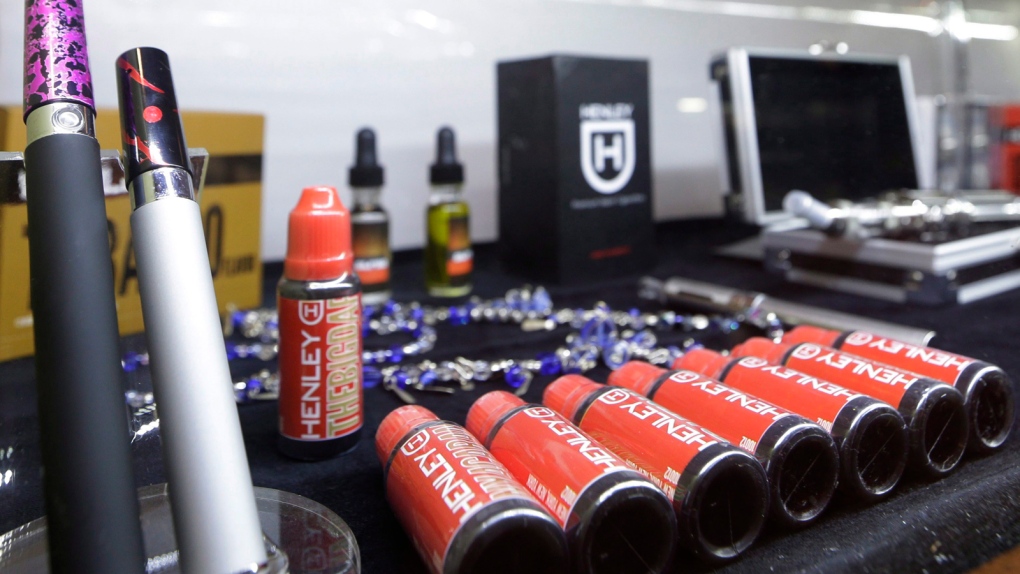 E-cigarettes and liquid nicotine solutions are displayed at the Henley Vaporium in the Soho neighborhood of New York, Feb. 20, 2014. (AP / Frank Franklin II).

RICHMOND, Va. -- Owners of brands geared toward children of all ages are battling to keep notable names like Thin Mint, Tootsie Roll and Cinnamon Toast Crunch off the flavoured nicotine used in electronic cigarettes.

General Mills Inc., the Girl Scouts of the USA and Tootsie Roll Industries Inc. are among several companies that have sent cease-and-desist letters to makers of the liquid nicotine demanding they stop using the brands and may take further legal action if necessary. They want to make sure their brands aren't being used to sell an addictive drug or make it appealing to to children.

The actions highlight the debate about the array of flavours available for the battery-powered devices that heat a liquid nicotine solution, creating vapour that users inhale. The Food and Drug Administration last month proposed regulating electronic cigarettes but didn't immediately ban on fruit or candy flavours, which are barred for use in regular cigarettes because of the worry that the flavours are used to appeal to children.

It's growing pains for the industry that reached nearly $2 billion in sales last year in the face of looming regulation. E-cigarette users say the devices address both the addictive and behavioural aspects of smoking without the thousands of chemicals found in regular cigarettes.

There are about 1,500 e-liquid makers in the U.S. and countless others abroad selling vials of nicotine from traditional tobacco to cherry cola on the Internet and in retail stores, often featuring photos of the popular treats. Using the brand name like Thin Mint or Fireball conjures up a very specific flavour in buyers' minds, in a way that just "mint chocolate" or "cinnamon" doesn't.

"Using the Thin Mint name -- which is synonymous with Girl Scouts and everything we do to enrich the lives of girls -- to market e-cigarettes to youth is deceitful and shameless," Girl Scouts spokeswoman Kelly Parisi said in a statement.

The issue of illegally using well-known brands on e-cigarette products isn't new for some. For a couple of years, cigarette makers R.J. Reynolds Tobacco and Philip Morris USA have fought legal battles with websites selling e-cigarette liquid capitalizing on their Camel and Marlboro brand names and imagery. The companies have since released their own e-cigarettes but without using their top-selling brand names.

"It's the age-old problem with an emerging market," said Linc Williams, board member of the American E-liquid Manufacturing Standards Association and an executive at NicVape Inc., which produces liquid nicotine. "As companies goes through their maturity process of going from being a wild entrepreneur to starting to establish real corporate ethics and product stewardship, it's something that we're going to continue to see."

Williams said his company is renaming many of its liquids to names that won't be associated with well-known brands. Some companies demanded NicVape stop using brand names such as Junior Mints on their liquid nicotine. In other cases, the company is taking proactive steps to removing imagery and names like gummy bear that could be appealing to children.

"Unfortunately it's not going to change unless companies come in and assert their intellectual property," he said.

And that's what companies are starting to do more often as the industry has rocketed from thousands of users in 2006 to several million worldwide, bringing the issue to the forefront.

"We're family oriented. A lot of kids eat our products, we have many adults also, but our big concern is we have to protect the trademark," said Ellen Gordon, president and chief operating officer of Tootsie Roll Industries Inc. "When you have well-known trademarks, one of your responsibilities is to protect (them) because it's been such a big investment over the years."