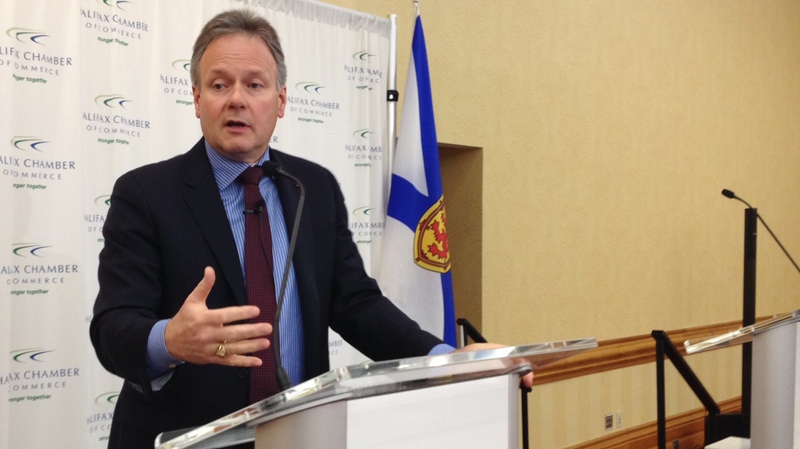 "The global economy may not be just suffering through a hangover from the financial crisis," he said in a speech to the Halifax Chamber of Commerce. "There are other, longer-term forces at work as well."

He said some analysts have suggested the country may be facing a long period of weak economic growth.

"One specific consequence would be that even extraordinarily low policy interest rates could prove to be less stimulative than in normal circumstances," Poloz said.

Soon after he spoke, the Canadian dollar tumbled two-thirds of a cent against the U.S. dollar, dropping below the 90-cent mark. The loonie ended the day down 0.68 of a cent at 89.79 cents U.S.

After his speech, Poloz said the recent weakness in the loonie hasn't had much of an impact on Canadian exports, which tend to benefit from a slide in the dollar.

"To date, I've not seen anything that suggests we've actually had a reaction to that," he told a news conference. "It's early days ... It's not expected to be the big thing that causes our trade performance to change. I think the big thing is the U.S. recovery."

As well, the governor said he wouldn't rule out lowering rates even more if economic performance continued to lag.

"No, I cannot," he told reporters.

"Given the risk that we have identified and the way those risks are expected to play out, we think interest rates are at the right place ... If the balance of risks were to shift ... then we would need to reconsider that balance of risks and our position on it."

The Bank of Canada's policy interest rate has been at one per cent since September 2010.

Poloz noted the baby boom generation -- in Canada and around the developed world -- is entering retirement age.

What is making the situation worse in terms of growth, says Poloz, is that boomers in the developed world have been putting their money into real estate rather than investments that can stimulate the economy.

"Now that that (demographic) bulge begins its inevitable exit from the workforce, that upward movement (in the economy) gets reversed," Poloz told reporters.

"It's just to say that potential output for the world, and indeed for Canada, is not some mechanical straight line. It is something that gradually moves around because of these fundamental changes."

Poloz said the first months of this year have shown less growth than he expected.

"We will not be alone in this, that's for certain -- nor are the forces really Canadian, they're global." he said after his speech.

However, Poloz said he still believes growth will be above the so-called two per cent potential and approach 2.5 per cent in both 2014 and 2015 -- as the Bank of Canada said in its January forecast.

But he has left some room to trim that forecast in next month's monetary policy report, noting that some indicators are suggesting the first quarter ending March 31 may be weaker than expected.

"Although we continue to expect above-trend growth in Canada this year and next, the recent data suggest that the first quarter will be on the soft side," Poloz said in his speech. "This mostly seems attributable to unusual weather, but it bears deeper analysis."

Several economists have recently downgraded their forecasts for the year to the low two-per-cent range on the premise that the export sector will take longer to recover and the housing market is slowing.

Overall, Poloz said, while the global outlook remains problematic, it is healing and the long-expected improvement in the U.S. economy will eventually lift the Canadian boat as well.

"This will inevitably lead to more growth in Canadian exports and, with the reduction in uncertainty that comes with that, more investment in Canada's economic capacity, including creating more companies -- and the much-anticipated rotation in growth."

That has been Poloz's outlook since he took charge of the central bank last summer, but the gist of his Halifax address is that the return to normal, in terms of growth and interest rates, is still a ways off.