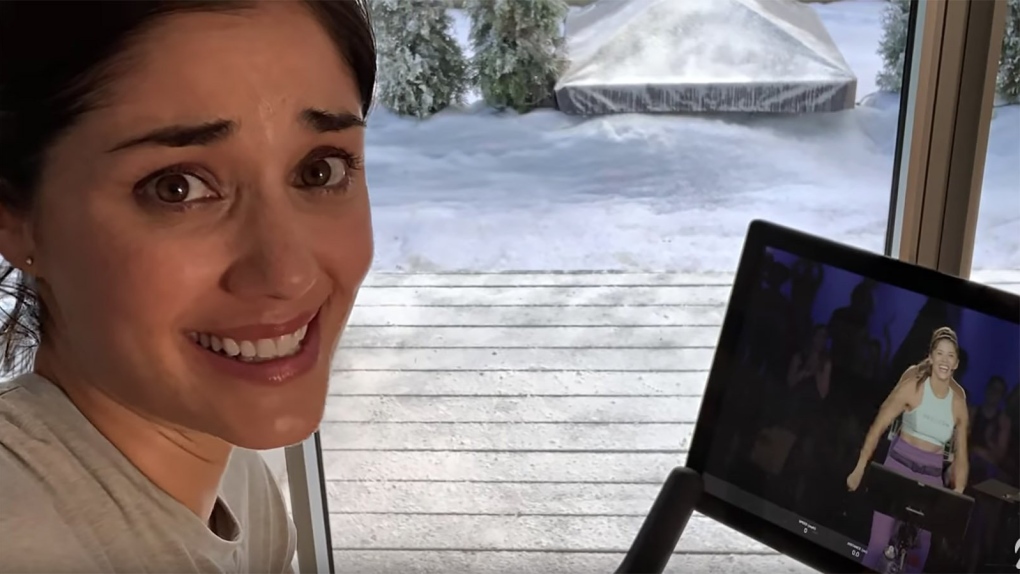 Peloton, the indoor bike start-up, released a new holiday ad that in another time may not have made a dent in the cultural conversation. But this is 2019, and once the internet found the ad and pulled at its seams, there was no turning back. (Peloton)

A controversial ad for Peloton Interactive's expensive stationary bike is unlikely to dampen the company's holiday sales, and may actually boost them thanks to increased publicity, experts say.

"I would actually say it's going to have a positive affect on the company's line," said David Soberman, a professor of marketing at the University of Toronto's Rotman School of Management, speaking of Peloton's Christmas ad.

The New York-city based company best known for its stationary bike offers a "basics package" which costs $2,950 for the bike, warranty, delivery and set up, according to its website. Shoes, accessories and a monthly membership that offers live classes via a video feed cost extra.

The advertisement, which was released in November but went viral on social media this month, depicts a husband giving his wife a Peloton bike for Christmas. She proceeds to record her exercise journey over the course of a year -- first hesitantly joining a live class through the screen on her bike and eventually starting to cycle consistently. At the end, the couple sit on a couch watching a video the wife made of her journey, which concludes: "A year ago, I didn't realize how much this would change me. Thank you."

Critics slammed the ad as sexist, claiming the husband's gift of an exercise machine insinuates that his wife is out of shape.

The video received about 20,000 downvotes and 16,000 thumbs up on Peloton's YouTube channel. Comments under the video were turned off. The company did not immediately respond to a request for comment.

Soberman said it's not a bad ad, though it fails to show the true value of the product by not demonstrating clearly what difference it made in the woman's life over the course of the year.

But it doesn't strike Soberman as offensive.

"I think one of the things that actually occurs in social media is that you can get a reaction from people who are not necessarily in your target market," he said, arguing Peloton's target demographic -- intense exercise buffs -- won't find the spot problematic, but will like it.

This group will recognize fitness isn't just about appearance and weight, he said, but can be measured on many other seemingly invisible metrics, like endurance. They won't be dismayed by an ad in which a thin woman receives a piece of exercise equipment and appears visibly unchanged after a year.

A truly offensive ad, he said, would upset even those within a company's target demographic.

He recalls widespread outrage to a Nivea ad with the phrase: "White is purity." The company apologized and pulled the ad.

The negative response to Peloton's ad seems to be overblown, said Alan Middleton, a marketing professor at York University's Schulich School of Business in Toronto.

Some of the backlash centres on the gender roles, with the men bestowing the bike to his wife, he said.

But women appear to compose the company's target demographic, Middleton noted, citing the company's other ads and websites that predominantly feature female consumers. So in the context of a holiday advertisement that centres on a gift exchange, it made sense for the woman to receive the present, he said.

"We're trying to incite men to give a gift to their wives or girlfriends," he said.

The Peloton spot generated so much publicity that the actor who portrayed the wife was featured in a commercial for Aviation Gin, of which Canadian actor Ryan Reynolds is a stakeholder. It shows the woman sitting at a bar with two friends as they celebrate "new beginnings." It's a wink to the Peloton ad, implying she's left her husband as her friend quips, "you look great by the way." Reynolds tweeted the ad with the phrase: "exercise bike not included."

Even that serves Peloton's interests, said Soberman. Viewers will associate the actor with the Peloton ad, which will fuel further conversations.

There's a low level of risk that the Peloton backlash will hurt the company, said Middleton. Brands' reputations can be damaged by negative publicity, he said, but in this case, it's likely not a big enough issue.

The buzz it has generated is more likely to help the company, he added.

"It will put Peloton into people's minds more," he said, adding he can think of a few people in his life who might ask their loved ones if they've seen the ad, while mentioning they wouldn't mind that gift this year.