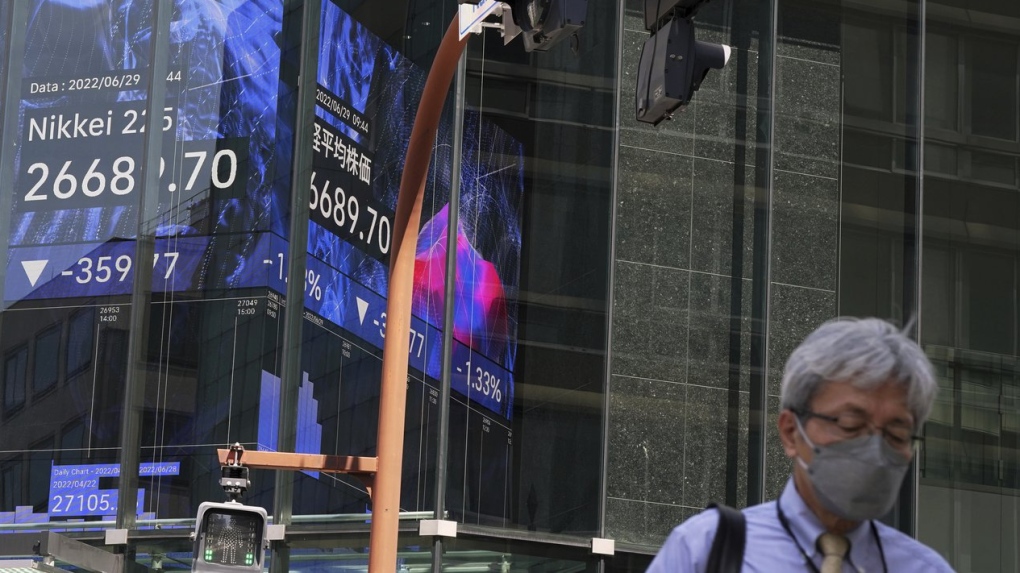 The government reported Wednesday that the economy shrank at a 1.6 per cent annual pace in the first three months of the year.

At a European Central Bank forum in Portugal, Powell repeated his hope that the Fed can achieve a so-called soft landing: raising interest rates just enough to slow the economy and rein in surging consumer prices without causing a recession and sharply raising the unemployment rate.

But, he said the path to achieving that goal has become more difficult and there's "no guarantee" the central bank can tame runaway inflation without hurting the job market.

Anish Chopra, managing director with Portfolio Management Corp., said it doesn't appear like the market believes a soft landing is possible amid some negative macroeconomic data about slowing economic growth.

"The Federal Reserve is looking like it's going to continue down its rate path of 75 basis point increases. That just slows global growth, slows oil demand, and that's had an impact on the price of oil, which is down," he said in an interview.

Energy was the biggest laggard, losing 3.7 per cent as crude oil prices slumped with Crescent Point Energy Corp. off 7.6 per cent and Tamarack Valley Energy Ltd. down 6.6 per cent.

The Canadian dollar traded for 77.65 cents US compared with 77.74 cents US on Tuesday.

The TSX is down 14 per cent so far in 2022 and 13 per cent lower in the second quarter, but U.S. markets are on track to have the worst quarters since at least the 2020 pandemic.

With one day left in the second quarter, the S&P 500 is down nearly 16 per cent over three months and 20 per cent for the year; Nasdaq is down 21 per cent in the quarter and nearly 29 per cent for the half-year; and the Dow is off 10.5 and almost 15 per cent, respectively.

"If you look at the performance of all of these markets ... over the last six months, it's been a tough go for the indices and a tough go for investors," said Chopra.

Technology lost 2.2 per cent with Shopify Inc. down nearly 91 per cent following a 10-for-1 stock split.

Despite a drop in bond yields, the growth sector is under pressure from Fed comments about the central bank continuing down the path of increasing rates.

"It just could be that we're going to see these 75 basis point increases going forward for a little bit and then unless you get inflation coming back, it'll be hard to see the Federal Reserve dropping down to less than 75 basis points," Chopra added.

The August gold contract was down US$3.70 at US$1,817.50 an ounce and the September copper contract was essentially flat at US$3.78 a pound.

Consumer staples, industrials and telecommunications were the only sectors in positive territory on the day.

This report by The Canadian Press was first published June 29, 2022