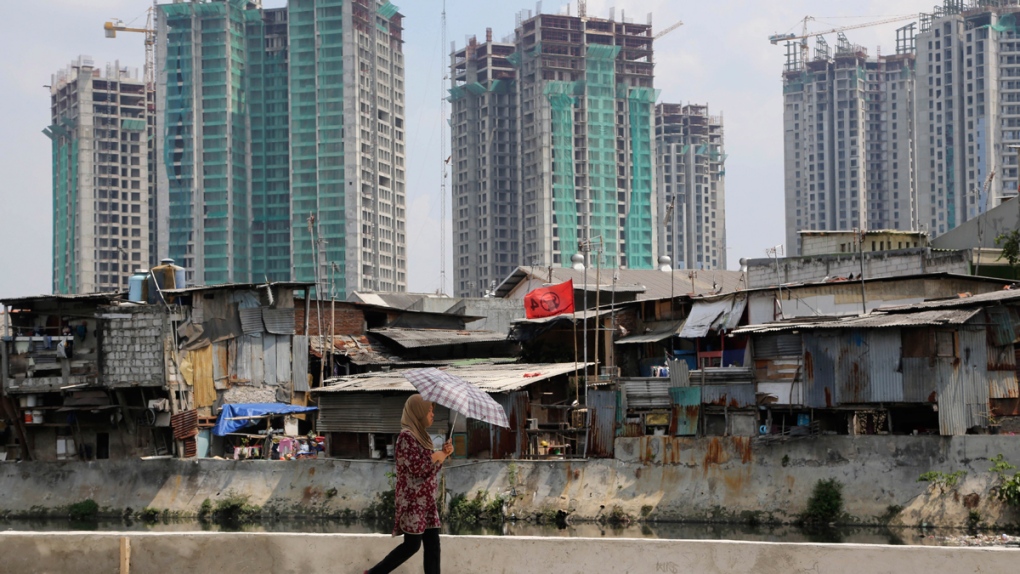 Office and apartment construction is seen in the background at a slum in Jakarta, Indonesia, on Aug. 14, 2014. (AP / Tatan Syuflana)

JAKARTA, Indonesia -- Down a concrete path, between rail tracks that buzz with each approaching train and a river choked by plastic and raw sewage, Asih Binti Arif cradles her baby and reflects on dreams gone dark.

Five years ago, Arif and her husband left impoverished Madura Island, joining the stream of migrants from across the vast Indonesian archipelago seeking a better life in its capital.

Across the developing world, migration from country to city has long been a potential path out of poverty. Less and less is that true for Arif and millions of others in Asia, where the wealth gap is growing in many of the most densely populated cities in human history.

Experts say the trend could worsen as a widening gulf between the richest and everyone else undercuts efforts to reduce poverty, bringing a litany of problems: poorer health, less education, more family breakups, crime and unstable societies.

"With inequality, the impact of growth on poverty eradication is muted," said Indu Bhushan, an Asian Development Bank official.

Against the backdrop of gleaming office towers and luxury hotels, Arif's family lives in the sprawling Tanah Abang slum. They scavenge the garbage of those who can afford to discard plastic bottles, cardboard boxes and frayed clothes.

"I can't even dream of that life," Arif said. "The gap is so big. They are in the sky and we are on the earth."

Asia's ultra-rich, with their private jets, yachts and platoons of servants, are matching if not outdoing their counterparts elsewhere in the world, inviting famous pop stars to perform at their birthday bashes, building their own museums and collecting mansions.

Rising industries such as online commerce have made some business mavericks enormously wealthy. Most of Asia's richest, however, are second- and third-generation beneficiaries of family fortunes.

In past decades, the power of industrialization allowed hundreds of million to emerge from extreme poverty.

But vast numbers cannot aspire to rise much further. About 80 per cent of the 3.6 billion people in developing Asian countries still live on less than $5 a day, many relying on day labour, rag picking or other meagre livelihoods.

Even migrants who arrived in cities years ago feel trapped in a seemingly permanent underclass.

In chaotic Mumbai, India's financial capital, Pandurang Bithobha Salvi, 52, is a veteran migrant from Naganwadi, a village 500 kilometres (300 miles) away in Maharashtra state.

Salvi and 20-odd men share the $130 a month rent on their 17-square-meter (180-square-foot) room festooned with drying shirts and pants. Sleeping arrangements are a nightly conundrum. Despite India's ascent as a centre for business outsourcing, migrants like Salvi can only find low-paying work.

Across town on the tony Altamount Road, billionaire Mukesh Ambani and his family luxuriate in an expansive 400,000-square-foot (37,000-square-meter) super home.

Three years ago, Ambani moved into the purpose built 27-story tower with its three helipads, a movie theatre, a two-story recreation centre and a reported price tag of more than $1 billion.

It is one of the world's most expensive residences in a city where 40 per cent of 20.7 million people live in slums without basic sanitation such as toilets.

"In the past, some of us have made a better life for ourselves and our families," said Salvi. "But such cases are becoming rarer now."

Using a scale of zero to 100, where zero means everyone has exactly the same wealth and 100 means a single person has all the wealth, Indonesia's inequality score rose to 41.3 in 2013 from 30.8 in 1999. Such sharp increases, which reflect wealth concentrating in fewer hands, have occurred in India, China and elsewhere, too.

The challenges are acute for countries such as Myanmar that are latecomers to industrialization.

A treasure land of gems and timber, Myanmar's economy stagnated for decades under generals who yielded power in 2011.

The economic reforms since then are transforming the skyline of its biggest city, Yangon, but not the lives of people like Thein Tun Oo and his wife Thin Thin Khaing, whose extended family of 10 ekes out a living from a one-room bamboo shack perched on the muddy banks of a creek.

Thein Tun Oo wagered everything in moving five years ago to Yangon from Bago, a region 100 kilometres (60 miles) to the north. There is little to show for the effort.

Asked what will come of Myanmar's reforms, including plans for factory parks that might provide better-paying jobs, Thin Thin Khaing and her husband burst out laughing.

In Indonesia, the increasing ostentation of the wealthy is a potential lightning rod for social strife.

Socialite Amanda Subagio, whose father founded a telecommunications and satellite empire, said the flaunting of extravagant wealth is deepening dissatisfaction among poor Indonesians.

"You should be at least aware of how other people are living in this country," she said.

The "other people" are those like Arif, the scrap collector in Jakarta's slum, and her neighbour, Samia Dewi Baturara, who share the same shack divided by a plywood wall.

Unlike Arif, Baturara still allows herself to dream.

As she peddles coffee from a stall opposite the luxury Shangri-La hotel, Baturara stares at the windows and pictures herself as part of the exclusive world inside. She would have to work 40 days, without spending a penny, to be able to afford just one night in the cheapest room.

"Almost every day, I imagine how I can sleep there."