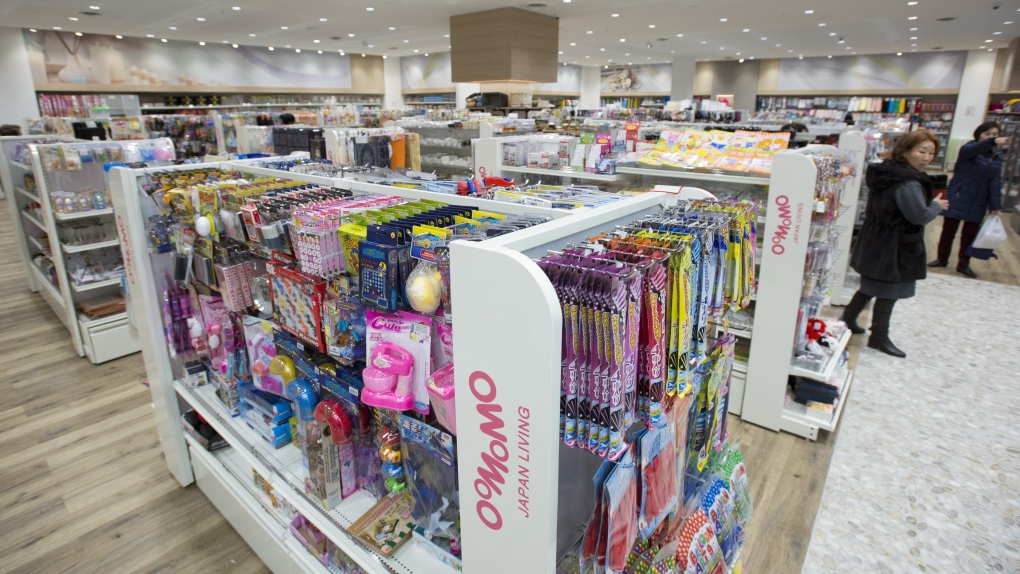 The inside of a Oomomo store is pictured in Burnaby, B.C., Monday, Jan 21, 2019. (THE CANADIAN PRESS / Jonathan Hayward)

TORONTO -- When discount store Oomomo flung open the doors to its first Toronto location in early December, customers lined up well in advance to scoop up everything from low-cost origami paper and shrimp-flavoured chips to vegetable peelers and toothbrushes.

Oomomo's president Andy Cheng expects the scene will repeat dozens of times as the Vancouver-based purveyor of Japanese goods expands beyond its current four stores in Canada to open about 30 in the country over the next three years.

"We have customers asking us if we can open as many as possible and make it as huge and giant as possible," he said of the brand that sells mostly Daiso and Seria products for $2, but prices some up to $15. "We are not trying to take over the market, but we want to focus on bringing Oomomo to every major province and city."

Oomomo is part of a growing group of Asian-centric retailers selling affordable household goods that are expanding in Canada, quickly conjuring up loyal customer bases with big plans to conquer the market in little time.

Miniso -- a Chinese discount brand masquerading as a Japanese company -- has the most ambitious goal in mind: 500 stores by the end of 2020. Despite a recent court case threatening to force the Canadian operators into bankruptcy over allegations that they fraudulently transferred registered trademark rights to third-party corporations and disposed of inventory, Miniso has already opened 50 stores in Canada since its December 2017 launch in the country.

Muji, whose stores are more fashion-centric and expensive than Miniso but still marketed as affordable, has more pared down expectations. Vice-president Shogo Okazeri said Muji hopes to grow the eight stores it has opened in B.C. and Ontario to 30 by 2025. Okazeri named Alberta and Quebec as target markets for the expansion.

Experts say such rapid growth in the market is being fuelled by Canada's diverse population and the increasing demand for both innovations and discounts -- a hallmark of items produced in Asia, where labour is much cheaper and access to inexpensive manufacturing materials is greater.

"I picked up a couple of things that I hadn't seen before at Muji that solved a little problem for me because I hadn't seen anything quite like it," said Michael LeBlanc, a senior retail adviser at the Retail Council of Canada.

"Canadians love a good value proposition and (at these stores) the price points are right, the assortment is unique and they offer different solutions."

The expansion of Asian retailers has been no surprise for LeBlanc because he said the country has really transformed itself into a top shopping destination.

That excitement around Canada came even as retailers' cross-border expansion into new markets declined by 2.9 per cent from the year before, CBRE said.

Oomomo's Cheng was keen on starting his company in Canada instead of Asia because of Canada's multiculturalism. Half of Canada's foreign-born population hailed from Asia in 2016, according to Statistics Canada.

"We have a lot of Asian population and also a lot of local, Canadian customers that like to learn about the lifestyle of other cultures and how they do little things around the house," said Cheng.

It's an observation he shares with Muji's Shogo Okazeri, who said Muji quickly discovered Canada has "a growing interest for a simple lifestyle and for products without branding, a trend that is found in traditional Japanese culture."

He also found multiculturalism was playing a large role in retail.

"We didn't expect that it would have such an impact, but after expanding in Canada, we realized that many people actually knew MUJI because they discovered it when travelling abroad," he said in an email to The Canadian Press.

"As a result, we have been receiving requests to open stores in various areas we didn't necessarily think about at first."

Oomomo has also been seeing demand to expand to new cities and suspects the market can sustain further growth because of the success enjoyed by companies like Dollarama Inc.

However, Cheng is insistent he doesn't consider Dollarama a competitor because he said both suit different kinds of customers that will shop at both stores.

"When I need something quick I go into a dollar store, but when I am at a store like Oomomo, I spend an hour at the store just to stop and look around at stuff I haven't seen before."

He similarly brushed off concerns about rivals including Miniso and Muji.

"I haven't talked to anyone who after purchasing something from our store said we are not going to go to the other store," he said. "We are not in direct competition."