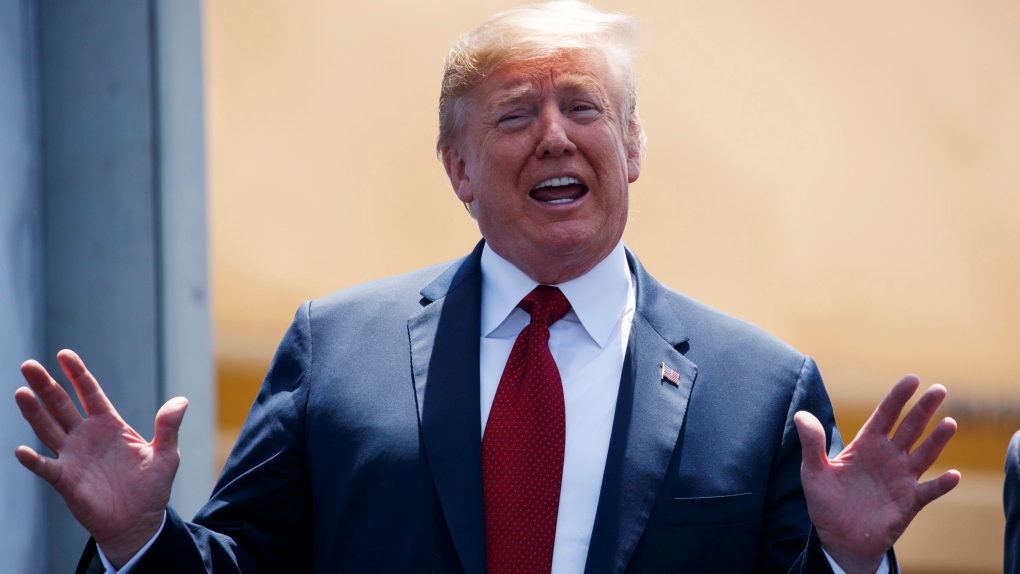 MT. PLEASANT, Wis. -- U.S. President Donald Trump highlighted his economic policies Thursday at the groundbreaking for a massive $10 billion Foxconn factory complex that may bring thousands of jobs to Wisconsin, a state he barely carried in the 2016 presidential election. At the same time, Trump kept up his running feud with an iconic American company based in the state.

"America is open for business more than it has ever been open for business. Made in the USA: It's all happening and it's happening very, very quickly," Trump thundered after visiting the future Foxconn factory in Wisconsin. "Today we're seeing the results of the pro-America agenda. America First, Make America Great Again. Greatest phrase ever used in politics, I suspect."

Trump's celebration came against a backdrop of less-rosy economic news: Harley-Davidson recently announced it is moving some motorcycle production overseas to avoid European Union tariffs that are a product of Trump's escalating trade dispute with long-standing U.S. allies.

The president was irked by the Milwaukee-based company's announcement this week and tweeted about it for three days, writing that any shift in production "will be the beginning of the end" for the American manufacturer and even threatening retaliatory taxes.

Trump diverted from his upbeat message Thursday to work in a message to the motorcycle manufacturer.

Earlier, in a local television interview, Trump said he was "disappointed" in the iconic motorcycle manufacturer.

Trump highlighted Foxconn's investment in the U.S. as statistics show an overall decline in the purchase or construction of factories and facilities in America by foreign companies.

Such investment fell 40 per cent last year after hitting record levels in 2015 and 2016, according to U.S. government data analyzed by the Organization for International Investment. The organization represents large overseas companies such as Toyota, Nestle and Sony. Foreign investment remained weak in the first three months of 2018.

Trump's speech -- as his speeches often do -- meandered from topic to topic, including riffs about his responsibility to pick a new Supreme Court justice, his close relationship with Chinese President Xi Jinping and talk that his 2020 campaign hats will bear the slogan "Keep America Great!" and perhaps be colored green, "representing cash," instead of 2016's trademark red.

He also boasted that he was the first Republican to capture Wisconsin since 1952. In fact, the GOP had since won the state with Ronald Reagan, Richard Nixon and Dwight Eisenhower.

Trump's presence in Wisconsin was the subject of protests both in Milwaukee, where he spent a rare weeknight away from the White House, and in Mount Pleasant.

Chants of "Hey, hey, ho, ho. Donald Trump has got to go" were heard near the Pfister Hotel, where Trump overnighted and attended a pair of closed-door campaign events before heading to the groundbreaking and tour of an existing Foxconn facility. Republican Gov. Scott Walker and House Speaker Paul Ryan, R-Wis., were among those joining the president at the fundraisers and Foxconn event.

About 50 people walked from a downtown park to the roped-off hotel, hoping Trump heard their calls to reunite migrant families separated at the U.S.-Mexico border.

As the president hobnobbed with supporters, his wife, Melania, was making her second trip in a week to the southern border to visit detention centres housing migrant children.

Trump, for his part, defended his decision to put tariffs on steel and aluminum and showcased his business-friendly agenda.

Foxconn is the world's largest electronics contract manufacturer and assembles Apple iPhones and other products for tech companies. Based in Taiwan, it chose Wisconsin after being prodded by Trump and others, including Ryan, whose district will include the plant.

The project could employ up to 13,000 people, though opponents say it is costing Wisconsin taxpayers too much.

The ceremonial groundbreaking was supposed to be evidence that a manufacturing revival fueled by Trump's "America First" policy is well underway. But Harley-Davidson's announcement, spurred by the trans-Atlantic tariff fight, sent a conflicting message.

Trump carried Wisconsin by less than 1 point -- just under 23,000 votes -- in 2016. He's underwater in popularity now, with 44 per cent of respondents in last week's Marquette University Law School poll approving of the job he's doing, while 50 per cent disapproved.