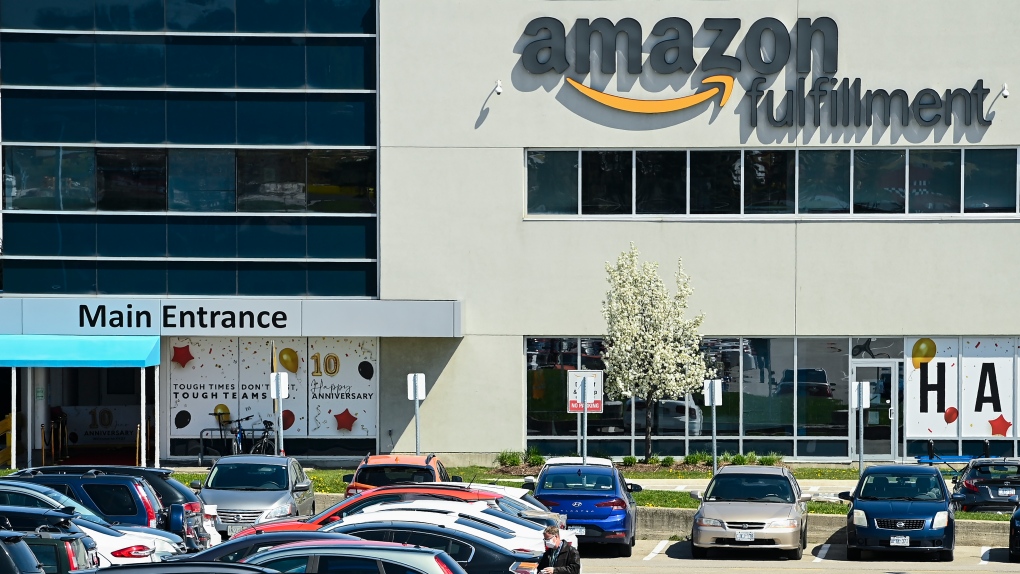 A person walks through a full parking lot at one of the Amazon Fulfillment Centres during the during the COVID-19 pandemic in Mississauga, Ont., on Monday, April 26, 2021. THE CANADIAN PRESS/Nathan Denette
CALGARY -

Amazon Canada is hiking wages as it seeks to fill thousands of new jobs against the backdrop of a labour market that has been dramatically altered by the COVID-19 pandemic.

The e-commerce giant said Monday it will hire 15,000 new warehouse and distribution workers in communities across the country this fall to support its ongoing Canadian expansion plans.

Amazon also announced it will increase the starting wage for its front-line, hourly employees in Canada to between $17 an hour and $21.65 an hour, up from its current starting wage of around $16 an hour.

Existing employees will also receive an additional $1.60 to $2.20 per hour, starting immediately, Amazon said, regardless of how long they've been with the company.

"We are growing very rapidly in the country," said Sumegha Kumar, director of Canadian customer fulfilment operations for Amazon Canada, in an interview.

"Our business is expanding a lot, and we want to continue to stay focused on our customers, so we obviously have needs around hiring and retaining top talent."

Amazon Canada currently has 25,000 full-time and part-time employees in 25 communities across five provinces. The company is growing rapidly due to the COVID-19 pandemic and the resulting boom in online shopping. Amazon now has 46 warehouse, logistics and delivery facilities in Canada compared with 30 in mid-2020. More growth announcements are expected later this year, according to the company.

Amazon's expansion plans come amid significant labour shortages in certain segments of the economy. According to Statistics Canada, the country added 90,200 jobs in August, bringing the unemployment rate to 7.1 per cent -- the lowest level since the onset of the pandemic last year.

But not all those jobs are being filled. TD senior economist Sri Thanabalasingam said Friday that labour supply hasn't kept pace with the robust demand for workers in high-touch industries like retail and food service, and that is resulting in staff shortages.

"Career changes, and ongoing health concerns could be possible reasons for the lack of available workers," he said.

Kumar declined to say if Amazon is encountering a labour shortage in Canada, though she acknowledged "there are some places where we have more of an opportunity than others" to fill vacant positions. She said raising wages is one way to ensure the company stays competitive.

"We will always continue to look at how our market is progressing and make the necessary investments in our compensation structure," she said.

Earlier this year, Amazon announced it will boost wages for its new U.S. hires to US$17 an hour, as it seeks to add 75,000 new workers in that country.

Other companies south of the border, including McDonald's, Costco and Walmart have also boosted wages to attract more applicants and keep up with a flood of customers as pandemic restrictions ease.

Don Drummond, an economist at the School of Policy Studies at Queen's University in Kingston, Ont., said these employers have no choice but to raise wages. Not only has the risk of catching COVID on the job made people more reluctant to work for minimum wage, but the pool of potential employees is smaller than it might have been due to border restrictions and a decline in international migration during the pandemic.

"A disproportionate supplier of these lower wage jobs is recent immigrants. And that's been basically cut to zero in the last 18 months," he said.

Drummond added employers grappling with labour shortages need to not only look at improving their base pay, but at offering benefits like health and dental coverage for hourly employees.

"Because that's a lot of what you hear from workers," he said. "It's not just that the wages are really low, it's that a lot of employers in that minimum wage group have stripped out a lot of the benefits they once had."

The COVID-19 pandemic has altered the balance of power between employees and employers, said Richard Powers, associate professor with the Rotman School of Management at the University of Toronto.

"These changes we're seeing now, it's unlikely they're going to be clawed back because of the reputation risk of trying to do something like that. These new wage standards . . . are here to stay," he said.

More large companies will likely announce wage increases in the coming months, Powers said. Smaller businesses that can't compete on wages will need to ensure they're offering other perks, such as a more enjoyable working environment, in order to keep up.

Wage increases by some employers may also increase the likelihood of unionization at companies where management is not responding to changing labour force dynamics, Powers said.

"At those companies that are not following suit (with wage increases), I think the influence of organized labour groups may play a greater role going forward," he said.

Amazon says it offers access to health, dental and vision benefits, as well as training and education programs to all employees regardless of their position or tenure.

Amazon is also offering a $100 bonus for new and current employees who show proof of COVID-19 vaccination. The company experienced ongoing outbreaks of the virus at several of its facilities throughout the pandemic.

Amazon has not mandated vaccinations for its employees.

-- With files from Jordan Press and The Associated Press

This report by The Canadian Press was first published Sept. 13, 2021.

This is a corrected story. A previous version contained incorrect wage increase details.